More than 1 million pounds of concrete and 4.5 miles of rebar reinforcement were used to construct the observatory, just adjacent to the Rancho Mirage Library.
PHOTOGRAPH BY MARK DAVIDSON

Eric McLaughlin recalls going to an observatory to view the stars, but what he saw instead was his future.

“I was looking through an area that had people working in it, and an old retired astronomer came over to the door and just invited the few people that were there back and showed them around,” McLaughin recalls. “He was just very happy to do so. It was that passion that really was infectious.”

McLaughlin brings that type of hands-on interaction to his position as city astronomer for the Rancho Mirage Library and Observatory, which opened in March and is just beginning to flex its programming capabilities. His mission is to demystify the cosmos for interplanetary enthusiasts both young and young at heart. “There’s so many different ways we can go with it and we as an entire organization haven’t written in stone every little thing we’re doing,” he says. “So we actually get to grow the program from the ground up and take it as many different ways and use as much innovation as possible in the programming.”

VIDEO: Take a tour of the observatory with City Astronomer Eric McLaughlin.

The state-of-the-art structure cost just over $4.2 million to build, according to the Rancho Mirage website, and was financed entirely from municipal funds that the city says would have been returned to the state had they not been spent locally. The observatory was designed with the assistance of the California Institute of Technology and with support from the staff of Mt. Palomar Observatory. The location is so close to Highway 111 that at first it may seem improbable to deliver a quality view, but actually Rancho Mirage has far less light pollution than other desert cities like Palm Springs and Palm Desert.

“This particular site is quite good inside the valley itself,” McLaughlin says, “and we’ve been able to take phenomenal images of deep space already. The telescope was chosen so it can actually overcome anything going on in the sky. It is phenomenally capable of resolving deep-space objects and collecting enough light to see very dim objects.”

At the observatory’s heart is a 27-inch Plane Wave CDK telescope with remote-controlled technology within a remarkable architectural design. The telescope is mounted on a 150-ton concrete core that extends below ground level to achieve maximum stability and ensure clarity of the images captured through the telescopic lens. The metallic dome that surrounds the telescope can be made to revolve with the touch of a button and a portion of its curved roof retracts so that the telescope can be trained on the desired portion of the night sky under observation. Inside the dome, lighting and climate conditions are also controlled to help achieve best planetary and intergalactic visibility.

McLaughlin’s outlook on observing the stars is a mix of practical and philosophical, with a bit of Star Trek throw in: “If you look throughout human history, the thing that has really driven our expansion and the development of our civilizations has been to go where no one has gone before to actually seek out unknown things,” he says, “and the draw of space, it really is the next step. It is everything in essence. Because when you actually look out or you go out and look back, the earth itself becomes a rather small isolated space into which we have crammed everything. As such space itself provides a whole wealth of literally everything.” 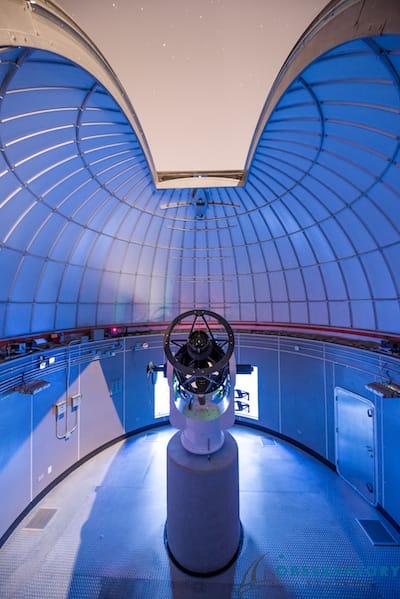 Back on the desert floor, it wouldn’t be a Southern California astronomical observatory without a suitably posh outdoor stargazing deck. This one features a quartet of telescope pads where you can park your own telescope during one of the regularly scheduled stargazing parties. Eventually the Rancho Mirage Library and Observatory will be purchasing four telescopes with cameras for the public to use on the deck. Looking ahead, McLaughlin says the observatory will be getting a complement of small telescopes to be able to have a variety of different objects viewed simultaneously from the deck. A solar telescope is also on order “so we can have near live images transmitted from the observatory into the library on a near daily basis.” 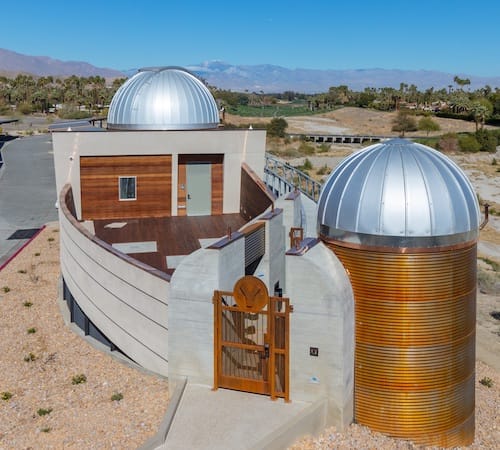 The initial dome structure as you enter the observatory space is a bathroom.

Through the summer, observatory programs are scheduled for 7 p.m. Tuesdays in the library’s Community Room. The stargazing parties, which are limited to 40 participants and require online registration, are scheduled on selected evenings at 8:30 p.m. You can also have a look at the high-tech observatory itself during daylight hours. Tour are offered four times on weekdays, Monday to Friday at 9:30 a.m., 10 a.m., 5 p.m., and 5:30 p.m.