The Rancho Mirage Observatory, located adjacent to the city’s Library, opened in March 2018 and invites the public to explore the interstellar intricacies of our universe.
PHOTOGRAPHS BY MARK DAVIDSON AND EDWARD GONZALES

For over 10 years, an architecturally striking building on the north side of Highway 111 has caught motorists’ eyes as they travel through Rancho Mirage. This fair city’s stunning Library has been a magnet from day one. Recently, a distinct and equally fascinating structure has risen alongside the Library. Bookended by two prominent domes and almost nautical in appearance, the new Rancho Mirage Observatory is the latest addition to the Library campus. The eagerly anticipated facility opened in March 2018 amid great fanfare. Of all the enhancements Rancho Mirage has succeeded in providing the community in recent years, this one stands apart. By introducing an Observatory, the City of Rancho Mirage is quite literally reaching for the stars.

The impulse to look up at the skies is as old as civilization itself. In ancient times, decoding the skies was an attempt to understand the language of the gods. By the 17th century, Galileo and Kepler were establishing the roots of modern science and astronomy. Fascination with the motion of the planets and the nature of the stars has only increased as science has evolved. Enter the Rancho Mirage Observatory — a marvelous, state-of-the-art facility that was specifically designed and intended to provide enhanced educational opportunities.

The intriguing-looking Observatory, which includes an outdoor viewing deck, stands proudly on a parcel of land that was specifically selected for its dark night skies. The larger of the two domes houses a research-grade 27.5-inch telescope — the PlaneWave CDK700 — a revolutionary optical system featuring innovative technology. Fortuitously, the Rancho Mirage Library & Observatory campus perfectly sets the stage for an exceptional confluence of stargazing and lifelong learning opportunities. If early attendance numbers are any indication, there is no end in sight to people’s yearning to explore the cosmos.

“Since we’ve first opened our doors we have seen a diverse set of visitors. No matter your age, race, socioeconomic class, or level of astronomy knowledge, the Observatory is here to fulfill your desire to learn,” says Aaron Espinosa, Rancho Mirage Library & Observatory Director. Close to 800 people toured the facility on opening day. Since April, an average of 308 visitors per month have enjoyed guided tours of the facility and an average of 189 visitors per month have participated in Observatory programming in the manner of lectures and films. Meanwhile, demand for scheduled stargazing parties — astronomer-led evening affairs limited to 40 participants and typically booked within mere minutes of becoming available — has been astronomical, pun intended. All of these offerings are free to the public. There is every reason to expect a steep increase in visitors in coming months as the Rancho Mirage Library & Observatory continues to expand their celestially-themed programming. 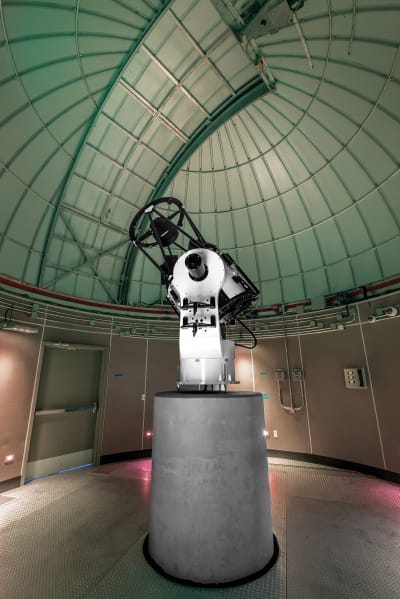 The Rancho Mirage Observatory is the first to share a library campus in the state of California. In April, it was noted as the best new tourist attraction in the state on msn.com’s annual roundup of compelling attractions opening across the United States. It is yet another draw for people who may not have ventured to Rancho Mirage before, and in the case of previous visitors, presents all the more reason to come again. This wondrous facility has stirred interest among local residents and caught the attention of those in the greater astronomy community as well. In fact, scientist Eric McLaughlin landed the prestigious job of resident Astronomer. He is thrilled to ply his trade at a research-level facility that focuses on educating the public about the wonders of the cosmos.

In many ways, curiosity drives tourism, and the Rancho Mirage Library & Observatory has certainly ignited a spark. “The curiosity that is associated with tourism is also vital to the Library & Observatory’s mission, which is to encourage lifelong learning,” McLaughlin says. “Instilling an actual wonder in the universe proves to be educational because it drives people to want to find out more. They ask me questions and seek direction about further avenues they can take.” He is sure to be fielding some questions from eager students from all three Coachella Valley school districts as well as some independent institutions this year. Fifth-grade classes throughout the Coachella Valley will get a chance to visit the Observatory courtesy of a $25,000 grant recently awarded the Library by the Anderson Children’s Foundation.

The further avenues McLaughlin suggests might take the shape of borrowing subject-specific books or attending one of the astronomy-themed lectures at the adjacent Library. If patrons are not already acquainted with the astounding array of free resources and programming the Rancho Mirage Library offers, they will soon become familiar. Between the helpful databases, e-books, streaming video, children’s programming, live musical performances, thought-provoking lectures, film screenings, and so much more, the Rancho Mirage Library redefines all existing notions of a library. The Rancho Mirage Library & Observatory campus has evolved into an incredible community asset. Both entities stand ready and waiting to serve all who walk through their doors.

In many ways, curiosity drives tourism, and the Rancho Mirage Library & Observatory has certainly ignited a spark.

The desire to understand and decipher the heavens has been an ongoing quest throughout time. Fortunately, scientific tools and technologies that our ancestors never had access to are available to us today. The City of Rancho Mirage, and by extension its City Council, is proud to be on the cutting edge and to have recognized the viability of an observatory within city limits. The unique collaboration between the city-owned Library and Observatory presents endless opportunities for cosmic exploration and lifelong learning. The City was fortunate enough to have Dan McKenna, Superintendent of the California Institute of Technology’s famed Mount Palomar Observatory in San Diego County, serve as a primary consultant during the design phase of the Rancho Mirage Observatory. Perhaps McKenna summed it up best in saying that the Rancho Mirage Observatory would ultimately allow visitors to “harvest starlight and convert it to knowledge.” 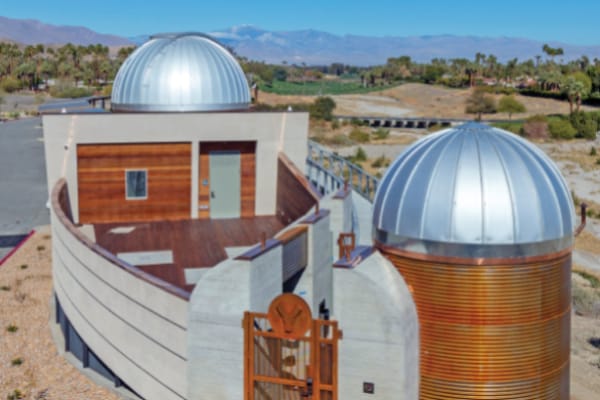 The Rancho Mirage Observatory was built to last. The materials used were selected for their durability and resistance to this harsh climate. The outdoor exhibit deck is made of Brazilian Ipe wood, which has a low heat retention and cools quickly, making it perfectly suited to withstand the desert sun.