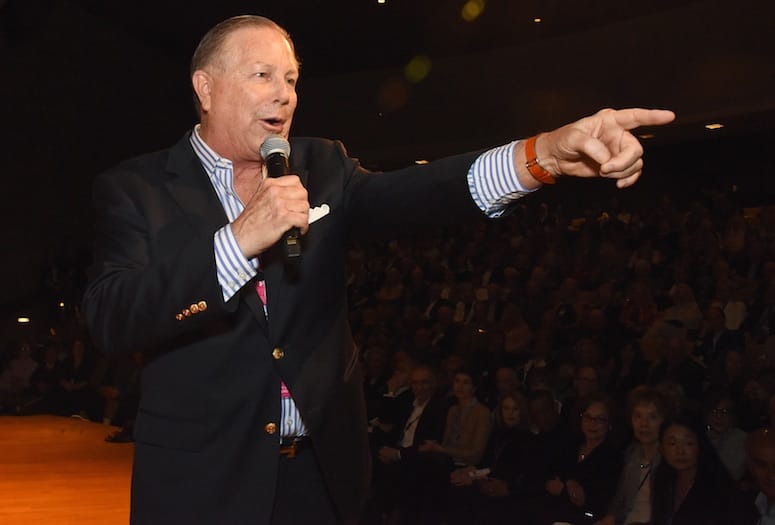 The annual Rancho Mirage Writers Festival began on a high note as more than 400 Festival Angels and major supporters gathered at the Helene Galen Auditorium Annenberg Health Sciences Building at Eisenhower for a dinner sponsored by Harold Matzner of Spencer’s and the first of many stimulating programs. Angels are benefactors who donate $5,000–$50,000 and are the major supporters of the festival.

Kabler also thanked Susan Eisenhower for attending the event and inspiring the idea to make Word War II the theme of the festival in honor of the 75th anniversary of D-Day.

This was followed by an outstanding program of dialogs between the humorous and intelligent Maureen Dowd in conversation with the iconic Tom Hanks. Dowd diligently played her role as the New York Times op-ed columnist who specializes in American politics and culture by asking Hanks the first thing he would do if elected president of the United States. Hanks, with his quick wit, intelligence, and devilish attitude, answered, “I’d change the name of Fred Waring Drive to Tom Hanks Drive.” This opening set the tone for the evening’s conversations centered on the state of affairs in our country in present times.

The second half of the program featured Geoffrey Cowan, the director of the center on communication leadership and policy at USC Annenberg Center and a best-selling author, moderating a panel that consisted of presidential historians and journalists Douglas Brinkley, Jon Meacham, Karl Rove, and Bret Stephens.

Each guest gave their perspective of what “presidential” really means and how they evaluate a presidency. CNN’s Douglas Binkley noted the value of the Rancho Mirage Writers Festival by saying that society’s current focus is on visual imagery more than the written word.  This festival is filling a void in today’s world by honoring the written word.