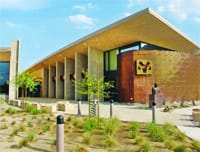 Rancho Mirage has a tradition of giving. Longtime residents such as the Honorable and Mrs. Walter Annenberg, former President and Mrs. Gerald Ford, and Frank and Barbara Sinatra have always given generously. The Rancho Mirage Public Library, Children’s Discovery Museum of the Desert, and Eisenhower Medical Center are just a few of the community’s grateful recipients.

“As one of the first residents in Rancho Mirage, it has been amazing for me to witness its transformation from a small town into a thriving city. My late husband Walter and I have been honored to support the many worthy cultural and social entities that have brought so much pleasure and assistance to the citizens who live in and visit this beautiful desert oasis. Rancho Mirage has been my winter home since 1966 and a wonderful part of my life,” remarks Mrs. Lenore Annenberg, wife of the late Ambassador Walter Annenberg.

The City of Rancho Mirage, with a permanent population of 16,672 which doubles during the winter, may be one of the valley’s smaller cities, yet its history of helping organizations across the valley is a long one. Rancho Mirage’s support positively impacts all ages in the community. Richard W. Kite, Mayor of Rancho Mirage, says, “Beginning in 1976, when the City Council first made the decision to joint venture with the Cities of Palm Desert and Indian Wells to contribute over $1.5 million toward the construction of the Children’s Discovery Museum of the Desert here in Rancho Mirage, we have focused on making our financial resources available for the betterment of our community.”

Rancho Mirage has supported the Children’s Discovery Museum for more than a decade, allowing the museum to truly serve the valley’s families. “The city has always been very supportive to us financially. Each time we’ve approached them with a special assistance request, they’ve been interested in the programs we offer and very generous in helping support those programs,” observes Lee Vanderbeck, Executive Director.

Rancho Mirage’s most visible example of providing residents with a superior lifestyle through special services and amenities is the new Rancho Mirage Public Library, which opened in January. The land was generously donated by the Annenbergs shortly before the ambassador’s death. The strikingly designed 36,000-square-foot structure has become one of the highest-ranked libraries in the State of California.

The City of Rancho Mirage spent almost $13 million on the library’s construction. The entire amount was funded from the city’s Redevelopment Agency — a perfect example of a city spending wisely. Various features included in the library are: more than 125,000 volumes, a large 350-seat community room, 40 computer workstations, wireless network access for laptop users, a large children’s area with separate story-time room, and an outdoor amphitheater for special community programs. The library has become a community destination.

Another major high-profile project in the works is the recently approved Regional YMCA Recreation and Fitness Complex. An important addition to the community, the YMCA will serve youth, families and seniors. It will be located on a city-owned 25-acre site located just west of the Monterey Marketplace. A five-acre site will be donated for the new 44,000-square-foot facility with a $12 million price tag. In keeping with tradition, Rancho Mirage will also contribute up to $3 million in building costs and handle all off-site improvements.

“The city and the YMCA will joint venture to provide a recreation and fitness facility to meet the ever-changing demographics of our city,” says Mayor Kite.

It’s not surprising that Barbara and Frank Sinatra chose the Eisenhower campus for the Barbara Sinatra Children’s Center.

“When Frank and I founded the nonprofit Barbara Sinatra Children’s Center at Eisenhower in October 1986, we knew we were blessed to locate the center in Rancho Mirage,” reflects Mrs. Sinatra. “Community residents, businesses and leaders have been wonderfully generous through the years. Our state-of-the-art 12,500-square-foot facility provides counseling for physically, sexually, and emotionally abused children and focuses on prevention, community education, and breaking the cycle of abuse. There is much to be done, but we know with the help of our neighbors, abused children from throughout the Coachella Valley are being given hope for lives of harmony and health.”

Rancho Mirage cares about its citizens of all ages and provides several affordable senior-housing options. The newest facility, scheduled to open this fall, is Santa Rosa Villas, a beautifully landscaped, gated community of 33 single-story detached units with attached garages, a community pool and spa, private patios, and clubhouse amenities.

ancho Mirage also offers a Home Improvement Program to income-qualifying seniors to receive financial assistance for home improvements. The City of Rancho Mirage and the Housing Authority are committed to a public policy that recognizes the importance of improving and maintaining the condition of  residential units within its boundaries.

Each year, the city provides funding through its Special Assistance Funds for services, which improves the quality of life for Rancho Mirage and valley residents. Some of those services include the Arthritis Foundation, Cathedral City Senior Center, Boys and Girls Club, Desert AIDS Project, Food in Need of Distribution, Martha’s Village and Kitchen, Shelter From the Storm, and the United Way. Over the past three fiscal years, 27 different local nonprofits received more than $500,000 in Special Assistance Funds.

Rancho Mirage is a city that realizes the importance of reinvesting in the community to ensure it remains as perfect as it can be for years to come. This allows for projects like the current $26 million undergrounding of residential utility poles and distribution lines to further enhance the city’s stunning mountain views. The Rancho Mirage lifestyle means residents enjoy miles of wide, sculpted sidewalks perfect for walking, running, and biking. Even driving on Rancho Mirage’s wide, tree-lined streets with their lush, landscaped median islands is different. In Rancho Mirage, responsible government is shown by its commitment to maintain the high-quality lifestyle that residents value so greatly.

“In 1976, Betty and I faced the decision as to where we would go after nearly 30 years in Washington,” says former President Gerald R. Ford. “We were blessed with many dear friends in a number of wonderful locations. The possible destinations included San Diego, Michigan, Northern California, and the Palm Springs area. Betty had a problem with arthritis and we decided that the dry desert air might be the best thing for her health. I cannot put into words how fortunate it was for the two of us to make our home in Rancho Mirage, a community of compassionate and generous individuals. We were immediately embraced by people who would become very close friends. And when Betty, along with Len Firestone, started the Betty Ford Center project, we observed the levels of caring, concern, and giving reach new heights. The numerous programs supported by the City of Rancho Mirage have benefited many, and in turn the residents continue to sustain those efforts, which are indicative of the generosity of this unique community.”

Enjoyable community events are also part of the Rancho Mirage lifestyle. The city donates part of its annual Art Affaire proceeds to help local nonprofits. Proceeds from 2005 were awarded to the Family YMCA of the Desert Arts and Humanities Program and the Desert Academy of the Arts Foundation. The Art Affaire, held at Whitewater Park, is free to the public and showcases high-quality art, drawing talented artists from all over the country. Both days of the festival features musical entertainment by jazz performers and cuisine from some of the area’s finest restaurants. This year, it’s on Nov. 4 and 5. It’s an affair not to be missed.

Rancho Mirage’s tradition of giving reaches beyond city limits. This year, when Cathedral City was short on funds for its new soccer park, Rancho Mirage pledged $10,000 toward the construction to help out.

The McCallum Theatre also benefits from a partnership with Rancho Mirage. In 2003, the city committed $50,000 annually for five years to the McCallum. Rancho Mirage sponsors two events each year, with special pricing offered for Rancho Mirage residents. The 2007 season features the Golden Dragon Acrobats of China on Feb. 25 and the popular Rancho Mirage Family Circus show on May 20.

“Our contribution to the McCallum Theatre was initiated in an effort to make affordable, quality entertainment available to our residents for those who might not be able to attend,” says Mayor Kite.

In 2001, Rancho Mirage funded $1 million for the student center at the new California State University, San Bernardino, Palm Desert Campus. Another $1 million was recently added to that for additional expansion. The city sees the new campus benefiting the entire community. Young residents can now complete their education here and enter the local work force.

“One of the most important decisions that our Council makes each year is the allocation of funds for civic improvements, as well as supporting those organizations that serve our residents so well,” says Mayor Kite. There’s no doubt that Rancho Mirage’s generosity helps make the Coachella Valley a better place for everyone.