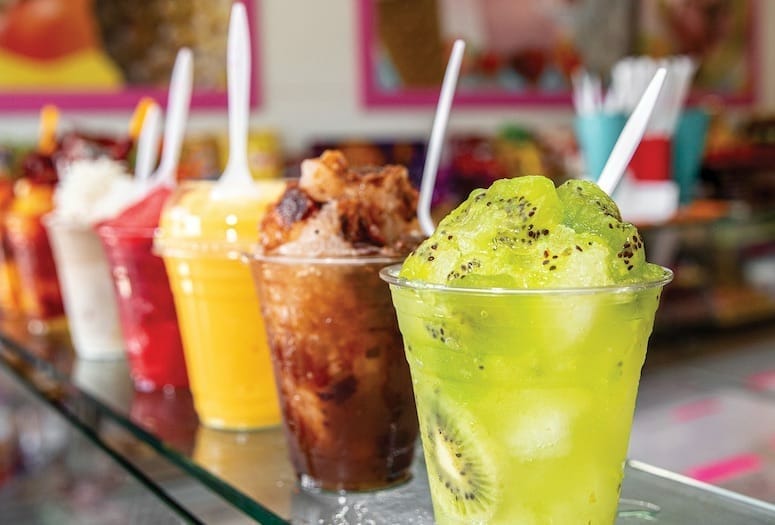 When temperatures soar in the Coachella Valley, Indio resident Misael Torres drops by his favorite local raspaderia, Raspados Esmeralda, for a chocolate shaved ice. For Torres, the treat does more than counter the desert’s July heat — it’s a way for him to recall his childhood. “When I was little, I’d only have, like, 5 pesos,” Torres recalls. “And I’d run and get a raspado.”

Many folks who grew up immersed in Mexican culture share the memory of spending summers sticky with raspado syrup. Mexico’s take on the snow cone gets its name from the Spanish word raspar, meaning “to scrape,” referring to the early method of hand-scraping ice. In the Coachella Valley, children enjoy the delicacies from family-owned shops, which each serve their own variations on the refreshing snack.

Michelle Valencia, who owns Azucena’s Raspados y Ice Cream with her husband, started out selling her now locally famous raspados from a cart at swap meets in 1998. “The customers started asking, ‘Why don’t you open a place?’ ” she recalls. “They wanted a store they could go to every day.” 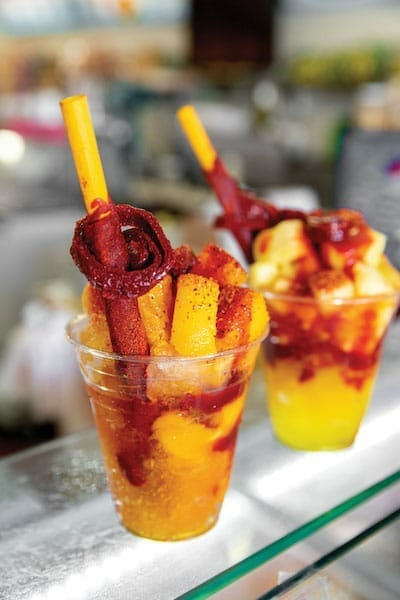 The mangonada is a popular choice at Azucena’s in Cathedral City.

The Valencias settled into their Cathedral City brick-and-mortar in 2000, naming it Azucena’s after their daughter. More than two decades later, they still make raspados the classic way: Their old-fashioned machine shaves large blocks of ice into powdery snow for the fluffiest treats possible. They top the flurry in the syrup of your choice — but if your brain conjures up images of the cloying, bubblegum-flavored syrup of fair day snow cones, think again. Authentic raspaderias cook down fresh fruit, sugar, and water to make their all-natural, lightly sweet sauces. When brewing richer flavors like vanilla (a favorite among Azucena’s regulars), shop owners typically swap water for milk.

The syrups come in dozens of flavors. If you’re familiar only with stateside snow cone shops, you’ll find fresher versions of standbys like pineapple and coconut, as well as flavors that may seem unexpected on shaved ice, like pistachio or caramel, and others that are common in Mexico but rarer in the United States, such as tangy tamarind or the plumlike ciruela fruit.

Every sauce is worth sampling, but some flavors reign supreme. Walk into almost any raspado shop in the desert and ask what’s good, and the response will be: mangonada. Raspaderias drench shaved ice in homemade mango syrup, then load it with chamoy (a sour fruit sauce), Tajín (chili lime salt), chunks of fresh mango, and Mexican candy, most commonly tamarind straws. The result is an addictive concoction that strikes a perfect balance between sweet, salty, and spicy. 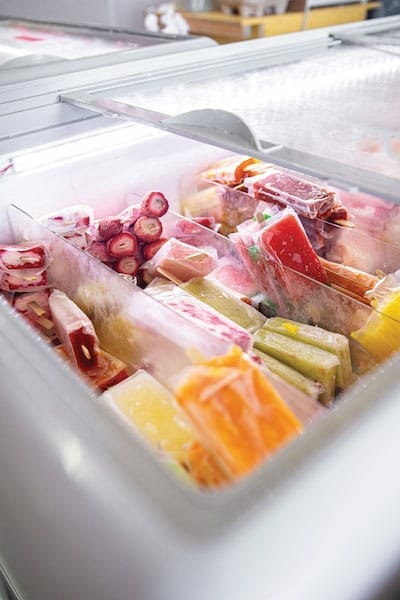 The refreshing snacks come as shaved ice and paletas(ice pops). 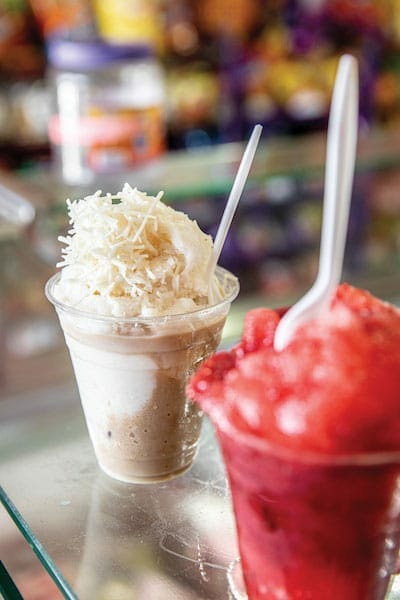 While chamoy and Tajín are most frequently paired with mango, the zesty condiments bring depth to almost any fruit, especially less-sweet options like watermelon or cucumber.

Mangos! Juice Bar & Raspados, with locations in Coachella and Cathedral City, allows patrons to dress up their own dessert at topping bars stocked with the classic chamoy-and-Tajín duo plus lemon juice, salt, and a few spicier sauces that might be better saved for the bags of chips on offer in the shop. If you’re feeling really adventurous, you can top your ice with Mexican candies (sold separately). 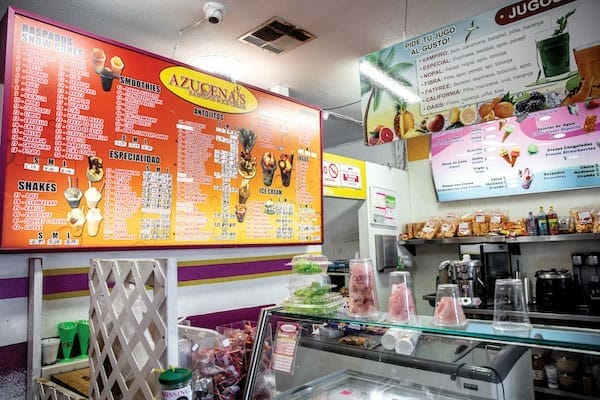 The Valencia family has been making raspados the classic way for more than 20 years at their shop, Azucena’s, in Cathedral City.
For a creative combo without the burden of choice, go to Raspados Esmeralda in Indio. Reyna Esmeralda founded her eponymous raspado shop in Arizona and relocated to Indio two years ago. “We use my brother’s special recipes,” Esmeralda explains in Spanish. “You can’t get these raspados anywhere else in the world.” Esmeralda’s staff makes their version even more singular with off-menu blends of 25 syrup flavors.

You’ll need to know at least a little Spanish to request a surprise mix, so if you’ve skipped your Duolingo lately, we recommend bringing a bilingual friend (or asking fellow customers for an assist).

Staff might douse the ice in arroz con leche, or rice cooked in milk, cinnamon, and sugar, then add a tart mix of blueberries, raspberries, and blackberries. Kids will dig a blend of strawberry, pecan, and coconut syrups, finished with a hit of lechera, or sweetened condensed milk, for an extra sugar rush. Half the fun is watching staff carefully ladle out each sauce from plastic bins and fold them into the ice for the perfect cup of slush.

The other half, of course, is digging in.

• READ NEXT: Tastes of Summer: Desert Dining Ensures You Experience All of Them.