“There’s something about this place …”

This phrase echoes from canyon to canyon throughout the desert, generation after generation — a thought that remains unresolved to this day. It refers to a certain something here that is ineffable, intangible, but alive. The whisper of the desert shakes artists and innovators to their core and even empowers them to change the world.

This should hardly come as a surprise. The Cahuilla people, who have traversed this landscape for thousands of years, were themselves industrious and inventive. They cultivated the salubrious hot springs and made tortillas out of mesquite beans. They discerned the elements of their environment, filtered them through an innate lens of industry and enterprise, and the ordinary became extraordinary.

It is a formula that transcends generations and is in the desert’s DNA. In the Coachella Valley, imagination and ambition drive invention and industry.

All whose success was inspired or buoyed by this place could fill a book. Here, we spotlight several individuals who found themselves and their métier in the desert. We ask them, their descendants, and those with knowledge what it is about this environment that dared them to dream and create work that continues to speak into our lives today.

Albert Frey, who first came to Palm Springs in the 1930s and returned for good in the ’40s, took his cues from nature, according to author and architecture historian Peter Moruzzi. “That certain something to him was the open desert,” he says. “It spoke to him. It is reflected in his work, which uses a good deal of glass for an indoor-outdoor feel.” The Swiss architect, who had previously worked for Le Corbusier, was inspired by the desert’s critters, small and large. “The flowers, too. He knew them all by name.” The tipping point? “The people here. He found them open, which allowed him the freedom to experiment.” Among those experimental accomplishments are Frey House I and II, Palm Springs City Hall, and the Palm Springs Aerial Tramway Valley Station. 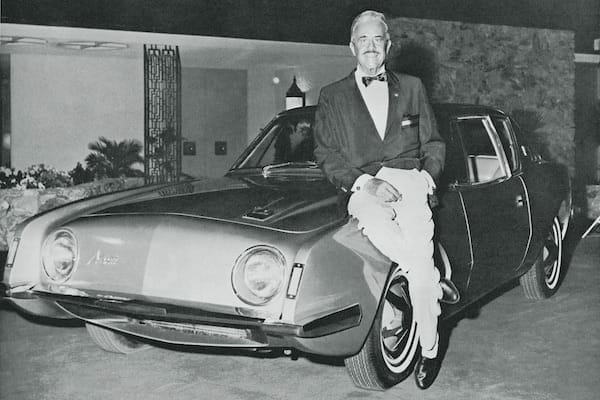 Raymond Loewy with the Studebaker Avanti.

The Studebaker Avanti, a luxury sport coupe manufactured from 1962 to ’63, was said to be a “love letter to forever” by designer Raymond Loewy — a car that has been described as “timeless” and “unforgettable.” Loewy designed it with his team at a rented bungalow near Loewy’s own Albert Frey–designed home in Palm Springs.

Not limited to cars, the polymath’s talent extended from the everyday (iconic logotypes for Nabisco, Greyhound, and Shell) to the otherworldly (a NASA space station), according to Modernism Week co-founder Jacques Caussin. “Loewy bought a villa in St. Tropez [France] and was drawn to Palm Springs by the sunny climate. Also, its inhabitants.” Loewy, a skilled opportunist in society and business, enjoyed living close to the city’s movers and shakers. (Loewy resided next door to department store magnate Edgar Kaufmann, to whom he pitched business ideas.) Personality and place came together in ’62 with President John F. Kennedy’s visit to Palm Springs. “Loewy was struck by the scope of Air Force One,” Caussin says. “Loewy maneuvered his way to a Kennedy aide and wound up going to Washington with a presentation to redesign the plane’s interior, which he did. Jackie [Kennedy] was so delighted that, a year later, she asked him to design the JFK commemorative postage stamp.” 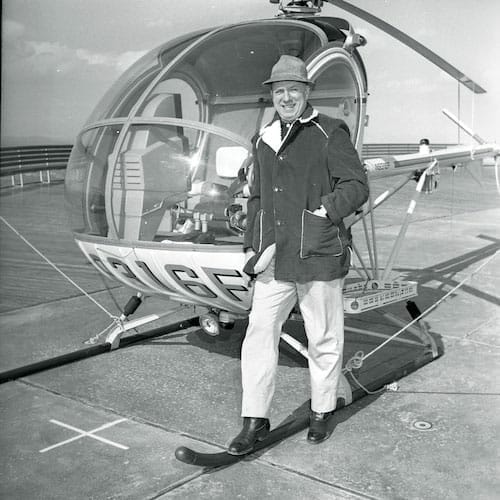 Jimmy Van Heusen was known to helicopter to his Yucca Valley oasis.

Frank Sinatra, Dean Martin, Liberace, and other music legends (Elvis!) had homes here, but most were for R&R. Composer Jimmy Van Heusen, on the other hand, found his oasis on a Yucca Valley mountaintop, where he helicoptered in to breathe the clean air and ease his sinus issues. He harmonized with the natural beauty — cactuses, mountains, and open skies — and frequently gallivanted hillsides with his beloved Tennessee walking horse. “I’m a different animal here,” Van Heusen once said, adding that each time he left his desert property, he couldn’t wait to “get back to the good life,” which included writing showstopping music. He worked with lyricist Sammy Cahn, a desert resident and legend in his own right. Among the duo’s accomplishments was “Love Is a Bore,” partially composed at the Yucca Valley residence. 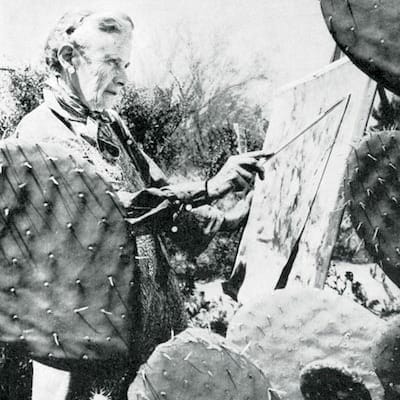 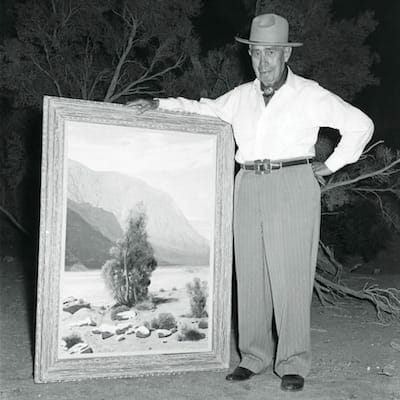 The land and light of the desert propelled the creativity of artists Agnes Pelton (above, left) and James Swinnerton (above right).

Agnes Pelton, German by birth, moved to the United States as a child and eventually traveled the world painting “imaginative paintings.” A visit to Santa Fe, New Mexico, changed her direction, as the desert became her source of inspiration. In 1932, Pelton moved to Cathedral City, where the confluence of the spiritual and the natural landscapes captured her soul and influenced her most groundbreaking work. She wrote, “The vibration of this light, the spaciousness of these skies enthralled me. I knew there was a spirit in nature as in everything else, but here in the desert it was an especially bright spirit.” Pelton lived here for almost 30 years, painting desert landscapes as well as her better-known transcendentalist canvases.

James Swinnerton, a newspaper cartoonist whose “Little Jimmy” and “Canyon Kiddies” strips thrust him into the cultural zeitgeist near the turn of the 20th century, came to Palm Springs around 1903 when his tuberculosis became life-threatening. At the time, the village was nothing more than “14 white people and 24 Indians,” he said in an interview many years later. He, like others of the time, dwelled in a tent house. Nevertheless, the valley’s clean air and abundant sunshine improved his health, and he fell in love with the area’s land and light. He began painting exquisite oils of desert vistas. Landscapes became his new calling card, and his heart found its home. There were plenty of dissenters, Swinnerton said, “but they soon followed with their canvases and easels.” The real purpose of the paintings, he noted, was to call attention to the beauty in nature, where “there is no end to the beauty of sand, rocks, and sagebrush.”

Hollywood had a firm grip on TV and film writer Rick Copp (The Golden Girls, The Brady Bunch Movie), but Palm Springs captured his heart. “After five years of going back and forth, I moved,” he says. “There is such a great social network here, and I love the scenery, the places I see, where I dine.” He even incorporates them into his work. His Palm Springs–set Desert Flowers cozy mystery series (penned as Lee Hollis) routinely features real-life places. In an upcoming installment, his retired actress-turned-detective protagonist, Poppy Harmon, discusses a case over Sunday brunch at Spencer’s Restaurant. Copp has enticed friends and co-workers to come and stay. “Like me, they find that there’s a great opportunity to be creative here; the social life is inspiring; and above all, an audience will show up, come out, and support you when you do something.”

Sidney Sheldon’s creative genius continues to resonate. He not only created memorable TV (I Dream of Jeannie) but also wrote sizzling bestsellers (The Other Side of Midnight) and co-wrote classic films (Easter Parade). Novelist daughter Mary recalls the family’s life in Palm Springs and residence on Rose Avenue as being filled with “a glorious sense of optimism. We loved the stillness — we’d go out and sit on a blanket to watch the stars — and the traditions [Mexican food and bookstores on Saturday night], the certainty it provided in an uncertain world.” The Sheldon family was drawn also to the desert’s relaxed pace, history, and uncrowded streets — all of which provided fertile creative ground. “Papa worked on Windmills of the Gods there, and I remember plotting out Resolutions sitting by the pool. It’s 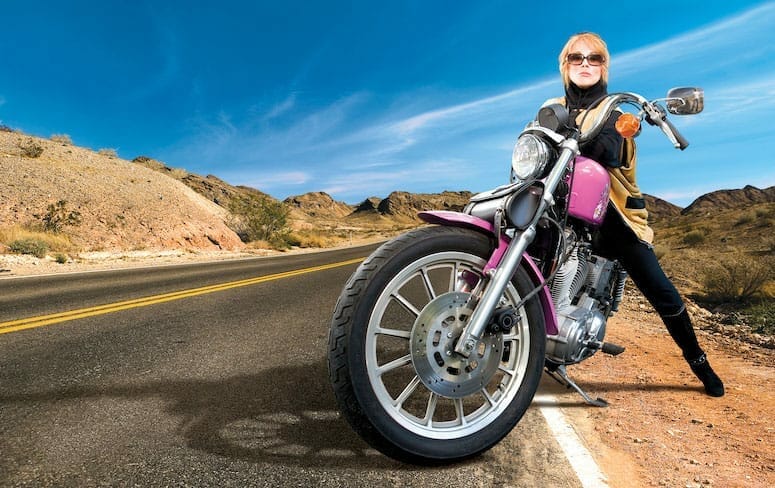 Celebrity photographer Michael Childers and many of his famous images are well-known to people around the desert, but the beauty that lured him here may be less obvious. “It’s the extraordinary light and the red earth,” he says of the desert’s finest features. “Everything is like a painting — and everything is constantly changing.” Childers felt the connection and began photographing landscapes. “I see these rocks in Joshua Tree that are 10 stories tall and am filled with wonder. I find a liberation of the spirit here and am able to let go and let fly.”

As creative people continue to set upon the desert to dream, invent, and reimagine, only time will tell its impact on society and culture. What we do know is that “certain something” is still alive. It beckons from the mountains and canyons, glows in the sunlight, and whispers through the palm trees. And because of that, history is destined to repeat.