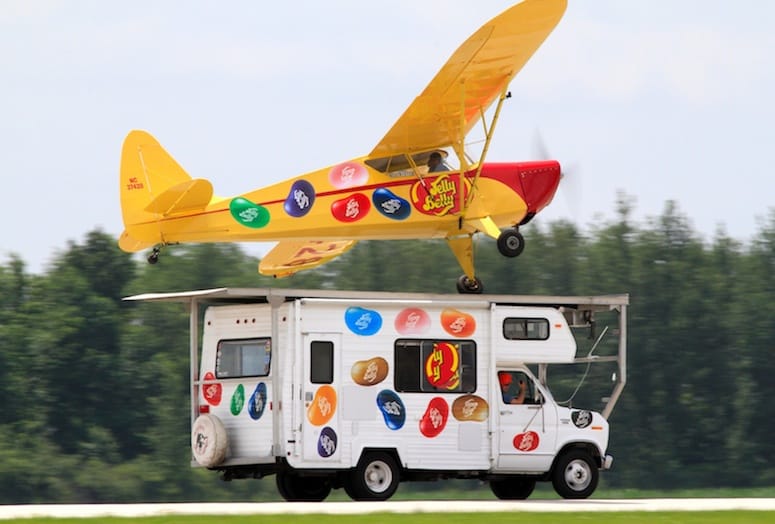 Kent Pietsch and his Jelly Belly Plane making an amazing landing on a moving RV.

Attendees will be treated to a wide-variety of vintage aircraft, high-flying aerobatics, live entertainment, food and beverage vendors and a kids’ zone. In addition to the air show, spectators can purchase entry into the Wine & Brew Fest to sample some of Inland Southern California’s premier wine and craft brews. Attendees will be able to taste the delights of gourmet food trucks and rock-out to live music, all while experiencing a taste of Temecula Valley region of Riverside County. Admission, parking and the kids’ zone are free to the public. Riverside County is not a stranger to air shows, holding one per year at either the Jacqueline Cochran Airport in Thermal or the Hemet-Ryan Airport in Hemet, since 2005. This will be the first air show held at Riverside County’s French Valley Airport.

Live performers at the event will include aerobatic stunt pilot Kent Pietsch and his Jelly Belly Plane, performing a thrilling routine from 6,000 feet and attempting a rooftop landing on a moving recreation vehicle. Bill Braack and his Smoke-n-Thunder Jet Car will roar with excitement as 20-foot flames and billowing smoke exit the race car when he pulls over 4 G’s and 400 MPH to try and overtake a racing plane above. Bill Braack in his Jet Car races in the Smoke-N-Thunder Jet Show.

The French Valley Air Show is organized and managed by the County of Riverside and presented by Upper Limit Aviation.