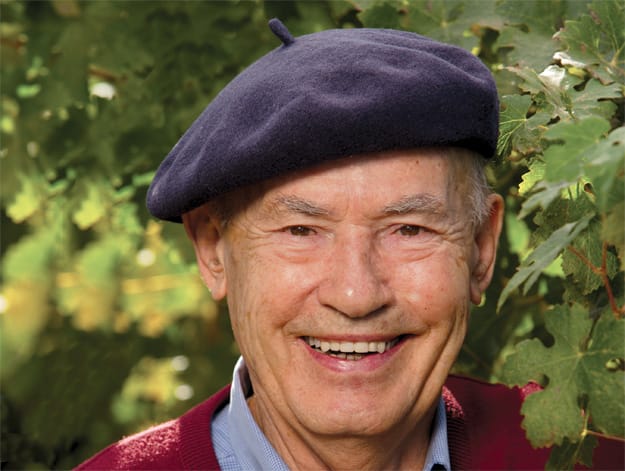 Although he’s spending the day at home in La Quinta, Miljenko “Mike” Grgich sports his trademark beret, a houndstooth jacket, and a tie whose abstract pattern suggests grapes. At the age of 85, the world-renowned winemaker recalls how he first came to own a beret in his native Croatia in 1949.

“When I went to University of Zagreb, I had no father, no mother. I had to support myself, and I came to Zagreb, which has lots of rain, like Seattle. So I bought an umbrella. I lived seven miles from university and going to the university and back I had only one choice, and that was streetcar,” he says. “One day, I left the umbrella on the streetcar. … I was walking down the street one day and I saw the French beret. I had no money to buy a new umbrella, but I had enough to buy a beret. I thought that will be to protect my head and I am never going to lose it because I could fold it up and keep it in my pocket. And since that moment on, this was my head.”

From such humble beginnings, Grgich climbed to the pinnacle of success in the world of wine. Last year, he celebrated his 50th harvest in Napa Valley and was inducted into the Vintners Hall of Fame. The cardboard suitcase filled with books that he carried when he emigrated from Croatia is displayed at the Smithsonian Institution, which acknowledges him as the winemaker who produced the 1973 Chateau Montelena chardonnay that won the seminal Paris tasting in 1976 that put California on the wine world’s map. Though Congress passed a resolution in 2006 recognizing Grgich’s role in the Paris tasting, that role was omitted from the 2008 film Bottle Shock after he turned down $10,000 to sign off on the script because of inaccuracies in the story.

Grgich’s own story starts much longer ago as the youngest of 11 children born to a Croatian winemaker. From the ages of 6 to 10, he tended a flock of 20 sheep, taking them up the mountain in the morning and bringing them down after he returned from school. “I have discovered a great belonging to the soil, to the trees, to the sheep,” he says. “I came to America with a lot of instinct, and civilization is getting away from instinct. Computers are replacing instinct, and I can claim definitely that part of my success was possessing this instinct.”

After studying enology and viticulture in Zagreb and while working at a paper mill on a Canadian visa in 1956, Grgich placed a position-wanted ad in a wine bulletin and landed a job at Souverain Cellars in Napa. From there, he went to Beaulieu Vineyard, Robert Mondavi Winery, and Chateau Montelena. After the Paris tasting, Austin Hills of the Hills Bros. Coffee family approached him about creating a winery on vineyards Hills owned in Rutherford. The first vintages of Grgich Hills in the late 1970s were served at dinners attended by Spanish King Juan Carlos, President Ronald Reagan, French President Francois Mitterrand, and Queen Elizabeth II.

Rightfully proud of his accomplishments and awards (which include the Roots of Peace 2007 Global Citizen Award for his efforts in landmine awareness), Grgich seems most pleased with his contribution to winemaking in his homeland.

“After fall of communism, I came back to Croatia and brought the Napa Valley knowledge about red wines,” he says of a trip he made in 1993 when Croatian vintners were still aging wine in cement tanks. “My hope was to go to Croatia not to open a winery, but rather to give my country as present the knowledge they needed to have better wines than made during communism.”

Grgich, however, did open a winery in Croatia after purchasing and restoring a former fortress on the Adriatic dating back to 1947. The same year the Smithsonian commemorated his role in American wine history (1996), Grgich opened Grgic Vina (he added an “h” to his name in the United States to help Americans pronounce it correctly). The winery, on the steep hillsides of Trstenik, produces plavac mali, as well as a white wine called posip. And this is where Grgich’s story circles back to his arrival in Napa. Grgic Vina’s vineyards in the Dingac appellation face the .

“When I came to Napa Valley, first day I saw zinfandel,” he says. “I looked at the leaves and the clusters and the color of the grapes. I was puzzled in a moment whether I am in America or whether I am in Croatia, because we have such a wine in Croatia that is not different physiologically.”

It was not until 1998, however, that Grgich pursued confirmation that the grapes in the two countries were iden-tical. He convinced Carole Meredith, a University of California, Davis, pro-fessor, to embark upon a study of the origins of zinfandel. In 2001, after DNA analyses of hundreds of samples, Meredith and a Croatian researcher at the University of Zagreb determined that zinfandel, primitivo (grown primarily in Italy), and Croatia’s ancient crljenak kastelanski share the same genetic structure. Plavac mali is the offspring of crljenak and dobricic, another Croatian varietal.

Although crljenak has all but disappeared (one reason Meredith’s research took so long), Grgic Vina grows 17 vines courtesy of the University of Zagreb. “We have one barrel, 2008 vintage,” Grgich says. “Maybe we will bottle it in 15 months.”

Meanwhile, Grgich extols the virtues of plavac mali, which he says possesses more color and more resistance to rain than zinfandel and “maybe some day will replace zinfandel in America.”

Grgich leaves the task of introducing plavac mali to the states to another generation.

“I am on the end of my life, and that’s why I came here to paradise — to enjoy my life, not to work so hard,” he says. Later, he employs the metaphor of climbing to his lifetime of achievements.

“I used to climb mountains in Croatia, and I climbed St. Helena [in Napa County] 50 years. There’s something that pulls me up, and I try to make another 50 years here in La Quinta. Who knows?”

HEARD THROUGH THE GRAPEVINE

Zinfandel talks to Mike Grgich.
“When it goes through the throat, it says, ‘Mooore,’” the famed winemaker says.

At the same time, he thinks it’s going to be replaced by a wine made in Croatia: plavac mali (“little blue,” referring to the small size and bluish cast of the grape) — the “child” of crljenak and dobricic, the former having the same DNA as zinfandel. According to Grgich, seven different wines have crljenak genes and there are several plavac varietals, but with larger berries than plavac mali.

“Plavac mali is much more fruity and more elegant [than zinfandel],” Grgich says. “It has advantage over crljenak and zinfandel by having more color and heavier skins [making it more resistant to rain].” While California winemakers, including Grgich, sometimes add petite sirah to zinfandel for color, Croatian winemakers produce 100 percent plavac mali. The best is grown in the Dingac appellation of Dalmatia, Grgich says. His own Dingac vineyards lie on a slope with a 50 percent grade, facing the Adriatic Sea.

After opening in 1996, Grgic Vina exported wine to 20 U.S. states. Then, as tourism increased in Croatia, so did local wine sales. “For the last five years, we have not enough wine to export into the U.S., though many people ask [for it],” Grgich says. Not only do government bureaucracy and transportation costs make exporting the wine less attractive, but also he can charge a higher price (about $35) in Croatia because of increased tourism and fewer grapes/less competition.

“Over there, we sell our vintage in six months,” Grgich says. (Grgic Vina annually produces 1,500 cases of red plavac mali and 1,500 cases of white posip.)

While there are about 82,200 acres of grapes in Croatia, “They are planting now because if they get into the EU, they will be limited,” Grgich says. “Now there is a big rush; [vineyards] are popping up everywhere.”