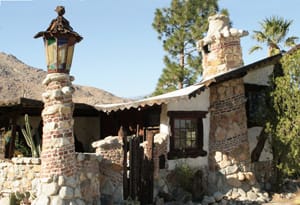 The first time I saw the gingerbread house, I was coming around a bend in Snow Creek when I spotted a shingled wing that looked like it was going to take flight over Mt. San Jacinto. Another few yards and a lighthouse turret came into view. By the time I was alongside the cottage, I was smiling as if I’d just watched a Stuart Little movie marathon. The good feeling stayed with me most of the day.

I’d stumbled onto the desert’s prime example of storybook architecture. Also called fantasy revival and Hansel-and-Gretel style, the look flourished in Los Angeles in the 1920s and ’30s, inspired by the rise of the movie industry and a citywide burst of creativity. One of the best-known storybook builders, Lawrence Joseph, worked as an artist at Disney Studios and brought Disney-style whimsy to his home designs.

To understand storybook style, you just have to go down the checklist of midcentury modern features and picture the opposite. Instead of sleek, think bumpy. Instead of simple, impractical and cluttered. Flat roof? On the contrary, look for giant swoops and lopsided curves. Sophisticated? Hardly. Storybook is the favored home design of court jesters and children.

The Snow Creek house is not well known because the hamlet itself is secluded. It’s a tiny village camouflaged by olive trees, up against the mountain to your right as you’re driving into Palm Springs on Highway 111.

Soon after my discovery of the house, I met a desert tortoise researcher, Curtis, who lived in the cottage as a renter. The home’s magic infused Curtis and his wife; they couldn’t believe their luck to be sleeping in the loft, peering through stained-glass portholes and dining at a bar crafted to look like a whale’s tail. The home, they told me, was built by John Van Pelt, who lived there with his wife, Myra. Construction began in 1951, the year inscribed with handprints on the septic tank lid. Rumor has it Van Pelt built three more hobbit houses around the Southland.

The exterior is a hodgepodge of rough stucco, bricks, stone, and driftwood, all at careening angles. Inside, everything is dark polished wood, lopsided and listing. It’s as if you’re adrift on a ship in the stormy desert.

Van Pelt left behind this desert landmark, but not much else. While there is a book, Storybook Style, and a Web site (www.storybookers.com) devoted to the artisans of L.A. storybook style, experts on the genre have never heard of Van Pelt and his desert house. All we know about him comes from a 1956 article in the Riverside Press-Enterprise.

The son of a Methodist minister, Van Pelt was a teacher and arranger of sacred choral music. He built his house using local materials — logs from Black Mountain, rocks from the desert — as well as stained glass salvaged from condemned churches and from an old vaudeville house in Los Angeles.

The house is run-down. Even in its prime, it was on the funky end of the storybook spectrum. As seen from examples on the storybookers Web site, the genre included some elegant L.A. homes. One of the best known — the Spadena House in Beverly Hills — was built by Harry Oliver, a former Hollywood art director who later in life became a beloved folklorist in Thousand Palms. (Incidentally, the Harry Oliver Trail here is the road leading to Sunline Transit Agency.)

For now, the Snow Creek house is probably the only example of the genre in the desert. But there could be new contenders. Since the 2001 publication of Storybook Style, the look has enjoyed a comeback.

Still, storybook style can never be mass-produced like ranch houses, bungalows, or midcentury moderns. A storybook home is always the product of one dreamer’s vision — as this inscription on the Van Pelt house attests:

This house built by
John Van Pelt
With Love-Spirit-Rock
And Much Geld.

If you drive by the Van Pelt house, please respect the tenant’s privacy.