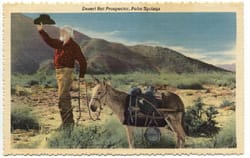 Our hero’s character was partly shaped by his burro — at one maddening and dear.
Palm Springs Life Archives

If you study desert literature, a pattern emerges: An artistic loner (almost always a man) seeks the desert’s wealth in the form of gold, sunsets, or philosophy. He may be lonely, but he’s never really alone because he’s always cooing or cussing at his sidekick, a burro.

Cabot Yerxa, the pueblo builder of Desert Hot Springs, toted water for his adobe bricks on his burro, Merry Christmas. Writer J. Smeaton Chase survived a Chino Canyon flash flood alongside his burro, Mesquit. Frank Coffee, the prospector and so-called Mayor of Dos Palmas (near the Salton Sea) scandalized visitors by referring to his burro as Mrs. Coffee. And Gus Lederer, Coffee’s counterpart in Corn Springs, baked each of his 18 burros a donkey-sized pancake each morning.

In each case, our hero’s character was shaped not just by the hardships of the desert, but also by his relationship to this consternating creature. The burro is like nature herself — maddening and dear at the same time. “Instead of doing what you say, a burro will stop and analyze the situation,” says modern-day burro-keeper Bonnie Lynk of Cabazon.

Today the burro has mostly passed out of our lives and legends. That’s a shame, because this pack animal did more to settle the Coachella Valley than the scores of Realtors and developers who came later. As a prospector says in Zane Grey’s Wanderer of the Wasteland, a novel set partly in the

Coachella Valley, “This desert would still be a blank waste, unknown to the white man, if it had not been for those shaggy, lazy, lop-eared little donkeys.” (Vocabulary note: “Burro” and “donkey” refer to the same animal. A mule is a cross between a burro and a horse.)

The burro was a doglike companion; he could also tote water and bedrolls across the toughest terrain. Brian Edwards of Desert Hot Springs often heard stories about the heroic burro, California, that his dad rode as a kid. California once forded the flood-stage Whitewater River with a terrified 9-year-old Osborne Edwards clinging to her back and again saved the lad’s life by sheltering him with her body in a sandstorm.

“Burros can’t be beat if you’re on foot and need to carry stuff,” says Sky Valley horseshoer Craig Allen. “Other than that, they’re not that useful anymore.”

Neither are explorers or prospectors, of course. But back in the day, the one-blanket-and-a-burro prospector was equal parts cowboy, Rocky Mountain trapper, and mountain man — a fearless pathfinder who opened new frontiers. And his long-eared sidekick was the equivalent of the noble mustang.

The greatest literary champion of the burro-human partnership was our own Edmund Jaeger, famed desert naturalist and one of Palm Springs’ early schoolteachers. In 1915, he rode his burro — variously called Nellie and Nettie — back and forth to work. “To the burro I owe many of the happiest and most scientifically fruitful days of my life,” Jaeger wrote. “Señor Burro, I salute you as a good neighbor and faithful friend.”

Right up there with Jaeger in his affection for the burro were Edna and Bill Price. Bill was a longtime fire chief in Idyllwild. If you want to read a burro classic, track down a copy of “Burro Bill and Me,” Edna’s account of the late couple’s prospecting days in Death Valley. The two grew up in an era when burro travel was all but dead — killed by the automobile. But, charmed by the mythos, they took up burro travel, learning the art from the surviving burromen.

Even in a sandstorm or facing death by dehydration, the burromen tended to their burros before seeing to their own hunger and thirst. The Prices eventually adopted the motto of all real burromen and women everywhere: “Burros first, last, and always.”