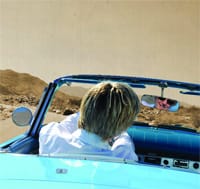 If were introducing a column on personalized ringtones or celebrity baby fashions, I’d need no justification. But you can’t just lay history on a sophisticated audience and expect them to bite; it calls for explanation.

When some of you see the grainy old pictures accompanying this column, you will turn the page and look for something new and shiny. After all, this is the home of sleek modernism.

So I want to assure you I like shiny, too. In fact, I don’t even relate to the word “history.”

I’m a baby boomer, influenced by the currents of the ’60s and a Los Angeles childhood where there was no past  — except for those dreary mammoths poking their tusks out of the muck at the La Brea Tar Pits.

Then, as a young adult, I became a newspaper reporter, moored solidly in current events. Writing features for the Los Angeles Times, I traveled around the West looking for what was new: wacky polygamists in Utah, religious cults in Montana. I took calls from movie people who also were scouting for fresh stories and competed with other reporters lured by the scent of novelty.

Entirely by accident, some of these stories took me into the past. I interviewed the fourth husband of Pancho Barnes, late aviatrix and former proprietress of the Happy Bottom Riding Club at Edwards Air Force Base. She reigned in The Right Stuff era, and learning about her took me into the early days of the test pilots.

Later, I interviewed Donner Party descendants — folks still squabbling over whose relatives ate whom on the snowy pass back in 1846.

Some might say that by getting caught up in these stories I was regressing. But to me it felt like progress.
Time enhances every plot. We’re all impermanent. Our lives are moving through time, and stories with links to the recent past (I’m not talking about the Dark Ages) have an added emotion that reminds us of our personal plots.

My baptism was complete when I moved to Palm Springs 11 years ago.

I was captivated by the canyons, peaks, and valleys I could see from my back yard, as well as the enticing names on the map — Morongo, Mecca, Pinyon, Whitewater.

I found that each of these places has its own stories. This valley is unusually rich with lore, and each of those events is attached firmly to a place. You can go to Chino Canyon — home of the great Cahuilla shaman Pedro Chino — and you can also talk to a fellow (Alvino Siva) who knew Pedro Chino and had a black widow spider bite cured by the old shaman. To me that brings the past full circle and sets the present right.We think of modern stories as having legs because they are still unfolding.

I’m here to say the old stories are unfolding in ways just as dramatic. Recently researching the saga of the 1909 Willie Boy manhunt, I found there are still roiling controversies (did Willie Boy escape the posse?) and plot entanglements (was Willie a cad or a freedom fighter?).

The past is unsettled. You can breathe oxygen into these stories and they leap to life, full of conflict and sparks. The point of this column is not to capture dates and facts for posterity. It’s true that I talk to a lot of older people, and it means a lot to me to hear what they have to say while they’re here to say it. But I’m not building an archive; I’m indulging in an interest.

So try not to think of it as history, but rather wabi sabi — the soulful, fragile texture of home.
— Ann Japenga