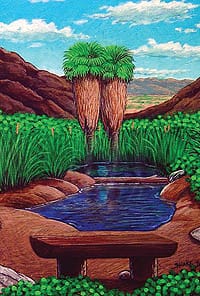 Some people may consider Las Palmas or the Movie Colony the best Palm Springs neighborhoods, but my idea of a classy address would be The Vines. That’s the dense jungle of grapevines and creosote to your left as you near the top of Tramway Road in Chino Canyon.

On cool nights, you used to be able to see steam rising from The Vines. A pair of hot springs attracted luminaries to the spot throughout the decades. The earliest residents were the Cahuilla Indians, who survived an epidemic of black measles in a cave hospital in the canyon and were later chased out by an 1887 flood that rolled boulders high up the canyon walls.

Lots of VIPs have lived here, but the biggest celebrity of all was Pedro Chino, a Cahuilla shaman who was born in the canyon and gave the place its name. I think of Chino as our local Dalai Lama, a man full of wisdom and healing magic. Even his dogs had power.

It is said that Chino was an expert wild horse rider and a hunter who could turn into a mountain lion to stalk prey; that he talked to spirits, such as the White Deer, who lived in the hot springs; and that he traveled on secret waterways beneath Mount San Jacinto. (Later, workers digging a tunnel for the Colorado River aqueduct found there was indeed a waterway under the mountain.)

Cahuilla elder Alvino Siva was just a boy when he got to know Chino by taking care of his turkeys. He learned many useful things from the medicine man, such as how to cure a leg ulcer with a poultice of six lizards. The disadvantage to being a healer, Chino once told Siva, was that he knew when people’s spirits were about to leave them. “His dog could see it and would let him know,” Siva says.

Following Chino’s residency, some of the region’s best-known authors lived at The Vines. J. Smeaton Chase pitched a tent by the hot springs. George Wharton James lived in a hut beneath three palm trees. The springs, he wrote, were far more rejuvenating than Cleopatra’s finest camel’s milk bath: “The whole being seems exhilarated; you want to run and shout and work.”

Prescott Stevens bought the land surrounding The Vines from the Southern Pacific Railroad in the early 1900s. In the 1930s, Stevens’ son, Culver Nichols, was hiking around the area when he rediscovered the grown-over hot springs. Culver’s son, Steve Nichols, used to go up there with his dad. “The place was a joy for him. He always wanted to have a house up there,” says Nichols, president of Whitewater Mutual Water Co. The Nichols family eventually sold much of its land in the canyon, but still owns The Vines, which today is fenced, guarded, and off-limits to hikers.

But before the fences came the hippies. They discovered the Eden-like spot in the 1960s, and some of the bohemians — including Palm Springs artist Snake Jagger — were allowed to live there and take care of the land. They were vegetarians who ran a business called Zeus Juice in Cathedral City. Jagger remembers that The Vines looked like a hobbit colony, with tiny trailers connected by footpaths winding through the undergrowth. The residents luxuriated in the 110-degree hot springs and occasionally coated themselves in mud — grunting and gesticulating — to scare off rowdy intruders. Chino died in 1939, at age 126 allegedly the oldest living man in the country. Floods altered the topography of the canyon so that the hot springs steam no more. Chino Canyon is today the site of battles over development; and Palm Springs’ hottest neighborhood is a forgotten tangle of brush.

Yet Jagger says he’d go back to The Vines in a minute — if he could have Internet access. “It was the best time of my life.”