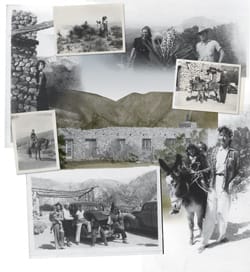 If you think about Whitewater Canyon at all, you probably think of the now-closed trout farm and not a utopian colony ruled by an Amazon roofer, model, house mover, and ambulance driver. I, too, was under the impression there wasn’t much in Whitewater but a roadside fishing attraction, until my friend Les Starks showed me another side of the place.

Whitewater River begins in the high meadows of Mt. San Gorgonio and flows into Whitewater Canyon west of Palm Springs. At one time, it was the last place for travelers to procure water and supplies before crossing the Colorado Desert. Bradshaw Stage drivers, Southern Pacific Railroad workers, gold seekers, and explorers (such as Jose Romero in 1823) all dipped their canteens in the Whitewater River.

In more recent decades, the canyon’s only claim to fame was that the former lead singer of The Animals, Eric Burdon, lived there. Now Burdon has moved away and the trout farm sold to the Friends of the Desert Mountains preservation group.

Changes are coming to this little community. Starks, who once lived in Whitewater, offered to drive me around to see what’s there before it’s gone. Off the main road, we found the magnificent ruins of a roadhouse that served workers for the Colorado River aqueduct project in the 1930s. The huge fireplace was studded with concretions, spherical masses of sedimentary rock. The remains of cabins, of similar fanciful construction, were scattered around the roadhouse.

Starks told me a family named Mackenzie has owned much of Whitewater Canyon, along with the cabins and ruins, since the 1930s. A former model from Costa Mesa, Kathryn Mackenzie came to Rancho Mackenzie in the 1940s when her brother was ill from tuberculosis. Indian friends advised her to treat him with poultices of the yerba mansa that grows in Whitewater. (Her brother died nonetheless.)

Mackenzie purchased cottages left over from the 1932 Olympics and had them moved from Catalina Island to Whitewater, then began moving in her countercultural women friends from the city. Among them were Maloo, a recovering alcoholic, and Esmeralda, who viewed auras. Sally wrote poems. Her son, Otis Bainbridge, posted them on the community dumpster.

Mackenzie held the community together. “People congregated around her all her life; she was pretty spectacular,” says her niece, Jan Mackenzie, who just moved out of Whitewater Canyon in September.
The ladies of the canyon were disciples of an Indian mystic, Sawan Singh. They took alternative cures and ate vegetarian foods. “They were so far ahead of the doctors, it’s hard to describe,” says Bainbridge, now a Palm Springs resident.

For exercise, they took long walks beneath the cottonwoods along the river, where the sand is white and the hillsides are painted with Palm Springs Gold — an orange, sparkly rock mined for commercial use.

Jean Farrar, companion to the late Palm Springs architect Albert Frey, lived in a trailer on Mackenzie property. She remembers Kathryn’s open-door policy toward strays and wildlife. In addition to feral dogs and cats, snakes and raccoons were frequent visitors. A coydog (half coyote, half dog) named Sandy adopted Farrar and became her faithful sidekick.

Kathryn Mackenzie graced the canyon for 50 years off and on, in between stints as an ambulance driver for Desert Hospital and other jobs. When she died in 1988, at the age of 90, the Mackenzie clan took over the rancho. Now they are talking to developers about selling off the place.

Everyone knows Palm Springs real estate is too pricey today to support utopian experiments. But my day in Whitewater with Starks reminded me that, not long ago, coydogs and bohemians flourished in canyons and crannies all over this valley.
— Ann Japenga