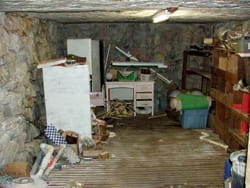 The 1950s were not all about feel-good architecture. There also was a mania for radiation. It was the era when hucksters sold radioactive toothbrushes, pillows, and even suppos-itories. The public believed radiation could cure anything. As an article in the American Journal of Clinical Medicine put it, “Radioactivity prevents insanity, rouses noble emotions, retards old age, and creates a splendid youthful joyous life.”

Everyone was looking for a way to make a buck on radiation, including two Idaho men who discovered a cave full of uranium in 1956 and decided to haul the glowing rock to Desert Hot Springs. This started what would become one of the desert’s best-kept historical secrets: possibly the only uranium health cave ever built in California.

To find out more, I telephoned cave-builder Darrel E. Gibson in Newdale, Idaho. The 86-year-old told me it had been his job to truck loads of yellow rock to the Coachella Valley from Montana and then from his brother-in-law’s uranium mine in Barstow. Gibson had never built a uranium cave, but says “I just did it out of my head.”

He used a rock hammer to break up the uranium. Then, before cementing the pieces in place on the cave walls, he tested each slab with a Geiger counter to make sure only the hottest stones would become part of the Golden Lantern Trailer Lodge and Uranium Cave. (Rumor has it the place was named after a donkey named Lantern who was buried out back.)

While Gibson was at it, he built six motel rooms; and soon health-seekers arrived to fill them. There were seats for 15 people in the cave; it cost $1 to irradiate for an hour. “It really did their arthritis good,” Gibson says.

I wanted to see the place but was sure there was nothing left. Obviously a radioactive hole in the ground would have been filled years ago. Gibson said the place had been out on Dillon Road, but he didn’t know what the resort might be called today.

I spent the next few days calling various establishments in Desert Hot Springs, asking, “Do you have a uranium cave?” One call was to the Casa Del Sol Mobile Home Park. Bingo. “It’s here right under the office,” the manager said. “We use it for storage.”

I was eager to drive over right away. But first I sent an e-mail to radiation safety expert Paul Frame at Oak Ridge Associated Universities in Tennessee. “OK to go in old uranium cave?” I wrote.

Frame told me that, aside from the risk of a cave-in, it was probably safe. The radiation levels in the cave were likely to be low after so many years had passed, though he said it would be wise to verify that with a Geiger counter if I happened to have one.

Thus assured, I drove out Dillon Road in a state of anticipation. My first view of the fabled Golden Lantern was a letdown. Some of the trailers were shabby, with junk-piled yards, and there was no hint of an Atomic Age miracle lurking underneath the hot mineral pools.

Caretakers Ron Titone and Michael Tartaglini showed me into a drab lobby; my nostrils were assaulted by a moldy smell. They opened a door and I looked down a concrete ramp into the dank darkness. I paused on the threshold, thinking of all the arthritis sufferers who had taken this path before me.

I descended into the cave, now a junk room covered with dust. The floorboards were busted; and the caustic smell grew stronger, stinging my eyes. Covering the walls were the big yellow rocks Gibson had hauled in from Idaho.

Radiation cures fell out of favor as the potential dangers became known. No one knows exactly when the Desert Hot Springs uranium cave closed; but in the 1980s, it was in use as a library and reading room.

Before climbing back into the daylight, I reverently laid my hands on the yellow stones and imagined I felt a little tingle.