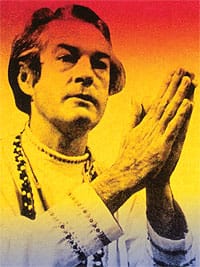 The next time you’re driving to Idyllwild, watch for the turnoff to Fobes Ranch. Amid trophy properties and grazing colts, the LSD revolution flamed out.

In the late 1960s, Fobes Ranch was the hub of an international, multimillion-dollar LSD operation. The distributors were the Brotherhood of Eternal Love, Orange County surfers who sprinkled around acid like psychedelic Johnny Appleseeds. Their figurehead drug king and former Harvard professor, Timothy Leary, lived in a teepee near the apple orchard.

The brotherhood was originally headquartered at the Mystic Arts head shop in Laguna Beach. Under scrutiny by law enforcement, they retreated to the remote Garner Valley ranch, once home to stage driver Ray Fobes and his wife, Maude.

When the hippies moved in, the locals had an idea something was brewing. Anza historian Margaret Jaenke remembers visiting Leary’s ranch with her dad, a cattleman, when he was out looking for strays. They were greeted by lookouts stationed on a wooden tower. “I think everybody knew something was going on,” she says. “It wasn’t anything we wanted to be mixed up in.”

The brotherhood began innocently. As Timothy Leary once said, “The brotherhood was about eight surfer kids from Southern California, Laguna Beach, who took the LSD, and they practiced the religion of the worship of nature, and they’d go into the mountains.”

They were idealists who operated vegetarian soup kitchens, rallied against the Vietnam War, and believed LSD would reform humanity. In honor of the life-changing drug, the water tower at Fobes was painted orange (for Orange Sunshine). The combination for the gate lock was 1943 — the year LSD was invented.

About 30 brotherhood members and friends lived in the ranch house, outbuildings, and scattered teepees. A big garden provided vegetables for soup and fresh mint for tea. An LSD tablet-making machine spit out Orange Sunshine. (Orange Sunshine is the title of an upcoming documentary on the brotherhood by filmmaker William Kirkley.)

On the full moon, brotherhood members would gather in a cave above the compound for a peyote ritual. Leary would say a prayer, shake a rattle, and chant. “We also tried to communicate with flying saucers, of which many had been reported in the skies above the ranch,” wrote former Fobes resident Michael Hollingshead.

One weekend, the rock band Moody Blues dropped by, a visit that inspired the hit song “Legend of a Mind”:

Timothy Leary’s dead.
No, no, no, no. He’s outside looking in.

Things unraveled as the ’60s wore to a close. Up at the ranch, a teenage girl drowned in the pond, and traces of LSD were found in her blood. Leary was investigated, but was later cleared. Then in 1969, the brotherhood’s kingpin, John Griggs, died in his teepee of a psilocybin overdose.

In August 1972, state narcotics agents raided the Garner Valley compound and made seven arrests, leading to the breakup of the brotherhood. In all, 29 people were indicted in the drug ring that came to be known as The Hippie Mafia. Pinyon resident Bob Tyler owns some priceless souvenirs from Leary’s day in our mountains — items you’ll never see on Antiques Roadshow. One is a card with a butterfly motif; another has the caption “Let Sunshine Do.” Both cards have a hole in the center to hold a tab of acid. The acid evangelists scattered these cards around the mountain towns during their residency.

The full story of Fobes Ranch has never been told. But to learn more, read Tyler’s interview with former Fobes Ranch caretaker Ted Wellman, son of local rancher Bud Wellman. The Q&A appears in the 2008 edition of The Periscope, a publication of the Coachella Valley Historical Society.