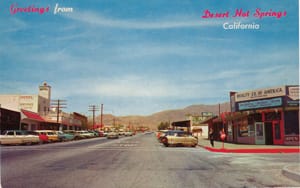 If you lunched at the Sidewinder on a Monday not long ago, you may have noticed a scorching game of desert trivia underway in the corner booth. Bill Dailey and I were seated beneath portraits of Cabot Yerxa and other legendary desert characters that cover the walls of the Desert Hot Springs hangout. I threw out obscure names and book titles and tried to stump Dailey, a newcomer, with my decade-long knowledge of the region.The Children of the Sun? El Centro photographer Hetzel? Chuckawalla Bill?

Dailey not only knew the references, but also stumped me in return: “Ever heard of Lettres Edifantes et Curieuses, a 1724 Jesuit travelogue of adventures in the desert?”

There were two desert fanatics at the Sidewinder booth, but only one of us was a collector. Dailey has been “collecting the desert” for just three years, but his penchant began much earlier. As a boy growing up in Evansville, Ind., he collected rocks, stamps, coins, animal skulls, and hotel soaps. “I still have my hotel soaps,” he told me proudly.

During the Summer of Love, the young hoarder moved west, first to San Francisco, where he collected 10,000 volumes on psychedelia, then to Los Angeles, where he worked for legendary bookseller Jake Zeitlin. (Zeitlin’s bookshop on La Cienega was affectionately known as The Big Red Barn.) Eventually, in 1975, Dailey opened a shop of his own on Melrose: William Dailey Rare Books.

For relaxation, he liked to escape the city and take the mineral waters in Desert Hot Springs. After many weekend visits, he concluded, “Gee I’m spending a lot of money out here. Why don’t I buy a place?”

That’s how he came to own Hacienda Hot Springs Inn and began to collect volumes about the desert. Studies of brain structure in rodents suggest collecting is a variation of the primitive urge to hunt, gather, and hoard. But Dailey says it also is a way of making order when you find yourself in a new place with new interests.

His desert obsession began with classic books by J. Smeaton Chase and George Wharton James and grew to a bibliography of 1,159 desert titles, of which he owns 504. (See excerpts of the bibliography online at www.haciendahotsprings.com).

The books are only part of Dailey’s collection. While rummaging for early desert volumes, he found a brochure on Desert Hot Springs hotels in the 1950s. That led to a fascination with postcards, brochures, and other paper castaways.

From our corner table at the Sidewinder, Dailey and I headed back to the inn, where a wooden case in the lounge displays his postcard collection. A snapshot of Desert Hot Springs in the 1950s and ’60s, there are dozens of small inns with names like Kismet, Rox Lodge, Lido Palms, The Moors, and El Reposo.

You can almost step into these scenes and imagine what a visit to this city circa 1955 would have been like: Your innkeeper would whisk you to your room featuring modern “panel ray” heat. After soaking in the curative waters, you might go out for waffles at the Brush Bunny Café in town. The rates were monthly; nobody came for only the weekend.

The small inns were stagnant for years, but now many are getting new names and new owners. Someday the current crop of hoteliers, including Dailey, will leave behind hordes of ephemera for the next generation of hunters and gatherers.