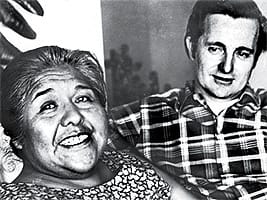 When I make my movie, Coachella Valley: The Epic, the opening scene will show a young UCLA student rolling out of his sleeping bag at dawn to scrub eggs in a henhouse on the Morongo Indian reservation. The star of my movie will be Lowell John Bean, a Palm Springs resident and one of the nation’s most respected anthropologists.

If you’ve never heard of him, that’s because he long ago learned to be a shape-shifter. Like the Cahuilla shamans who turned themselves into bears, Lowell has the gift of keeping himself a little invisible — the better to hear what’s going on.

Because Bean stays out of the limelight, you probably didn’t hear about it when, recently, a distinguished group of former students and colleagues got together at the Agua Caliente tribe’s Spa Resort Hotel for a daylong tribute to him. A seminar in his honor was held at Mission Delores in Northern California. The videotaped proceedings of both events will be cataloged in 20 major archives around the state, including the Bancroft and Huntington libraries.

In the tales told by his friends, Bean’s saga emerged: When he came to the Coachella Valley in the late 1950s, he’d been told by leading anthropologists that there was nothing in the lowly “digger” culture of California Indians to study. Fellow student Carlos Castaneda went off to New Mexico and earned fame writing books about the flashy Yaqui shaman, Don Juan. Against the advice of almost everyone, Bean went to see for himself what was happening in the California desert.

A kindly Mr. Rogers type, Bean grew up in a small farm town in Minnesota. His parents divorced when he was small; his father vanished, and his mother died when he was 12. So when he came to the valley — after a stint as a Marine in Korea — he was alone in the world and looking for a home.

At first it didn’t appear that home would be the Morongo Reservation. When he inquired with tribal leader Jane Penn, she told him they didn’t need any rookie anthropologists hanging around. However, she said, sizing up his gentle and willing spirit, they did need help cleaning eggs. That cinched it. Lowell knew his way around a farmyard. Thus was born Lowell Bean’s First Rule of Anthropology and Life: Make yourself useful.

Hour after hour, sanding the grime off eggshells, Lowell found that, eventually, everyone important came by the hen house. Teachers, lawyers, Bureau of Indian Affairs agents, tribal leaders, and elders all came to talk to Penn. Bean found the story of “Cahuillaland,” as he called the area, unfolding before him. In the evenings, he wrote down what he’d heard and began to see a story emerging — a story far different from the one he’d been told.

“Historians, the public, and even anthropologists had viewed the California Indians as simplistic, primitive people,” he says. “And they weren’t. It turned out these were very complex cultures with beautiful music, epic poetry, sophisticated social organization, and philosophical systems.”

The more he learned about the tribal members, the more he cast off his reserved Clark Kent demeanor, shape-shifting into a fierce advocate for the Cahuilla Indians and protesting, for instance, the biased treatment of California Indians in school textbooks.

Bean went on to teach anthropology at California State University, Hayward, retiring in 1992. He co-founded the Malki Press and the Malki Museum with Jane Penn and Cahuilla elder Katherine Siva Saubel and formed the Ballena Press with Sylvia Vane. He has written — and continues to write — dozens of influential books and papers, including a classic on Cahuilla life: Mukat’s People.

Largely thanks to Bean, California Indian studies enjoyed a renaissance. At the recent gathering, Agua Caliente tribal Chairman Richard Milanovich presented him with a ceremonial blanket traditionally given to important elders.

“Dr. Bean,” Milanovich said, “you have our respect and gratitude.” It may have taken 50 years, but it appears Bean found the home he was looking for when he took a chance on the desert Indians — and when they took a chance on him.