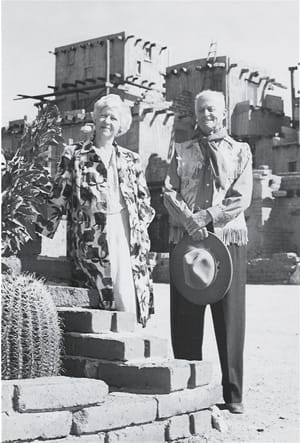 If you want to be a local hero, look through old boxes before they’re thrown out. Some of our best historical stories are of these last-minute “saves”: the archaeologist who jumped into a dumpster and salvaged hundreds of historical photos by former Mecca postmaster Susie Smith or John J. Hunt, who combed through cast-off cardboard boxes and rescued a love story about one of the desert’s best-loved eccentrics.

Cabot Yerxa was an adventurer who sold cigars to miners in Alaska and lived with the Inuit before moving to Desert Hot Springs in 1913. Working by hand for 20 years, he built a quirky Hopi-style pueblo of 35 rooms — his monument to Native American culture. Today it’s one of one of the most crowd-pleasing historical structures in the state.

But in the 1990s, when our story takes place, the pueblo was boarded up and a curator had tossed out many of Cabot’s belongings. Hunt, a Los Angeles screenwriter and author of a book on Desert Hot Springs, was hanging out at the pueblo one day when a caretaker pointed out cardboard boxes that had been shoved outside and left exposed to the elements.

The local hero brushed aside the spider webs and discovered the boxes were full of original letters in Cabot’s own hand. Because the fate of the pueblo was uncertain (it had been threatened with condemnation in the past), Hunt took the letters home for safekeeping. When he put the papers in chronological order, starting with 1945, he discovered a consecutive series of letters on yellow sheets of paper, covered with funny geometric symbols.

Cabot was then 62 and long divorced from his first wife. He was working as an engineer at Torney General Hospital in Palm Springs (the temporary hospital established by the Army at El Mirador Hotel). On weekends, he returned to his Desert Hot Springs homestead called Miracle Hill and worked on his pueblo with his black burro, Merry Xmas.

The letter recipient, Portia Graham, was a teacher of metaphysics living in Morongo with her mother, Barbara. As Cabot wooed Portia in letters, he also informed her that as soon as the war was over he would return to his life’s masterpiece: construction of the massive cliff dwelling on Miracle Hill.

The romance evolved; Cabot introduced a mystical code. Triangles numbered 1, 2, and 3 were meant to symbolize Cabot, Portia, and Barbara: Once Portia was hooked, Cabot’s letters took a utilitarian turn, full of “contractual appeasements,” as Hunt says. He warned his bride-to-be there would be no phone in the new abode: “Peace and quiet is worth more than news and gossip to me,” he wrote.

“He is constructing more than a mere building,” Hunt says. “It’s a way of life.”

The final note in the series was a 1965 Valentine’s Day card. Cabot died of a heart attack just 19 days later.

In a recent ceremony in the pueblo’s courtyard, Hunt presented the original letters to Lisa Lawrence, president of Cabot’s Museum Foundation, to be stored in the museum’s archives.

Illuminated by moonlight, encircled by the thick adobe walls, Hunt read the letters aloud to assembled guests. Even those who didn’t believe in ghosts glanced up now and then, perhaps expecting to see Portia listening from the bower Cabot built for her.