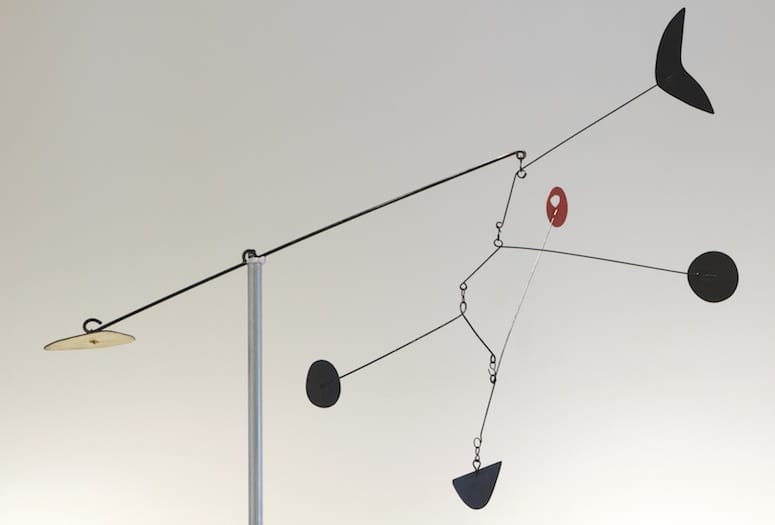 Teetering on a thin silver post, five painted metal fins — one red, the others black — counterbalance a larger yellow fin, each set apart by black wire limbs. The slightest breeze makes this Alexander Calder sculpture dance, as it has for more than 65 years in a collection in Connecticut.

Now the centerpiece of an exhibition at Heather James Fine Art in Palm Desert, the untitled sculpture exudes the late artist’s playful and optimistic spirit, which traces to his childhood fascination with the circus. It’s the largest piece in the gallery’s fluid, season-long exhibition of works by Calder and Pablo Picasso.

“We wanted to exhibit one of the most important artists — one for whom we could get the material for a show of this size,” says James Carona, co-owner of Heather James, whose staff went to great lengths to assemble the exhibition. “We got every Calder book in existence and called collectors, family members, and neighbors to ask if they would loan their artwork to our show. Some of these works have been with the same family since the ’30s and ’40s.” The 66-inch-tall untitled mobile sculpture was commissioned in the 1940s and originally installed to cover the lid of a well on the family’s property, which is near the artist’s former home. Calder created it in the years after World War II, when his dynamic, colorful work evolved sculpture from the closed realm of the bronze figure. Calder pioneered kinetic art with delicately balanced limbs and biomorphic elements hanging from rods and wires moving to the forces of nature.

Calder created more than 22,000 wire sculptures, mobiles, and stabiles, monumental outdoor sculptures, paintings, works on paper, toys, jewelry, and other joyous and wonderfully down-to-earth objects that are satisfying for anybody from small children to the art world elite.

As Heather James pursued works to exhibit — some of which were included in important exhibitions at the Guggenheim and the Whitney museums in New York, and the National Museum of Modern Art in Paris — Carona often was surprised by the quality and diversity of the pieces that became available.

Hayden Hunt, the gallery associate who researched and contacted the collectors, heard one jaw-dropping anecdote after another. One Calder descendent pointed Hunt to a cousin who “had a bunch of Calders.” A man who said Calder gave his father a wood sculpture when they were roommates in 1928. And there’s also the cow sculpture that Calder made for a neighbor who was a dairy farmer. The Museum of Modern Art in New York included the piece in a 1953 exhibition. “These are the things that don’t get shown,” Hunt beams, adding that the works, at press time, were en route to Palm Desert. “They’re interesting objects with great stories.”

Other pieces joining the exhibition, Hunt says, include a rare wire head, jewelry, a children’s pull toy made of Ballantine beer cans, and ephemera, including correspondence with drawings on them.

“We got a momentum going among family members,” Carona says, adding that the Calder foundation is authenticating works before the gallery exhibits them.

Meanwhile, in an adjacent salon at Heather James, the Picasso exhibition is a reprise of the gallery’s successful 2010 show that unfolds with a survey of ceramics, original works on paper, as well as graphics, including important linocuts, etchings, aquatints, and lithographs.

Picasso — one of the most prolific and influential artists of the 20th century — contributed to several art movements, but is best known for pioneering cubism, the geometrically composed style he invented to address the dimensionality dilemma in his portraits and still lifes. The pièce de résistance is Man Smoking a Pipe (1971), a wash and crayon drawing on blue paper that reflects the cubist style, although he created this work late in life. “The color is intense because of medium,” Carona says, adding that the piece has been loaned for the show and marked “not for sale.” “You can see the cubist influence, as it shows the frontal and profile at the same time.”

Another standout is Buste de femme d’après Cranach le Jeune (1958), one of Picasso’s most important linocuts; it represents his first experimentation with color in the medium. Other prints from the edition belong to major collections including the Tate Modern, Museum of Modern Art, and Metropolitan Museum of Art. The portrait represents Picasso’s transformation of a similarly titled 1564 painting by Lucas Cranach the Younger that belongs to the Kunsthistorisches Museum in Vienna. He depicted the young girl in frontal and full profile view simultaneously, fusing Cranach’s classical portrait style with his cubist style.

The playful side of the artist comes through in some of the aquatints in the exhibition, including three from the summer of 1964, when he explored the theme of smoking: Fumeur à la Cigarette Rouge (Smoker with Red Cigarette), Fumeur (Smoker), and Tete d’Homme au Maillot Rayé (Head of the Man in Striped Shirt). In these pieces, Picasso’s energetic lines and colors punctuate the happy disposition of his subjects.

“We’re impressed with the quality and rarity of the works we were able to acquire for the show,” says Carona, noting that many works are not for sale, but for their visitors’ enjoyment. “We want people to come in and be inspired by what they see. We enjoy learning the backstory of the work and sharing it here at the gallery.”

Calder and Picasso continues through May 30 at Heather James Fine Art at 45188 Portola Avenue in Palm Desert.