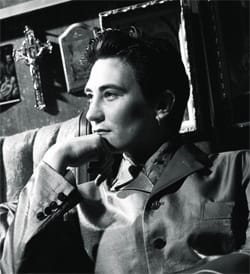 It’s another blazing day in the California desert, but k.d. lang has little interest in sitting in front of a monstrous air conditioner. She’s more likely to be found cleaning bathrooms at a secluded Tibetan monastery in the Mojave Desert.

“It’s all about service,” lang says. “I drive up to this monastery, and I just do the work. I clean toilets. It’s service. It’s duty.”

Lang — who performs Nov. 5 at Palm Springs’ Pavilion Theatre to benefit Palm Springs Art Museum’s Performing Arts Council — says raising money for the arts is an issue that lives and breathes inside her. “Obviously as an artist and a singer, I think about the importance of the arts and liberal arts,” she says. “And it goes much deeper for me. The arts really enhance and help to balance society. We’re seeing a deficit in our society now, where the arts aren’t mattering. Anything I can do to promote the arts is a part of my duty.”

On this summer afternoon, lang was ripe to consider the Fahrenheit 451-style elimination of arts and music programs at schools across the country. It’s a harsh reality that writers such as Ray Bradbury predicted decades ago.

“This is very, very calculated — the elimination of the arts,” lang says without hesitation. “Let’s think about this. The arts instill individual ques-tioning and individual thinking, and certain people obviously don’t want to cultivate that individuality and independent thinking. Globally, it’s of ultimate importance to humanity.”

Imagine a multiplatinum-selling performer known the world over discussing concepts such as service and duty. It reflects her choice decades ago to become a Tibetan Buddhist. “I’m in the Buddhist world,” lang says. “This is ‘the way’ for me. Selflessness and duty enter every aspect of my life. I always want to put an emphasis on service and volunteering.”

Lang’s performance comes three days after her 45th birthday. Rather than shy away from revealing her age, she proudly discusses it.

“I’ve always been taught that a woman’s voice is in her prime at 45,” she says. “I feel it. I’m going to try and record as much as possible over the next few years. That’s why I’m playing a very limited number of gigs this year: four in August and four in November.”

She’s pleased to be returning to the Coachella Valley. “I’m really excited about coming back to Palm Springs,” she says. “Every once in a while, I make it back there; and it’s always an unusual event, playing Palm Springs.
“I’ll be doing a little more country than usual, because we’re working with this great fiddle player I hired from L.A. named Gabe Witcher.”

Lang is aware — and honored — that her performance coincides with Gay Pride weekend in Palm Springs. “To me, it goes along with my thoughts about liberal arts and my Buddhism,” she says. “It’s about celebrating who you are and being proud of it, without needing to have an aggressive edge.”

Lang explains that the “Do unto others …” adage certainly fits into Buddhism. “Let people live their own lives, and apply that to others,” she says.

“It’s so important that we as gays and lesbians don’t take ourselves too seriously and that we realize we’re
part of the larger culture, and then maybe some barriers will break down,” lang says.

“I think it’s important to stay open to everything. And even though we don’t necessarily agree with the ideas
of the politicians who are in control, we still need to stay open. If we start preaching, then we’re no better than they are.”

She often waxes political with Tony Bennett, one of her closest friends. “Tony is so busy he makes me look really laid-back, like Jimmy Buffett or somebody,” lang says with a robust laugh. “Tony is always working. I have another duet record coming up with Tony, celebrating his 80th birthday. When I’m with him, it’s an education. He’s the last of an American era of singers.”

Lang says some of her most satisfying duets have been with Bennett and the late Roy Orbison.

“Obviously, working with Tony and Roy have been [career] highlights,” she says. “It’s so much fun to share the mike with someone. It’s like dancing with them. You’re creating together, forming this synergy. There’s nothing like it.”

Talking about aging superstars such as Bennett brings lang back to musings about turning 45.

“Yes, 45,” she reflects. “We’re in such a youth-oriented society right now that it’s important that songwriters like me who are getting older … that their music still thrives. And our points of view and wisdom we attain are very important to pass on.

“So it’s important to support your own art and others who are older, because they’re passing on wisdom to younger generations.”

Lang doesn’t try to compete with singers 20 to 30 years her junior. “I have had my moment in the sun, so to speak. I have spent a lot of time in this business, and I realize I am who I am,” she says. “I was never blond and beautiful, and that’s actually my biggest asset: being who you are and accepting yourself. … It’s really important in the overall culture, especially in the gay culture, which is really ageist — especially the gay male culture, which focuses on being beautiful and young. We don’t really cultivate the elders in our gay community; and we should, because they did a lot for our freedom.”

After her four-city tour in November, lang will return home near Los Angeles to paint, record, or drive deep into the desert to visit the Tibetan Buddhist monastery.

“I’m just getting the work done,” she says. “I love to paint, especially when I’m in the writing process or recording process.

“The blank canvas of a painter and the blank page of the lyricist are two entryways into the soul,” she continues. “As difficult as it is to complete a lyric or a poem, there is really something about striving to complete a painting. There’s something about the paints, the movement, the fluidity of the paint — it kind of mobilizes the creative juices for me. And cooking and cleaning does the same thing for me. It’s all part of the same stew.”