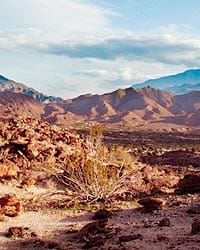 En route to Stone Eagle Golf Club in Palm Desert, you expect to view yet another impressive, pristine mosaic of tee boxes, greens, and fairways under construction. Nothing extraordinary — simply one more jewel in the crown of this world-famous golf Mecca. Once you arrive and begin the slow ascent to the golf course, prepare for a visually stunning sight.

Anchored within a mountain bowl and nestled against the imposing granite walls within the Santa Rosa and San Jacinto Mountains National Monument, the high-rise course peaks at an elevation of 1,150 feet and proffers magnificent vistas as far as the eye can see. Stone Eagle encompasses sharply creviced canyons, scenic ravines, ancient boulder formations, and prolific clusters of barrel cacti — only a sampling of the natural wonders that mesh with the course and its expansive fairways. Though the upper elevation stretches more than 640 acres, the course itself covers about 220 acres, only 80 of which will be turf; the rest will remain in its natural state. Integral to the distinctive Stone Eagle experience is its designation as a “pure” golf club — no structures will surface on or around the course, and the only motorized vehicles in sight will be quiet golf carts undulating amid the vast expanse.

Perhaps most significant, Stone Eagle developer and 30-year valley resident Ted Lennon of Lowe Enterprises is rolling out an innovative course tailored to the striking terrain and designed to minimize negative impact on the environment.

At the outset, Lennon envisioned an “environmentally friendly” and inconspicuous golf course, well away from the valley floor, that would replicate many of the natural design elements of his previous projects, such as The Reserve in Indian Wells. In early 2004, Lowe acquired the 700-acre Stone Eagle parcel, with agreements to ensure preservation of the national monument’s sensitive ecosystem and support conservation efforts of peninsular bighorn sheep and other endangered species. Lennon is a founder and board president of the nonprofit Friends of the Desert Mountains, soon to expand its environmental stewardship as The Coachella Valley Mountains Land Trust. He plans to introduce an annual charity golf tournament, with proceeds directed toward the group’s preservation initiatives.

“One of the key issues [regarding land development] is that of attitude,” asserts Palm Desert Mayor Buford Crites. “Ted Lennon and his colleagues have always approached this project with ‘What do we need to do?’ versus ‘What is somebody going to force us to do?’ That leads to more cooperative relationships, a quicker turnaround for them in terms of processing applications, and a better project.”

Wire fencing with subterraneous modifications will protect the bighorn sheep and desert tortoise from stray drives. Native cacti will be salvaged and reintegrated into the landscape. Moreover, for every acre of golf course land, Stone Eagle will provide three acres of open land.

Lennon chose Tom Doak, renowned architect of Pacific Dunes in Bandon, Ore., which is one of the top modern U.S. golf courses. As lead architect of Renaissance Golf Design in Traverse City, Mich., Doak is at the forefront of minimalist golf course architecture. He is widely known for his attentive and hands-on style, as well as his commitment to preserving the environment. Consequently, Weitz Golf International, the company constructing the course, will displace fewer than 500,000 cubic yards of the terrain; many new valley courses move up to four times that amount.

“Tom spent hours hiking the site so he could understand what he might have to work with,” Lennon says. “I wanted it to be minimalist, and I wanted to maximize the site’s awesome natural features. One of Tom’s hallmarks is to keep things as natural as possible.”

Doak was hooked on golf course design by the age of 12 and, early on, assisted Pete Dye with the blueprint for the TPC Stadium Course at PGA West in La Quinta. Stone Eagle is Doak’s first California design, and he embraces the challenges and opportunities of Stone Eagle’s topography.

“Stone Eagle is a dramatic site,” he says. “It’s very steep, and the trick was to figure out how to lay in a course and melt down the natural contours to work with. The cool part from the start has been visual. We’ve tried to tie the turf areas together between holes; a fairway for one hole ties diagonally toward a hole going in a different direction. And some of the long views are now coming into focus. It’s very different from a typical desert golf course.

Slated for completion in November, the course will feature practice facilities; The Aerie, a panoramic open-air pavilion at the 19th hole; and a midcourse refreshment stop, hidden by massive granite boulders.

The more than 100 Stone Eagle founders include Bill Gates, Greg Renker, and golf pro Peter Jacobsen. A unique characteristic of membership is that golfers need not own a residence to join. In addition to individual and spousal memberships, Stone Eagle offers a national category for enthusiasts who do not own or lease a residence within a 60-mile radius of the club.

True to its moniker, Stone Eagle stands poised to soar as one of the desert’s premier golf clubs, one that many hope will exemplify the critical balance between recreation and preservation.