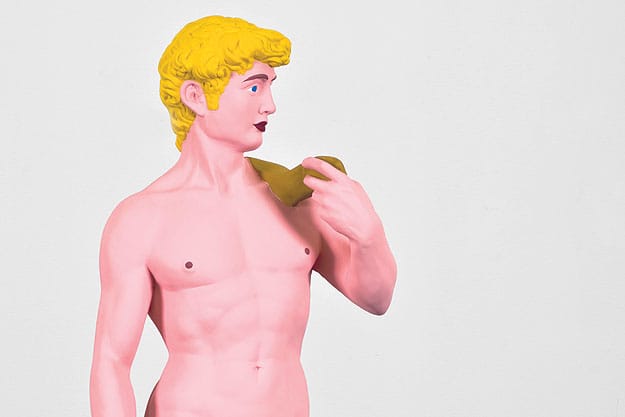 A rose is no ordinary rose when artist Barbara Kruger screen-prints one on vinyl and superimposes the words “Money Makes Money” over the image. Installed only a few feet away from Maurizio Cattelan’s Sans titre (Philippe), a plastic and fabric sculpture of a sleeping homeless man, the Kruger piece punctuates a poignant social statement in Beg Borrow and Steal, which opens in February at Palm Springs Art Museum.

Loaded with clever juxtapositions, twisted meanings, and images that look strangely familiar, the art in this star-studded exhibition openly references and riffs works by other artists. A sculpture by Hans-Peter Feldmann, for example, crudely replicates David, the Renaissance masterpiece by Michelangelo, in Fiberglas and paint, and a Cindy Sherman runway model photograph defies fashion’s seductive magnetism.

The idea for Beg Borrow and Steal — which first unfolded in 2009 at the Rubell Family Collection in Miami — began taking shape after artists Kelly Walker and Wade Guyton enlightened the Rubells about how artists like Marcel Duchamp, Andy Warhol, and Richard Prince created pathways for younger artists to spin their predecessors’ ideas, styles, and images into new works of art. In fact, the show’s title comes from a quote attributed to Picasso: “Good artists borrow, great artists steal.”

For decades, artists have created art about art and “stolen” imagery. Beg Borrow and Steal offers many well-known examples by internationally renowned artists. The 2009 exhibition coincided with the important Art Basel Miami Beach fair and serendipitously amid the controversy over street artist Shepard Fairey’s use of an Associated Press photograph of Barack Obama in the now-iconic “Hope” poster for the 2008 presidential campaign. The graphic landed Fairey in a copyright infringement lawsuit, and he was ultimately fined $25,000 and sentenced to two years of probation.

Beg Borrow and Steal includes about 135 paintings, sculptures, photographs, and videos — about half the number of works that were in the Miami exhibition — by 47 artists of different generations and is accompanied by the Rubell Family Collection’s large-format, 272-page catalog.

“Never before has our museum exhibited so many important contemporary artists at the same time,” says Daniell Cornell, deputy director of art and senior curator at Palm Springs Art Museum. Cornell adapted Beg Borrow and Steal to spread over the main wing in the museum’s Palm Springs venue and the entirety of its new satellite location, The Galen, in Palm Desert.

“These artists looked at ways to get people to process meaning through visual imagery they thought they already knew,” Cornell says, turning his attention to “picture generation” artists such as Baldessari, Kruger, and Sherman, as well as younger photographers such as Hank Willis Thomas, who traces the history of African-Americans in advertising by removing the text from the images. Hyperrealist graphite drawings by Robert Longo (Men Trapped in Ice) and Karl Haendel (Screaming Baby, Times Square, and Anita Hill) also fit into this category.

The “picture generation” artists lifted photography into the realm of fine art. “Photography is the most logical imagery to appropriate because of the [technological] ability to manipulate it,” Cornell says. “That generation of artists began to get people to understand how visual language works — to step back and think about how it is we attach meaning to the visual experience. That’s why photography became so dominant in the art world.”

“This is significant, not only because Palm Springs is so close to Los Angeles, but also because Southern California has had an influence on the use of appropriation in art,” Cornell says. “When I saw the show in 2009, one of the things that stood out to me was the place of younger L.A. artists in the national dialog.”

Likewise, with Beg Borrow and Steal, Palm Springs Art Museum hopes to gain visibility beyond the region. “In 2009, we took our Collectors Forum [a group of contemporary art collectors who study artists and donate works to the museum] to Art Basel Miami Beach for the first time,” Cornell says. “We had an invitation to see this show and talk to the Rubells. The group as a whole said this show would show people how serious we are [in the Greater Palm Springs area].”

The exhibition marks the second collaboration with the Rubell family. In 2008, Palm Springs Art Museum mounted Against All Odds: Keith Haring in the Rubell Family Collection. Don and Mera Rubell attended the opening and participated in a conversation about Haring and their contemporary collection, widely considered among the most important in the United States. They’ll return Feb. 12 for a presentation and reception.

It also marks the first exhibition installed simultaneously in Palm Springs and Palm Desert. “You need to go to both locations to get the whole show,” Cornell says, noting some of his favorite pieces in each venue.

In Palm Springs, the exhibition begins with a dialog between artists from the East and West coasts. It includes Holzer’s “truism” plaques, which parlay text into art (Protect Me From What I Want and Laugh Hard at the Absurdly Evil); Jim Lambie’s Tangerine Dream, an old mattress he transformed into a vibrant send-up of Robert Rauschenberg’s bed; and Charles Ray’s Male Mannequin, which recasts the neoclassical David as a cold, naked human figure.

In Palm Desert, standing figures occupy the center of the space near the entry, showing the different ways artists have approached the figure — from Renaissance (Feldmann) to Modern (Aaron Curry) to Expressionist (Thomas Houseago).

“Their works,” Cornell says, “all contribute to the discussion about how borrowing — or stealing — ideas, images, and techniques comment on the past and create something new.”