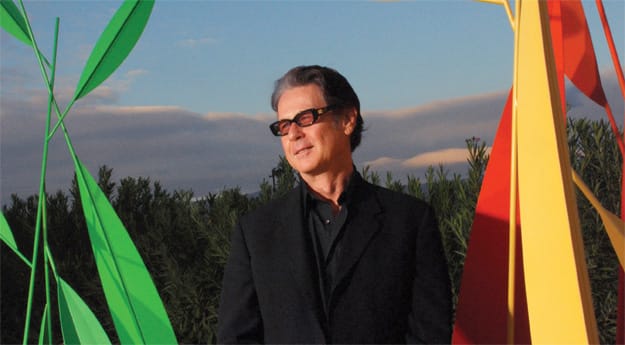 Raindrops dripped on Christopher Georgesco and his fellow dinner guests at the Beverly Hills home of Tim Braseth in September 2007. Georgesco — a sculptor in Desert Hot Springs — was in the 1958 midcentury marvel designed by his late father, architect Haralamb Georgescu (the family changed the “u” to an “o” after being profiled as communists), for a pre-remodeling “Eve of Destruction” dinner party. Chris had stayed in the house as a boy, because it was built for his father’s friend Pier Maria Pasinetti — an author, UCLA professor, and Chris’ honorary uncle. He recalls Pasinetti as a bachelor with nubile girlfriends who threw swinging parties with rock bands. “The neighbors called him Passionetti,” he says.

“Julius was familiar with the house and thrilled to get the opportunity to photograph it,” Braseth says. “The house was published in the January 1959 issue of Arts & Architecture, but Julius did not get the assignment then. It went to his friend and colleague Robert Cleveland. Julius is excited to finally photograph it and pay homage to his friend.”

Prominent in his native Romania as special architect to King Michael, the elder Georgescu fled communism to the United States in 1947. Last May, his son was an honored guest at a centennial celebration —  Haralamb H. (Bubi) Georgescu – A Romanian Architect in the U.S.A. — at the University for Architecture and Urbanism in Bucharest. He was accompanied by Braseth, writer Jeffrey Head, and Wim de Wit of the J. Paul Getty Museum, which acquired the Georgescu archives in October 2007.

Architectural historian/author Alan Hess (Palm Springs Weekend) calls Georgescu “one of a number of talented architects from midcentury L.A. … beyond the big names like Richard Neutra … that we are rediscovering. [Georgescu’s] houses are striking and original interpretations of modernism. Tim’s house is one of his best.

The trip to Romania was the first to the family homeland for Chris, who was born in Nebraska in 1950. As a child of émigrés, he endured being called a communist. “I wanted to be a cowboy,” he says. So uncovering his heritage was the ultimate turnabout. Between media interviews, he saw many of his father’s impressive 1933-45 edifices, including the Aro Theatre and Obor market. He also perused masterpieces by Brancusi.

Georgescu came to Palm Springs in 1957 and was employed by Howard Lapham to help remodel the Chi Chi club. In an interview before his death last year, Lapham chuckled at remembering the young Chris “running around yelling, ‘My daddy makes $100 a day.’”

Georgescu always supported his son’s talent, keeping him well supplied with art materials. When still in high school, Chris emancipated himself, living in a Volkswagen bus and telling each of his now-separated parents that he was staying with the other. Soon he holed up in Venice, then a cheap retreat for artists. “I was the kid knocking on the door” of older artists like DeWain Valentine and Ron Cooper.

Chris’ first solo exhibition — at the Newspace gallery in Los Angeles — came when he was in his early 20s. Edward Albee pulled up in a taxi and bought a sculpture. Later, Chris visited the playwright’s three-story loft in New York. “His writing [studio] was a freight elevator,” Chris recalls.

On Nov. 22, 1977, Chris was talking on the phone when he heard his father at the door, then a cry of “Don’t!” — and four shots. “He survived Nazis; he survived communism. He died in Los Angeles, coming home from dinner,” Chris says.

After the still-unsolved murder, Chris went into creative freefall and was blocked for eight years. Meanwhile, at a New Year’s Eve party he met the head of a natural skincare company. “Two weeks later,” he says, “I found myself at the Ritz in Paris in an Armani suit.” Chris became her art director. Eventually, he resigned and began to weld sculptures and paint pictures again. Now he has installations all over the world, from Pasadena City College to the Grand Hyatt in Tokyo. In his own community, he has collectors who live “in exquisite modern homes in Palm Desert and La Quinta.”

In 1994, Chris married Maria, who works for fashion designer and boutique owner Trina Turk. Turk, who sits on the Los Angeles Conservancy board, connected the Georgescos with Braseth in 2007. Although the rehabilitation of his house is complete, the story continues. Braseth says the house will be designated a cultural historic landmark. “It’s just a matter of time and process,” he says.

According to Head, discussion is underway about a book on Georgescu’s career. “One possibility is to partner with the Getty Research Institute and the University of Architecture and Urbanism in Bucharest to collaborate on a book,” he says. Already the catalog for the 2008 exhibition has won the award for best architecture book of the year in Romania.

Another option is to produce a documentary film. “In some ways, this could reach a larger audience,” Head says, “and dynamically show Georgescu’s work here in the U.S. and in Romania.”

Whatever develops, Christopher Georgesco says, “It’s almost mystical that my father could come back [to prominence] around his 100th birthday. And I find it fantastic that the two of us, with his house and my sculpture, are together now.”

To see more photographs of the Pasinetti house, as well as photographs and drawings of other buildings by Haralamb Georgescu and sculptures by Christopher Georgesco, visit www.georgescoart.com.