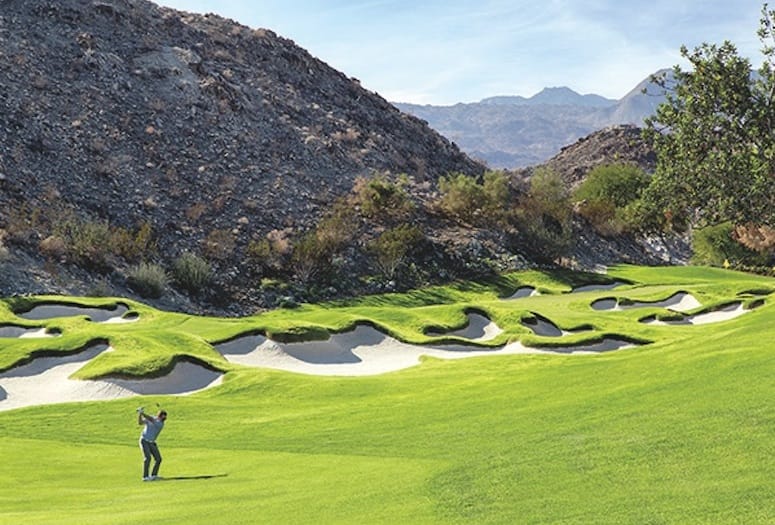 In the December issue of Golf Digest, the publication’s panelists named the Mountain Course at The Vintage Club the “Best New Remodel” in a ranking system that was so thorough as to eschew “informal editors’ picks.”

The accolade isn’t merely in reference to the Coachella Valley, or Southern California, or the West Coast — it’s a canvass of the entire country.

In Golf Digest’s first such ranking since 2009, one panelist commented of the Mountain rework: “If you like eye candy, this is pretty damned good. Plenty of clever fall-offs and mow-outs around the putting surfaces to keep things interesting.”

Debuted in 1980, the Mountain Course is defined as both special and seminal in a vast and celebrated portfolio by golf course designer Tom Fazio. The course’s four-stage remodel (or “updates,” as Fazio refers to them) was completed in the summer of 2014 with a focus on the latter nine.

Opinions on the remodel may vary in focal points, but all are in concurrence that the new Mountain Course is worthy of its latest national distinction. “I think it’s more fun, more beautiful,” said The Vintage Club's founder and developer, the late Mick Humphreys. “I would say that Hole Nos. 12, 13, and 15 are the ones that dramatically changed the golf course. The 13th and 15th holes play harder, but, all told, it’s not so hard that it’s a distinct disadvantage to the higher-handicapper.  Strategizing to gain this kind of beauty makes it a better course than it was before.” The Mountain Course redesign includes a new water feature that now flows along the left side of the seventh hole.

Humphreys collaborated closely with Fazio throughout the rework process. Of the finishing work from 2014, the founder reflected with ample detail.

“The 12th was a hole where you drove across a bunker; if you played it in the best possible way, you could go across the bunker and then across the bunker again into the green,” Humphreys said. “What we decided to do was take the bunkers out and place a water system that goes down the 12th and eventually ends in a lake created on No. 15. So, the 12th now has water all along the left side.”

The hole’s new routing and hazard are regarded as the most analyzed part of the rework. Along with the added water feature, the redefined putting surface on Hole No. 12 is a key element to the update.

The short, par-4 13th also tracked among Humphreys’ update favorites. “We have a series of bunkers running across the fairway to drive across to the landing area,” he explained. “They’re quite beautiful, sculpturally. And that green is very small and requires great accuracy with the approach. Based on the length of the hole, it gives any level of player the opportunity to go for it in two, which I think is a really fun design element.”

Alterations to the 15th also count among the course’s new highlights. “There’s water on the left side of the green, and the hole is set up so that, compared to the way it previously played, it now plays shorter, so that you can play a ball that gets up on the plateau and get a good view of the green,” Humphreys said.

In conjunction with the on-course revamp, The Club’s practice area also enjoyed a thorough polishing. “The part in which I had the deepest involvement was our short game area, for which Tom Fazio was gracious enough to let me pencil out my vision of how the area would work,” says David Woods, director of golf at The Vintage Club.

Members may now enjoy a complete engagement of wedge prep. “I just wanted to ensure that any shot within 40 yards of a green could be practiced,” Woods says. “So we’ve got sidehill, downhill, uphill lies, some mounded areas, different heights of mow cut. We’ve got individual bunkers with either high or low lips, and a giant bunker where, if we’re doing a school, we can get 10 people in there. To me, we created the best short game area in the Coachella Valley. ”