Ricardo Breceda with one of his works appearing at Indio Grand Marketplace.
PHOTOGRAPHS BY SUSAN MYRLAND

“Do you want me to show you two of my best pieces?” asks renowned metal sculptor Ricardo Breceda. He points toward his daughters. “Right there!”

Lianna Arroyo and her sister Araby Arroyo respond with a smile and the tiniest eye-roll, which says they’ve heard this line before. Still, they are proud of their father. It was Lianna who started his artistic career.

When she was 6 years old, Lianna wanted a Tyrannosaurus rex — a life-sized one. Breceda had no training in art, welding, or engineering. He’d worked in construction until an accident ended his career. At the time, he was traveling around the Southwest, selling exotic cowboy boots. Nevertheless, he built his daughter a T. rex out of sheet metal — and went on to build a Spinosaurus and a Triceratops.

That was almost 18 years ago. He’s lost count of how many creatures he’s created since then. He thinks it could be more than 600. Each one involves a delicate process of design and balance, which sometimes means disassembling the piece for transport and reassembling it onsite.

Why does he build such massive sculptures? “It got a lot of attention, and I liked it,” Breceda says. “I keep making things, and now I’m an artist.” 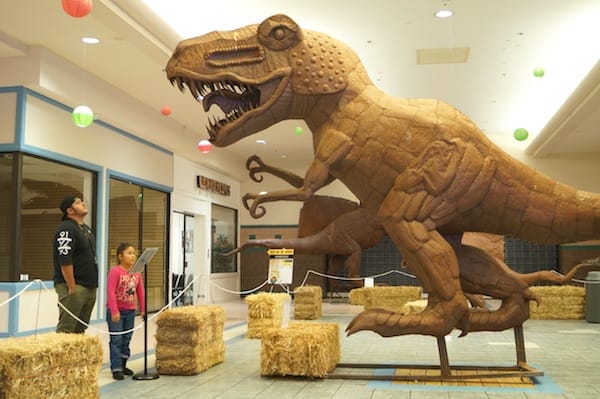 Through Jan. 31, the Indio Grand Marketplace is hosting 25 of Breceda’s artworks under the theme, “Jurassic Wild West.” A Tyrannosaurus rex dominates the east end of the mall, with Velociraptors and Spinosaurs for wingmen. A dragon faces off against a nail salon. Moving west, the selection becomes more, well, western, with bighorn sheep, a cowboy and miner, horses, cactus, desert tortoises, and Breceda’s interpretation of the iconic James Earle Fraser piece, End of the Trail.

There’s also a rooster, a couple of reindeer, and Don Quixote, appearing far less quixotic than you’d expect. Breceda’s interests are eclectic. If a creature doesn’t exist in his collection, it’s because “I haven’t had the need to do it,” he says. All sculptures in the Indio Grand Marketplace are for sale.

As part of “Jurassic Wild West,” an enormous cobra will be placed outside the Tack Room Tavern at the Empire Polo Club in Indio. (Real estate development firm Haagen Co. owns both the mall and the polo grounds.)

More of Breceda’s work can be seen at the La Quinta Library, where a T. rex dominates the courtyard, but the Grand Marketplace is an opportunity to explore the range of Breceda’s imagination and technique up close. Texture is achieved with wires, hammers, and tricks he’s learned over the years, such as using the byproduct of welding, called slag, to suggest manes or fur. Although the bases can be recycled material, bodies are made from new 22-gauge metal to ensure a consistent look and thickness. Sculptures are silver at first, gradually rusting to a rich chocolate patina. 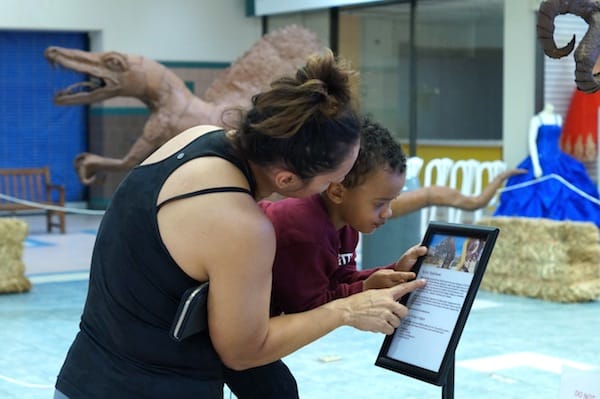 Suzie Carter and Jace Carter read about Ricardo Breceda and his sculptures.

Dinosaurs may seem to be a wry comment on the future of retail, yet they are livening up the Grand Marketplace as it awaits redevelopment. On a Friday afternoon, 6-year-old Santiago Muñoz-Serrato, dressed in his Jurassic World pajamas, was torn between wanting a toy he’d spotted in a nearby shop and posing for his mother’s photo. Another visitor, Nina Miller, drove from Yucca Valley to see Breceda’s work. “I came for the Westerns but that dragon is a religious experience,” she said.

Twelve sculptures, based on the signs of the Chinese zodiac, are coming to the Desert Hills Premium Outlet shopping center in Cabazon. Five are on-site so far, located behind the East Village at Entrance 2. Breceda has spent the past eight months working on the rest, which he’ll deliver before the end of the year. Since 2019 is the Year of the Pig, look for something porcine in a prominent spot inside the West Village at Entrance 4.

Breceda’s best-known installation could be the Sky Art Sculpture Garden, which sprawls over the Galleta Meadows Estate in Borrego Springs. In 2007, the late Dennis Avery, son of the founder of Avery Dennison Corp., the office label company, commissioned a set of Peninsular bighorn sheep. That project was followed by a pair of Gomphotheres, elephant-like proboscideans that lived in the Anza-Borrego region around 9 million to 1.4 million years ago. Breceda began to add ground sloths, mammoths, saber-toothed cats, and peccaries. Plus dinosaurs, more dinosaurs, because children love them. 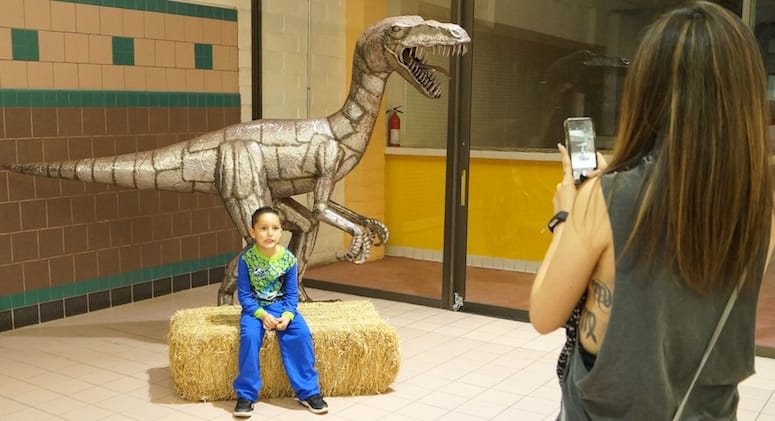 Sandra Muñoz takes a picture of her son, Santiago Muñoz-Serrato, making a dinosaur face while wearing his Jurassic World pajamas.

In Ricardo Breceda: Accidental Artist, author Diana Lindsay wrote, “From the very beginning, Dennis thought that life-size sculptures would ignite the imagination of children and possibly more interest in science and in the Plio-Pleistocene animals of the area. He viewed the sculptures as three-dimensional representations of fossils buried for millions of years.”

As Avery and Breceda’s collaboration deepened, the series expanded, eventually including historical figures and the masterpiece, a 350-foot-long dragon with a sea serpent body and rattlesnake tail, undulating across Borrego Springs Road. All told, there are 130 to 140 sculptures in the area.

“We didn’t think it was going to be such a huge project. We thought it was going to be one piece,” Lianna says. “My dad had to hire apprentices. It’s the craziest, most complicated project we’ve done so far. We had to transport, cut pieces, and rebuild them there, in 100-degree weather.”

“He likes somebody bringing projects to him and saying ‘Can you create this?’ He loves that challenge. He always says his custom pieces are going to be his best,” she adds. “Like he made me happy, he wants to make everybody else happy with his art. That’s what drives him.”

Breceda’s studio is in Aguanga, about 18 miles east of Temecula, where hundreds of sculptures fill an open lot and dot the surrounding hills. Visitors are welcome to observe a work in progress, but Breceda says he doesn’t weld as often as he used to because his eyesight isn’t as good as it once was. He’s turning welding over to his assistants so he can spend time with customers.

He’s a gregarious man, laughing heartily when he greets a mall worker or teases Lianna and Araby. His voice softens when he talks about his art. 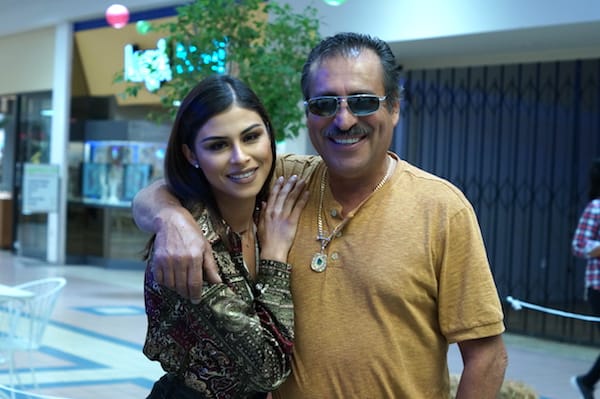 “It will rust. Someday it will be dust. Nothing there,” he says.

Today, though, that day is a long way off.