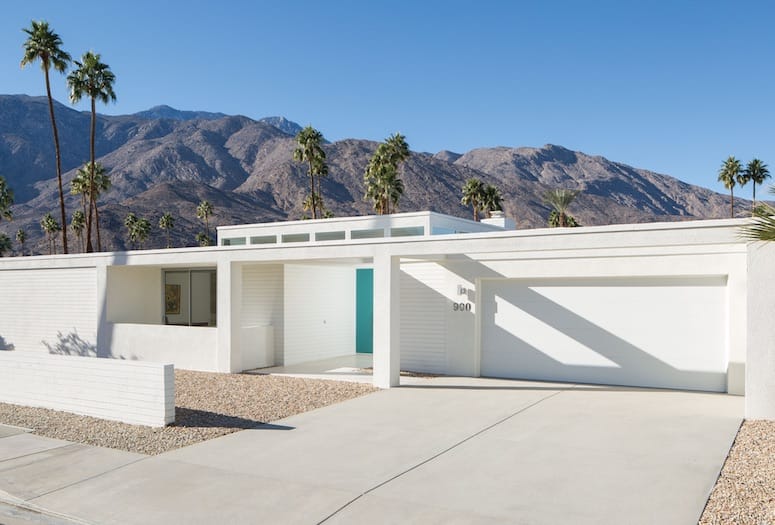 In introducing Palm Springs to the winter getaway he created for Edgar and Liliane Kaufmann, architect Richard Neutra exhibited keen insight into what the future promised citizens of the world.

“The desert, from Arabia to Peru, has been the latest section of nature to be made habitable and recognized for its recreational possibilities,” he wrote for a 1947 newspaper article. The Kaufmanns had commissioned Frank Lloyd Wright for Fallingwater, their Pennsylvania residence. So Neutra faced a formidable task in giving his clients a West Coast counterpart, which is to say that he needed to epitomize the organic approach in an arid setting.

After describing specific features of the home, Neutra added, “But there are more imponderable ones: to fit the subtlety of the desert landscape, which is easily defiled and damaged in its charms and potential satisfactions. It is indeed a most sensitive landscape, where a sunrise may be jarred by a far distant telephone pole or the optical echo of starlight on the sand dunes may tracelessly dissolve under the shrill glare of a single electric bulb.”

Neutra and other architects with substantial imprints in the Coachella Valley have provided footing for the desert lifestyle. Leave it to the plainspoken Albert Frey to distill the overriding sensibility of the Coachella Valley vernacular. When asked his design principles for the 1999 book Albert Frey / Houses 1 + 2, he replied, “The respect for nature.” 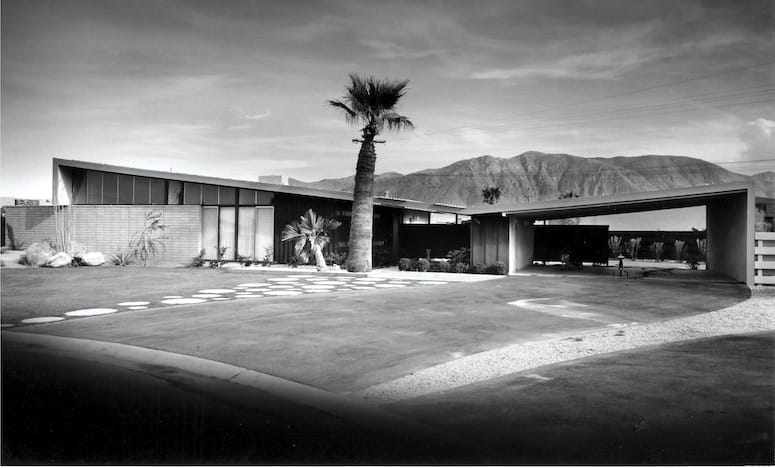 While metropolises pierce their skies with towers, Coachella Valley cities embrace ground-hugging structures that preserve the grandeur of panoramic horizons and dynamic mountain vistas. A majority of desert homes lack staircases, and even townhouses and condominiums don’t provide Otis Elevator with sustainable income. It seems that the Coachella Valley canon is to let nature (i.e., sky-reaching palms) preside over the manmade — like Frey suggested.

In the 1920s and ’30s, Spanish Colonial style found favor particularly in Southern California. Adobe brick and stucco, roofs clad in red-clay barrel tiles, Saltillo floors, and exposed ceiling beams matched the rustic aura of early development. As communities took shape in the 1930s and ’40s, so did California ranch architecture. Open layouts, large windows, wide verandas, and attached garages similarly complemented a sun-soaked informality. Ranch style fit the western themes of guest ranches that offered novel escapes for Hollywood elites — like Walt Disney, who took up residence at Smoke Tree Ranch. By midcentury, the Coachella Valley had become popular as a place to live or own a winter home. Its distinctive environment inspired innovation among architects whose names today elicit an impressed “Ohhh.” Variations of modernism brought avant-garde elements that today attract an international crowd of architecture aficionados.

“Contemporary materials — in combination and composition with the oldest known modern conveniences, utilities, and confinement — are solely responsible for the fact that the difficult spot can be occupied.” 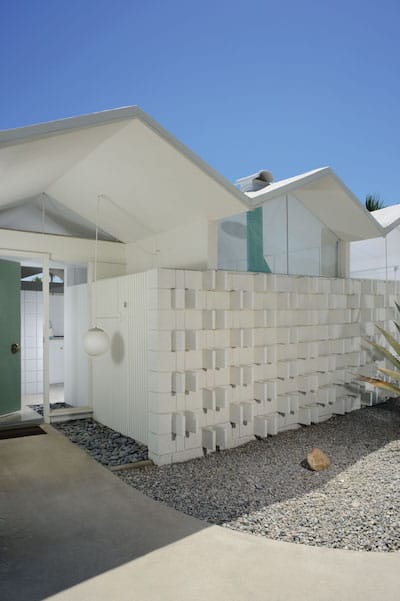 PHOTOGRAPH BY DAN CHAVKIN
The folded-plate roofs on Park Imperial South in Palm Springs — designed by Berry Berkus in 1960 — add flair both inside and out.

Moving the earth for their clients, architects of desert homes, especially on the slopes and alluvial plains of surrounding mountainsides, had two choices for dealing with large boulders: move them or incorporate them into their designs. Mother Nature’s architecture joins the manmade in profile status. Indeed, John Lautner with his Elrod House and Albert Frey with his own home incorporated boulders into their structures. “It would have been terrible to cut this rock down,” Frey said in a 1998 interview for The New York Times. “Its gray granite probably took thousands of years to make this color.”

On top of it all

Steep roofs would be impractical and look ridiculous on horizontally massed houses.
The lack of snow and ice accumulation weighing heavy on homes freed midcentury modern architects to flatten rooflines out or turn them upside down — literally, as William Krisel did with the butterfly roof, and metaphorically, as Donald Wexler did with his folded-plate form in steel. Additionally, they tucked clerestory windows under deep eaves to give the blue sky its due even from interior spaces.

Emboldened by the midcentury’s break-the-rules ethos, architects expanded upon the practicality of concrete-block construction through the creation of patterns, be it via staggered setting or raised fronts so that facets would cast shadows. Taking the concept further, they added “screens” of concrete block with decorative cutouts that radiated whimsical aesthetics while combining privacy with the desert’s bespoke openness. 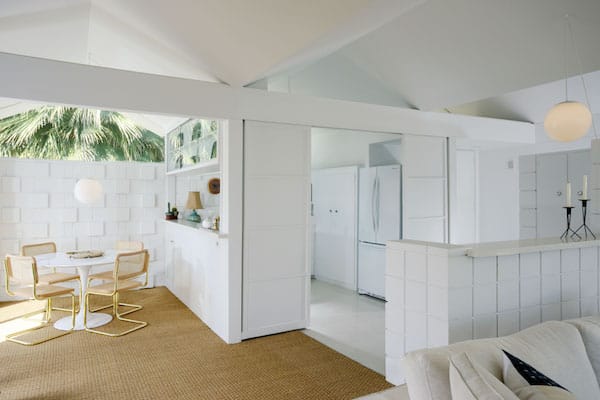 PHOTOGRAPH BY DAN CHAVKIN
Ornamentation came via projected and raised-front solid forms, but most often in “breeze blocks” that offered pattern as well as blocking sun and simultaneously allowing airflow. Concrete blocks also were used in interiors.

If you’ve ever left or arrived in Palm Springs by air, you probably noticed aqua dots across the landscape. Most residential properties in this region, where lounging in the sun is a year-round pastime, feature swimming pools. And we do mean feature. You don’t need Frank Sinatra’s Movie Colony piano-shaped pool to make a statement. The point is that, as Neutra wrote in 1947, “The lay-out [of a house] must articulate the outdoor spaces immediately adjacent to rooms, … and pool and planting can be no afterthought in this manmade oasis.”

The green, green grass of home

Though pools easily fit onto home lots, golf courses need considerably more space. Walter and Leonore Annenberg could have such a private playground on their Rancho Mirage property. But most of the sport’s partakers rely on sharing 18 holes with people who are not necessarily houseguests. Fairway homes attract even non-golfers who want to gaze across a sea of green from their windows or patio. Gated communities have proven so important to the desert milieu that William Cody put his signature on clubhouses for Tamarisk, Thunderbird, and Eldorado country clubs. 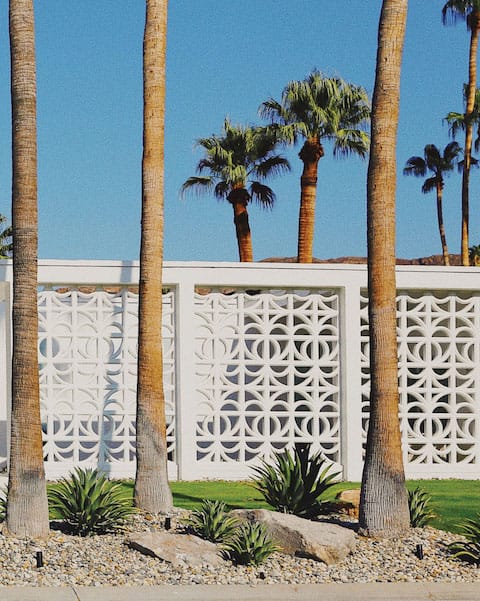 PHOTOGRAPH BY TAYLOR SIMPSON
The approach to using basic materials led to one of the building blocks of midcentury style: concrete.

Many desert residents express their dedication to midcentury modernism by filling their homes with vintage furnishings. Not everyone chooses to time travel on a daily basis, but there’s one principle that desert homeowners seem to instinctively grasp, whether they live in a house built in 1950 or 50 years later: Architectural integrity spills indoors, so décor must “play well” in the spaces it defines and which define it. Sofas and chairs support more than derrieres. Table settings elevate rooms as much as they do meals. And appointments are not merely calendar entries.

• READ NEXT: Three Designers Shape Fashion in the Coachella Valley.