Richard Williams is chomping at the bit.

Covid has wreaked havoc on Kansas’ touring schedule, seemingly tagging at least one or two band or crew members to force the whole tour to come to a screeching halt. However, their west coast tour, which includes a stop at Fantasy Springs Resort Casino on Sept. 9, looks to be back on course.

“I'm just dying to get out there and start playing again,” says Williams. Kansas is alternating its tour between the “Classics” edition (which fans will see in Indio) and the “Point of No Return” album, which was released in 1977.

At 72 and more than five decades with the same band, Williams has never lost his appetite. He’s no geezer. He’s a rocker. Williams figured out long ago that this was his destiny, recognizing “I've got the greatest job in the world. I know that and I don't forget it.”

VIDEO: Kansas plays “The Wall” from the album, Leftoverture.

And yet when he steps on stage, it’s like the teen who used to hang out at a music shop in downtown Topeka, Kansas, is still very much in him.

“Doing what I do, I've always felt this is where I should be,” Williams says. “And I don't know why that being said, but I'm a reluctant rock musician. I've never been comfortable with it. I've never gotten over the pregame jitters, especially when we have a few weeks off. And then you're going back in. Then jumping back on the horse, a few days before is a little bit scary for me, but I know that fear only exists between my ears.

“As soon as we hit the stage, and one, two, three, go, adrenaline kicks in and the material we play is pretty difficult and we're not virtuosos,” Williams adds. “So, you are just constantly keeping up with everybody else. And they're all keeping up with you. And it creates a tension that really demands all your attention. And you forget about all that because you're just doing everything you can to do it correctly. In short order, the jitters are gone and it’s like you jumped on the back of a thoroughbred pony and you're off and running. You're just holding on for your life and then it's over. It's like, ‘Oh God, that was awesome.’”

Williams chats further with Palm Springs Life about his musical roots and how he chose the guitar, how Kansas has survived over the years, and what has been the best part of staying. 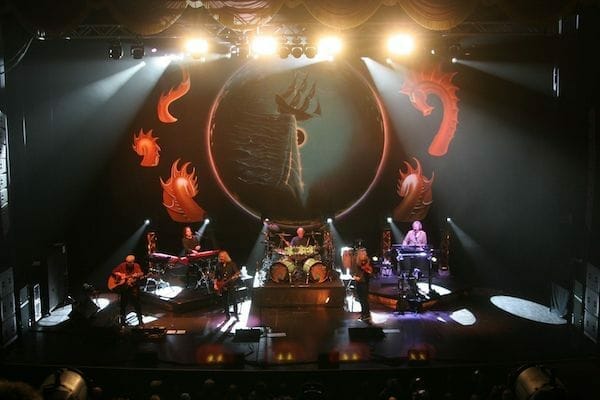 Was playing an instrument something that was innate to being in your family or just something you picked up on your own?

Not at all. There was nothing about our family that was musical. A product of the times. The family always watched The Ed Sullivan Show. Here comes The Beatles. The fuse had already been lit, but that ignited the bomb. Me and every guy I knew in our age group were all in garage bands.

There were more garage bands in Topeka, Kansas, per capita than anywhere on earth. I wanted to play a trumpet in like third grade. I'm so glad the music teacher told me I didn’t have the right teeth for it. At the time they said, “You'll never be able to play this.” So, I didn't get a trumpet. Thank God.

In the background of choosing an instrument, what was going on in your head?

There were these roving soul bands like 10-piece bands with a Hammond organ, brass, guitar, bass, drums, singer. They were all dressed in matching suits and doing steps. They were playing all the soul songs of the day. They were traveling all over the Midwest, very famous regionally. There was a block party near my house one summer. I remember I was lying in bed and had the windows open to cool the room off, and I could hear it was “Land of 1000 Dances.” I could hear it coming from this patio party. There was something about that moment that was the initial lighting the fuse.

I didn't know what was going on. But I knew that I heard the calling. It was like the little boy going to the circus and never went home. I was built to do this before I even got an instrument and not just for fame, fortune, or for the chicks, for whatever it was, none of that. It was just to be a part of this life — the good, the bad, and the ugly. I was a piece of a puzzle that fit perfectly into that, for whatever reason. And so then again, watching The Beatles, there was the guitarist. That’s a cool looking instrument. I want one of those. Bass didn't intrigue me. I didn't want to be a drummer.

Who were early influences on the guitar for you?

At that time, of course, George Harrison of The Beatles, was a big influence, but his early stuff was in a Chet Atkins style and way over my head. I was more into The Yardbirds, which was a little easier at the time to conquer. Of course, in The Yardbirds you had Jeff Beck, Jimmy Page, and Eric Clapton. Like the holy trinity of guitar players for the era.

VIDEO: Sneak peek as Kansas performs The Absence of Presence.

When did you hook up with drummer Phil Erhart? I’m sure you never thought the two of you would turn out to be the only remaining original members of Kansas.

He was a skinny kid with long bangs, drumsticks in his back pocket. I had never seen this guy before, but then I heard “that's Phil Ehart, he plays drums for The Chase and man, he's really good.” So hearing this stuff, we met there. And even at that time, it was not just a novelty. We really wanted to be in a band. I'd been working with a friend of mine who was almost a concert trombonist. But he could read music and he was a really good bass player. So I was learning more from him because he also could play acoustic guitar and he lived right over the music store. So we needed a singer. We found this other guy had a Lowrey organ in his living room. We just needed a drummer. And that's when I ran into Phil.

Despite the changes that Kansas has gone through — people coming and going over the years — has the band stayed true to its sound?

Yes, especially the last two studio albums, The Prelude Implicit (2016) and The Absence of Presence (2020). It really wasn't until Kerry Livgren and Steve Walsh, our main writers, both left. We had begun turning into a jukebox version of ourselves, and that was frustrating for all of us because we really enjoyed the creative process.

But when Steve retired, we thought, you know what? We can make a record. We don't know who's going to write it, how it's going to happen. But suddenly the only thing in our way is ourselves. We can't blame anybody because now there are no restrictions, nobody's saying no. And so we went about it and we went down to Florida, a little resort area, for two weeks. And just locked the doors and got in one of the rooms there and just started writing material.

And started finding that maybe we can do this without those guys. And it kept going and going. Then meanwhile, we started to work with an engineer that we knew, Zak Rizvi, and we knew he was very musical. We wanted him involved at the beginning of the process. We had no idea what a songwriter he was. He wasn't a lyricist, but all of a sudden we said this guy is very Livgren-esque in his writing styles and his solo projects and stuff.

It's like my God with us playing underneath this, this is Kansas stuff. That's what we did with those two projects. They just took on a life of their own and those are as Kansas of albums as anything we've ever done, and better than a lot of them. And so, we know how to be us. Now we're 50 years in, and if there's one thing that we know how to do is to hear a song and say yes or no, or wow, there're possibilities here.

“I grew up where, when you say you're going to do something and you set a goal and you commit to it, you follow through. That is my normal. And so following the next logical step with Kansas, I'm not a quitter. I don't know how to quit. It's just not in my nature.”

When you perform a solo, like if it's a riff or you're just going off on something in the middle of a song, is it actually something you've thought about prior to, this is what I'm going to play, or you're just totally winging it and whatever comes out, comes out.

Well, it's a combination of all three possibilities. There are certain things, that, let's say at the beginning of “The Wall,” it's more musical, more lyrical. I stick to that, not exactly note for note, but the general feel of it. There’s a tone to it. There are other things that I will always touch on that I will improvise around. And then there are other parts where I don't really want to write out a part that I just repeat every night. It’s just here it comes and I try not to think about it, and I don't know what’s going to happen. Sometimes I'll stretch out a little bit more sometimes I'll make myself pull it back and play with your head. Think about things and just listen to what's going on around you and listen to the possibilities. Other times, it's just like fuck it. And so I don't know sometimes what I'm going to do.

At any point when the band was when you were going through changes, people coming, going, were you ever at a point yourself where you said, ‘I'm done with this, I need to either do something on my own or take Phil with me and we go do something.’

I never thought that the world was waiting for my solo album. And I've watched others do it, and they've had them and I weigh the lack of success of that compared to the success of the unit. Why would you want to do this? Well, people have their reasons. And that's fine, you go do that. But, we grew up in the Midwest. My dad was a sergeant in the Army. He met my mother in England during (World War II) and they were married. My sister was born there. He came back to his job that he had before, working for Baker truck rental bought by Ryder. And he was in management with Ryder truck rental. He worked his whole life with them, retired, and married to the same woman his whole life.

I grew up where, when you say you're going to do something and you set a goal and you commit to it, you follow through. That is my normal. And so following the next logical step with Kansas, I'm not a quitter. I don't know how to quit. It's just not in my nature. As things have evolved, you hate to see people leave, but after a while it's inevitable and it's usually for the best, there's a good reason why they're leaving.