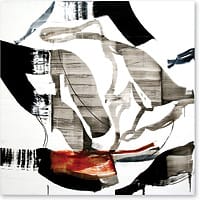 Ricardo Mazal, a Mexican abstract painter living in New York and Santa Fe, took an archaeologist’s approach to reconnect with his heritage and produce the compelling paintings that appear at Buschlen Mowatt Galleries in Palm Desert.

The 1994 discovery of the pre-Columbian La Tumba de la Reina Roja (Tomb of the Red Queen) in an ancient temple in Palenque, Mexico, inspired Mazal’s research into the legendary site. His readings and interviews with archaeologists prepared him for his visit in 2003, when he photographed three areas of pre-Columbian culture and spirituality: the jungle, the massive stone pyramids, and the tomb.

Mazal emerged with hundreds of photographs, which he manipulates through digital technology and copies freehand onto canvases. In a fusion of digital photography and raw, painterly expressionism, he ushers reality into abstraction through quick, horizontal and vertical pulls of long foam rubber blades loaded with paint. He then wipes away with a dry blade, leaving a trail of infused pigment and a picture that ultimately suggests the movement of time and gives the paintings a transcendent quality.

Mazal’s obsession with the lost culture fuels his daring-but-calculated risks, which keep him on the cutting edge of contemporary art and of increasing interest to a cross section of collectors.

Many of the Reina Roja works appeared in exhibitions at the Center of Contemporary Art in Santa Fe, N.M., and the prestigious National Museum of Anthropology in Mexico City, in 2004 and 2005, respectively.

The Tomb of the Red Queen: Ricardo Mazal also was exhibited at Scottsdale Museum of Contemporary Art (www.smoca.org) in Arizona.

This article was originally published March, 2006 and updated for the web June, 2007.