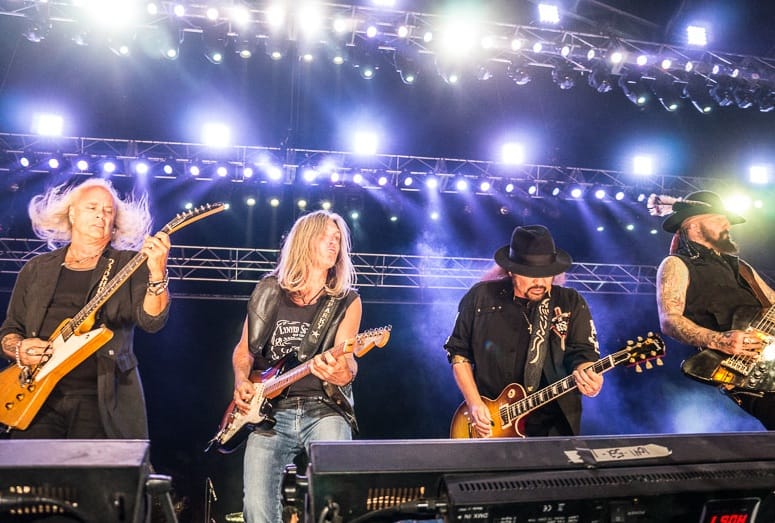 Inducted into the Rock and Roll Hall of Fame in 2005, this band has outlasted more trials and tribulations than any other band left standing.

Rickey Medlocke has been a part of it all.

He grew up in Florida with the guys that were to become a legendary country rock band. In the early 1970’s, Medlocke joined Lynyrd Skynyrd as a second drummer. After a few years he departed and began his own southern rock group, Blackfoot, but remained close friends with Skynyrd as the years passed.

In 1977, a horrible plane crashed killed lead singer Ronnie Van Zandt and two other band members. Others were severely wounded. The band ended that day, or so everyone thought.

In 1987, remaining members of Lynyrd Skynyrd decided to carry on with Johnny Van Zant, Ronnie’s younger brother, taking over as lead vocalist. By1995, Medlocke re-joined the Lynyrd Skynyrd group in Atlanta for the movie premiere of Freebird, and was part of an All-Star jam at The Fox Theater the night before.

Now after 18 consecutive years, and almost 22 being part of Lynyrd Skynyrd, Medlocke has seen it all and is “grateful and blessed” for still being part of “musical history”.

Medlocke (pictured at right) took a minute to speak with Palm Springs Life while appearing at Stagecoach Music Festival recently. How do you respond to the racial controversy regarding the Confederate flag as part of your logo?
"I think too much importance is placed on that.  I come from a long line of Native Americans. Back not too many years ago, they took land from us and now out of the goodness of your heart, you’ve given us this? You took it out of force. My father’s side is Lakota Sioux Indians, and my mother side is Creek Indians, Cherokee Indians, Scottish and Irish. So I refuse to answer questions about the flag, because it ain’t about racism to the guys. Ronnie Van Zant loved the blues, he loved listening to blues music. My Grandaddy Shorty used to play Mississippi and Delta blues for Ronnie Van Zant, Gary Rossington and Allen Collins when they would come over and sit on our porch. So I wouldn’t know what it is to be racist because I wasn’t raised that way. We should learn to get along and stop all the bickering.”

You were brought back to be a songwriter in addition to playing guitar in the 1990’s?
Yes. I had been a songwriter in my band Blackfoot for many years. Gary (Rossington) and Johnny (Van Zant) had already been a songwriting team. Then when Hughy Thomasson (of The Outlaws) joined, he came in January, right before me, so all four of us have been writing songs. We just finished our sixth record together just about 2 ½ years ago, Last of a Dyin’ Breed. It’s gone real well and we’ve had a lot of success with it. I think when you’re a band that’s been around as long as we have, it’s a great thing to be a part of history. I’ve been a part of that, I feel very fortunate and blessed to be a part of rock music history.”

What do you think of the changing music scene?
“Even though a lot of people in radio and TV say [rock is] dead, I’m glad to be a part of something that’s like AC/DC, The Rolling Stones, Aerosmith, and all these classic [rock] groups that are still here and alive, and well. One day there won’t be no more of it. It’s something that won’t always be here.  So [people] should come out and see it while its’ still here. You have a lot of these classic rock musicians that are still alive, like Led Zeppelin, except John Bonham, but I find that to be great.”

Do you have a musical hero?
“I love Keith Richards. He’s one of my all time favorite rock musicians. I think it’s great that Mick Jagger and these guys are doing their thing. I don’t think age has anything to do with it. I just turned 64 and I feel great! I feel really blessed that I’m able to get out and really do this, you know what I mean?” You created the song “Travelin’ Man” in 1997, which is a duet with Ronnie and Johnny Van Zandt (pictured at left). How did you come up with that idea?
“I was coming back from a meeting in New York, where we all were discussing the new album. On the plane home, I was talking to my manager at that time about people who were doing duets with their relatives that had just passed on, like Natalie and Nat King Cole. I wondered if we could take a fill piece of Ronnie singing a song, and all the sudden it hit me, because I had just seen Ronnie in the Freebird movie premiere singing “Travelin’ Man”. I called Johnny and Gary. So we got the old tapes and we re-recorded the song. It went over and [Ronnie] was on record with us. It was great.”

What are Lynyrd Skynrd’s future plans?
“We plan on putting out new material. I think any band’s history, that’s what they have done their whole life. Write new material, and don’t just rely on what you’ve done. I look forward to it. I have a studio and a mix room in my house. I get to produce up and coming bands. I like wearing that hat. I love the prospects of producing younger bands, and I think we need younger rock bands in the world. There’s a new band out there called Blackfoot II now.”

Who is your favorite band out there today?
“I’m a huge Chris Cornell fan, and I was really excited to see Soundgarden come back. I think in the modern world, he is the greatest rock singer going right now. So for me, he’s a great songwriter, I love what he’s done on his own, I love what he’s done with Audioslave. I would listen to anything of his.”