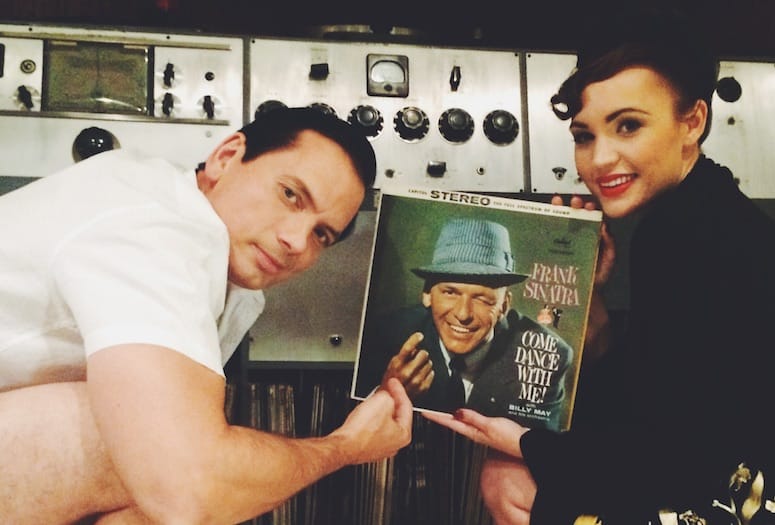 If Rico Simonini were to be cast as a doctor, he would be lying if he says he doesn’t play one in real life.

He does. And he also acts. The two forces in his life seriously began to cross paths when he brought his medical practice to Los Angeles nearly 20 years ago, culminating with Simonini taking the Willard Manus play version of Frank & Ava, writing the screenplay, and starring in the lead role as Frank Sinatra in the 2018 film.

Sinatra would have turned 105 on Dec. 12, and there is much about the man that continues to intrigue audiences especially in Greater Palm Springs where he lived for nearly half his life before passing in 1998. The film focuses on a critical three-year period in Sinatra’s life when he meets and eventually marries Ava Gardner while trying to convince Hollywood bigwigs to take him seriously as an actor at a time when his meteoric singing career was on its way down.

The role brought Simonini full circle beginning with meeting Ole’ Blue Eyes when he was just 6 years old to growing up in Brooklyn with a father whose physicality and mannerisms were a reflection of the same wise-guy DNA as Sinatra. Simonini talks with Palm Springs Life about his dual careers and the film, which is available for streaming on Prime Video and iTunes.

How did you meet playwright Willard Manus that eventually led to the role of Frank Sinatra in the play version of Frank & Ava?

One of my patients always pulled me into doing theater, plays, and movie roles. There was a play that Willard was doing calling Berlin Cowboys. One of the lead characters was a guy who had to speak Greek and Russian. Willard was rehearsing and having problems with the lead actor, creative differences or whatever. 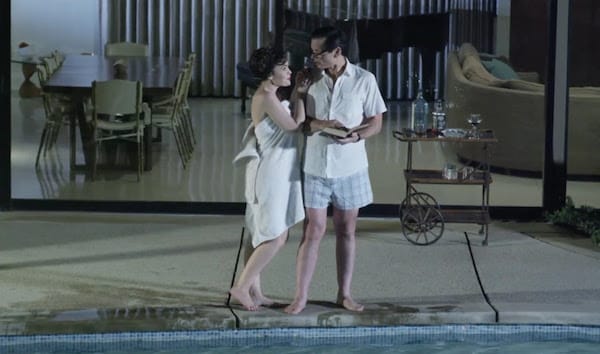 The crew shot multiple scenes for the film at the Frank Sinatra Twin Palms estate in Palm Springs. "We shot from 6 a.m. until midnight because we only had the house for one day."

He said to a patient of mine, who has directed lots of movies and TV shows, that he would like to replace the guy. He says, "Who am I going to find that's going to work as a spy and speak Russian and Greek and be ready in three weeks?" My patient says, "My doctor."

I came in and had the audition and I stepped into the role. I became Costas, the Greek spy who fell in love with a German diva. That's how Willard came to know me and I became a hero for him. Whenever he would get a play, he'd always call me to come read for it.

You read for Frank & Ava at Actors Studio West. How did that pan out?

We read just the first act at the Actor's Studio and basically it dealt with their relationship, their fights, their wars, his infidelities, etc... Basically you do a reading and everybody chimes in. They all raise their hands and make comments with notes. Of course, Mark Rydell, Tony Randall, and Ellen Burstyn are there. Ellen says, "I don't understand this play. You wrote a play about two people that drink, fight, and fuck all the time. Who'd want to watch this?" Martin Landau says, "Obviously you haven't been watching the right movies." Hence, the play was born. We played in this local little bar called The Three of Clubs on Vine Street. It was the kind of place that Frank would have played in.

What convinced you to take the play to film?

For me, my father was the spine and the character of Sinatra. When people ask me about my influence in how to play Sinatra, they all said to me, "Well, how do you play an iconic guy like Frank Sinatra? What's your preparation?" I said, "I'm not playing an iconic guy. I'm playing an Italian guy from New York who had blue eyes, was 5-foot-9, chased women and hung around mob guys and had a great voice. So if my father could sing, he'd be Sinatra." That was my father. My father was a knock around guy, 5-9, blue eyes. Everybody loved him. He was a guy of principles. He'd give the shirt off his back, though it may be somebody else's shirt, but he was that kind of guy. My dad got sick in 2014. He never had a chance to see the play. So in the film there's a dedication to him.

READ NEXT: Experience the Outdoor Sculpture Garden on El Paseo in Palm Desert.

Was there ever a point in making the film where you thought the challenges were too much.

Every few weeks I felt that because the challenges were in the places I didn't expect them. You think you write a script, you get a bunch of actors, you find a location, you find the wardrobe, you get a deal. You've got things lined up and you think that's all you need, but then you've got to deal with egos. 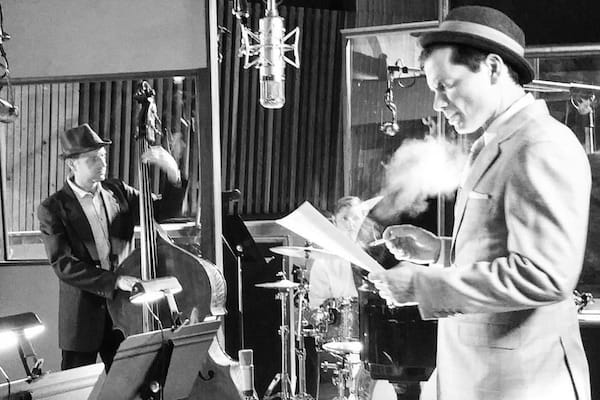 Rico Simonini incorporated his father into shaping his interpretation of Frank Sinatra.

Then you have people saying, "Well, I can't work this way with that person. They have to wait for me. I have to go first, I have to go second." Some of these things really threw me off. Because I was trying to do things low budget and guys giving me deals and favors, some guys will put in half a job literally. I saw this as a love story and as a comeback story but my director saw this as Days of Wine and Roses about two alcoholics stuck in their own self-indulgent, self-destructive path. I said, "Well, that's too dark. That's not the movie I'm going for here." We had to try to find a happy medium." A lot of it was learning how to navigate all that.

How were you able to shoot at the Sinatra house in Palm Springs? What other scenes did you shoot here?

The Sinatra house was prohibitively expensive when we first called. So I asked when it was available and they said it was available very weekend except the first weekend in December because that's the weekend they do landscaping and scope the trees and the lawns.
I said, "Well, I want it that weekend." They go, "Well, we just told you, there are going to be a bunch of people around," "Yeah, I'll deal with them." 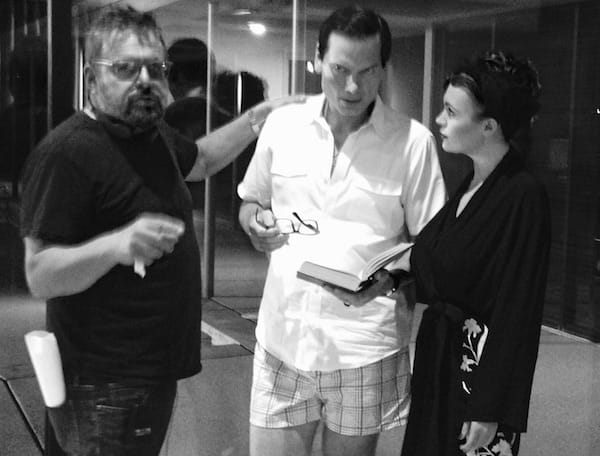 We negotiated for a really low deal. I needed the pool to be heated because I wanted her (Emily Low) to be swimming in the pool naked. It was December in Palm Springs, so I paid an extra $500 bucks for them to heat the pool. We had the house for one day and we shot five setups and 16 pages in one day. We started at 6 a.m. and we were there until midnight. We didn't have the luxury of two or three takes because we were running out of time. All the fight scenes that happened in the bedroom were all one-take wonders. We were so, I guess, strung out from working all day that that played out in the scene. We were exhausted and frustrated and tired but we were fighting. That's the perfect way to be fighting. We also shot driving on the road shooting off guns and stuff out there too. Nobody responded to the return of the gunfire fortunately. It was fun. That was a fun day. We had an old police car and a convertible.

You were only 6, but what do you remember about meeting Sinatra?

One place we went to was the Westchester Community Theater and Frank would do engagements there. Somebody performs there every year for all the wise guy people. My father used to get a kick out of telling his wise guy friends what I wanted to do when I grew up, "Hey, I want to be a doctor." We'd go backstage and there's Frank and my father says, "Hey, Frank, here's my kid," and he goes, "Hey, tell Frank what you want to be when you grow up." I said, "I want to be a doctor." Frank looks at me with his blue eyes says, "Kid, whatever you do, don't turn out like your old man," and he put a C-note in my pocket

How did you know at that age that you wanted to be a doctor?

I was the science nerd. I had two escapes as a kid; one watching old movies with my mom late night waiting for my dad to come home. The other escape was the public library, which was right down the street. We couldn't afford encyclopedias and books. I would use the public library as an escape. I remember there was a book there called, Your Heart and How It Works. It was like a cartoon book. I remember there was a guy standing on the Earth with his arteries coming out of his chest and circling the moon and back and it said, "If you were to take all the arteries of your body and run them end to end, they would go to the moon and back three times." I said, "Wow, this is pretty amazing. I want to learn about this."

Was there ever a point where you thought, "Maybe I'm not good enough to act. Maybe I should just be a doctor,"? When did you discover, "Hey, I can do this."?

There were two plays — A Few Good Men and Glengarry Glen Ross.   I remember when I first started by taking acting classes, A Few Good Men was a lot of dialogue and a lot of quick pacing. It just seemed daunting. 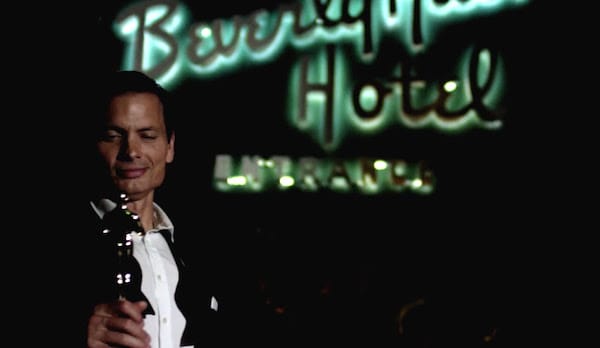 This was four or five years into it, I played the role of Daniel Kaffee (played by Tom Cruise in the film). People that came to see the play, they actually said, "You showed a nice arc. At the beginning you were this smart aleck guy who is trying to get away with things, and then as the play went on, we just saw you take a different meaning and we saw you grow up on stage."

How do you handle splitting your time between the two?

The only way it would ever become challenging would be if I became a series regular on a TV show. That hasn't happened, because usually most gigs are a week here, a week there and if I do theater, it's nights and weekends.

Are you surprised to have achieved the career goal you had as a child to become a doctor and add acting as well?

I think it's about putting your mind to something and being determined. The thing I always find sometimes frustrating is because a lot of people in this town, they see people as one thing or another. It's having people see that you can do many things, but I think in Hollywood, a lot of people pigeonhole you and they see you as doing one thing or another. It's like, "Oh yeah, you should do a doctor show," or, "You should play a doctor," that kind of thing.

I'm not surprised I did what I did, but definitely, like everything else, I had to find out on my own how to do it. There wasn't a mentorship, so to speak. I always make the joke that I became friends with every B actor in town and I learned how to make things happen with them. I do know some A listers, but A listers are busy doing big projects. Then they look at me like, "Wow, you did a movie."