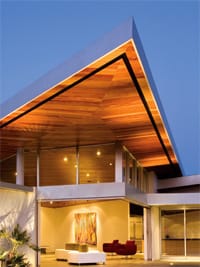 Stand in the yard of this home and you’ll have views looking both ways: the mountains in one direction, and a custom dream home in the other.

Brian Buchan and Jaime Rook never shopped for their dream home. Instead, they chose a piece of land that showcased the mountains on which they could build it. With Buchan’s architectural background and work as a general contractor, and Rook’s background in commercial real estate, they easily found the right lot in central Palm Springs, bought the property, bulldozed the home, and started sketching. Before a celebratory toast in the 5,600-square-foot home, Buchan and Rook spent a year finalizing details — from the front entertaining kitchen and back prep kitchen to the bathroom with a glass wall that slides open to reveal a small garden. There’s even a custom window set low under the fireplace where their dog, Milo, can enjoy views at his level. Designer Mark Nichols assisted with the floor plan and designer Christopher Kennedy helped choose the fabrics and furniture. “It was thrilling to work with such visionary clients,” Kennedy says. “They knew exactly the mood they wanted — exuberant and modern — and together we custom-designed nearly all the pieces for the home.” The homeowners can’t help but admire the results of a year well spent, as they stand under the swath of Brazilian santos mahogany that stretches from the living room into a point that almost reaches the pool. “It’s absolutely better than we pictured,” says Buchan, noting that the home’s views are maximized by its shocking construction of 53 percent glass. “Frey used an angle like this on the Tramway gas station, but not on a home.” Buchan took inspiration from local greats, combined his and Rook’s own ideas, and brought the dream to life. Up next: two spec homes employing some similar elements just a few blocks away.