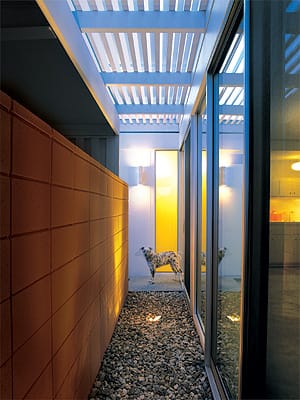 Bridget loves to have her picture taken. No one asked her to pose for this photo; she saw the cameraman and trotted along the concrete walkway to peer down the light well between the carport and the glasswalled studio. This rescue dog’s photogenic nature may stem from the fact that her house (a 1962 prefabricated Donald Wexler steel home), her owner (artist Jim Isermann), and her owner’s work (including a recently completed wall installation for Palm Springs Art Museum) have all spent some good time in front of the lens.

Isermann describes Bridget as the most amazing dog he’s ever had. He and his partner taught her to understand sign language after they learned she is deaf. That put her at an advantage when the construction crews came in. In 2002, Isermann decided to build a working artist’s studio on the same modular system as the house, hiring architect Ana Escalante for the job when Wexler was too busy. Escalante estimated the project would take her a weekend; she finished six months later. "I ended up being really intrigued by the original architecture," she says. Not to mention the challenge that the home is a Class I historic site: its steel structure cannot be altered in any way. Here, the two structures appear connected, but Isermann and Escalante know the buildings’ secret: the overhang from the studio floats one inch above the carport. The look is cohesive, though the two never touch and the original steel frame remains intact. Even the unused space between them is something to admire, especially with Bridget peeking out to investigate.