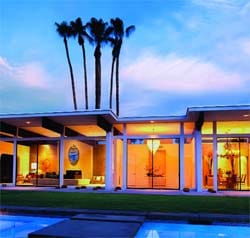 The house was awful, says Bryan Graybill, who owns this 1968 home with his partner Moises Esquenazi. Claiming a grand 6,000 square feet on two and a half lots, the house should have been enjoying west-facing views of the mountains. Instead, the yard was a tangled mess of unkempt hedges, shrubs, and olive trees and a mass of bougainvillea slowly creeping up the house. What’s more, a tennis court crowded against the home mere feet from the edge of its eaves, enclosed in a mesh fence heavy with vines. What Graybill saw as ugly and hopeless, Esquenazi — an interior designer — saw as brimming with potential. “There was this hidden jewel but its post-and-beam architecture and its view were totally covered up,” he says.

They purchased the house in 2004 and set to work clearing out the overgrown brush, giving the home a new paint job, and adding a pool that Esquenazi designed to follow the lines of the house. “The more we took out, the more this amazing architecture started glowing,” says Graybill. “The house became more interesting and something we wanted to showcase both inside and out.” Between taking on other design projects in the area, Esquenazi worked on his own home, using lighting that would show off its best features.

Now, the couple enjoys the unobstructed view with a constant stream of friends. “We do a ton of entertaining; we seem to be the default hosts whenever there’s a get-together,” Graybill says. The dramatic pool with 12-person spa is certainly an attraction, as is the outdoor movie theater for projecting favorite flicks. Or maybe it’s just that expanse of open sky, especially as the sun goes down. “The house looks very different from day to night,” Esquenazi says. “At dusk, there is some pink in the sky and that view of the mountains, but you can still see and appreciate the architecture of the house. It’s just really beautiful.”