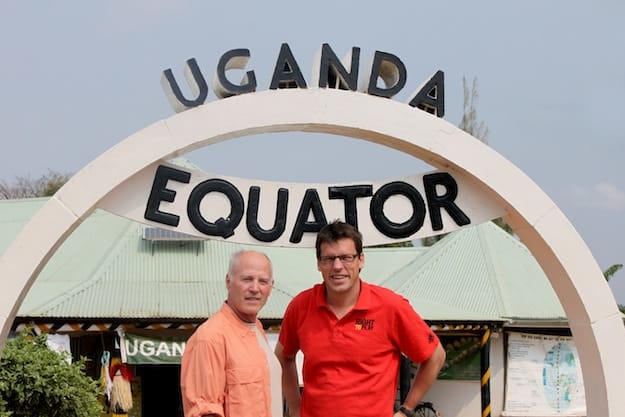 He has produced movies like “The Color Purple”, “The Curious Case of Benjamin Button”, “Seabiscuit” and “Raiders of the Lost Ark”.

With such a stacked list of credits, you might expect Marshall to be less than enthused about directing a documentary. Quite the contrary.

“I think documentaries are a great art form since they are so full of surprises when you make them. My day job is doing these scripted programs or stories, and I like to dabble in the ones that are not scripted,” said Marshall, who spoke from New York this week while finishing up production on a CBS pilot, “The Ordained”, starring Charlie Cox, Hope Davis and Sam Neil.

In undertaking the two-year project of “Right to Play”, Marshall found his surprise in the form of former Olympic speed skating champion Eric Heiden, who won five Olympic gold medals at Lake Placid in 1980 – probably overshadowed somewhat by the USA win in hockey over Russia.

Heiden became the thread which runs through the 41-minute documentary that focuses on the creator of Right to Play, Johan Olav Koss, a three-time Olympic speed skating gold medalist in the 1994 Olympics. Right to Play brings sports to impoverished and war-torn areas of the world, giving children a chance to discover the joy in playing and the life lessons it provides. Since it’s inception in 2000, Right to Play now impacts 1 million children daily in 23 countries, according to its website.

The film will screen at 2 p.m. Saturday (April 6) at Camelot Theatres in Palm Springs as part of the four-day American Documentary Film Festival (April 4-8).

Marshall, who was just in Thermal last month to watch his daughter compete in an equestrian competition, took time out to talk about “Right to Play”.

How did you find out about the connection between Eric Heiden and Johan?
“I had no idea until Johan told his story that Eric was his sort of idol. I started putting it together, so maybe it would be a good idea to go talk to Eric, and his interview was fantastic. When you find something like that, you run with the ball. Eric was one of those.”

How else did this connection add to the film?
“Eric was one of the commentators in all three of Johan’s races at the 1994 Olympics. And then, when we went to interview him, it was this perfect tread throughout the movie. We found a shot of Eric talking about Johan at the Olympics, which led us into his interview. It was like a gift from heaven; it was an amazing coincidence. They both went on to be doctors –  (Johan chose not to pursue being a doctor in preference to founding Right to Play). They kind of had these same parallel paths.”

How did your connection to Johan start, and eventually lead to the film?
“My connection to him started in 1994 when I saw him race at the 1994 Winter Games in Norway. I was on the board of the U.S. Olympic Committee. When ESPN Films asked me to do one of their “30 for 30” documentaries, what they wanted was a connection between the filmmaker and the subject they were doing. I had remembered that Johan had not only done an incredible job in his racing, but he had begun this philanthropic organization, which was called Olympic Aid. And he moved it forward and called it Right to Play. I saw a really positive subject for my doc as opposed to the darker stories that are sometimes told in the sporting world.”

Why was it important for you to do this film?
“For me, it was an opportunity to combine my two passions, Olympic sports and filmmaking. But also, I think it’s incredible that one man can make a difference. This is his story. What Johan has done is taken all of the attributes and skills that made him a great Olympian and applied them into creating this organization that has a simple belief that every child has a right to play. It seems like the basic of notions, when we go to these war-torn countries, we think of food and water, but you have to think of the development, the personality and the lives of these kids beyond just feeding and clothing them. They need to have exercise, and what Johan has done is combine that basic need for exercise with life skills, health issues and conflict resolution. He’s trying to create the leaders for the future and bring peaceful times to all of these different territories.”

You’ve worked on some prolific films and projects in your life. Did “Right to Play” touch you differently in some way?
“It really did. Being in those tents with 400 refugees (in Uganda) who had lived in the tent for six months and to see the joy and happiness in their faces when they get a soccer ball, it’s pretty powerful. I’m really proud of this film; it’s some of my best work. I’m glad it’s making a positive impact around the world, particularly for Right to Play because it’s a terrific organization.”

What didn’t the film show?
“There was a real struggle for Johan to start this organization. He had a lot of push back from the International Olympic Committee (IOC) because it kind of became bigger than what the Olympics are all about. That was fine for the organization, but not for the IOC, so that’s why the name change came about (Right to Play), and eventually Johan felt in order to expand it, he needed to make it a separate organization. There were a lot of internal conversations and hurdles along the way that I hadn’t anticipated because it’s such a wonderful idea. Politics always gets in the way, and that’s a whole other movie. I decided I was going to leave that over here and go tell the positive story.”