Michael Costello poses for photos for family and friends after being honored with a star on the Palm Springs Walk of Stars March 20.
PHOTOS BY ERIN PETERS

The Palm Springs native joked about how he can best leverage his newly crowned status as a living member of the Palm Springs Walk of Stars after being honored March 20 on Palm Canyon Drive just a few doors down from the downtown Starbucks.

Costello, who has made his mark as a fashion designer of the stars like Beyoncé, Lady Gaga, and Jennifer Lopez, and now has two storefronts in the Hollywood area, was honored with Star No. 414 as “Film and Television Fashion Designer.” 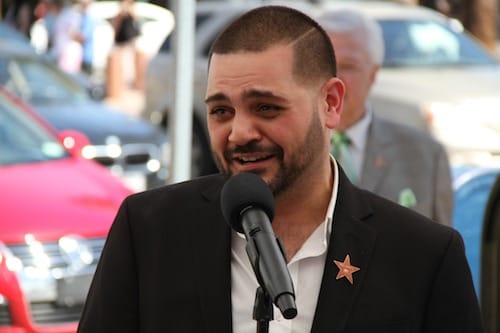 Michael Costello becomes emotional when talking about his parents’ support of his career aspirations. 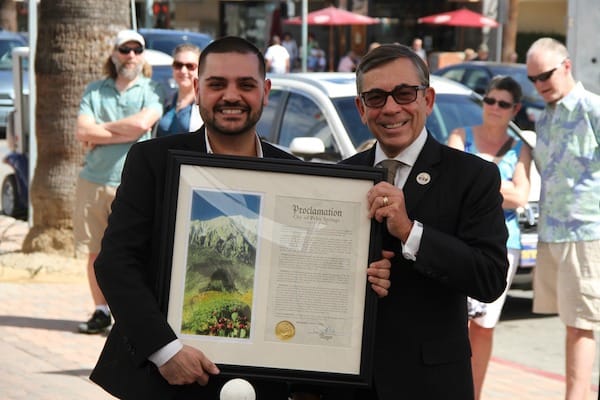 Costello dedicated his star first to his father, who rented the store space that put the young designer on his path to stardom. Tears welled in his eyes as he later dedicated his star to his parents, who have supported his endeavors the whole way.

He also thanked Stein, who has curated and produced Fashion Week El Paseo since its inception 12 years ago. Costello has become a mainstay of Fashion Week, which hits the runway tonight (March 21) as part of the Project Runway show, which has become one of the most popular nights of the eight consecutive in Palm Desert.

“Susan Stein, our history and just our relationship, it’s so wonderful,” Costello said. “I’m so thankful to know you. I’m thankful for really introducing me and putting me on the map here in Palm Springs for fashion. You really did it.”