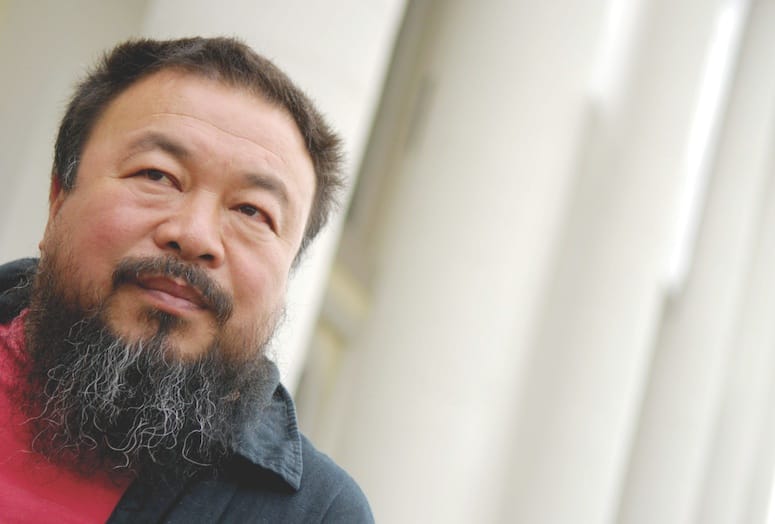 “What is my definition of freedom? It has a lot of levels. When we talk about freedom, it can be really dependent on where you are. For me, I think the most important freedom is to think freely.” — Ai Weiwei: Weiwei-isms (2012)

Even the most elite art world personalities seldom, if ever, see Chinese dissident Ai Weiwei — one of the world’s best-known contemporary artists — outside of social media posts and smuggled videos.

That’s because his bustling Beijing studio is also his prison. Technically free to move around the city, the artist faces intense surveillance each step he takes outside his door, and the Chinese government periodically detains him for his fearless challenges to the suppression of free speech, the hallmark of the Communist regime. Ai gained international notoriety in 2011 during his extended arrest for vague tax-related charges that inspired the global meme #FreeAiWeiwei.

In Circle of Animals/Zodiac Heads: Gold (and its Bronze counterpart), the artist works conceptually and sculpturally to interpret the 12 animal heads known popularly as the traditional Chinese zodiac — a rat, an ox, a tiger, a rabbit, a dragon, a snake, a horse, a sheep, a monkey, a rooster, a dog, and a pig — specifically the elaborate set that once adorned the famed water feature and clock of the Yuanming Yuan. The monumental complex of gardens and palaces northeast of Beijing was ransacked in 1860 by British and French troops, and the heads and other artifacts disappeared or were destroyed.

The originals were designed by Giuseppe Castiglione, an Italian who lived in China and received many commissions from 18th century Qing Dynasty Emperor Qianlong — himself an invading conqueror, the artist reminds us. A Frenchman executed the designs, attenuating the works’ art-historical lineage and reflecting the roots of certain cultural and political sensitivities between the East and the West.

Whether working in sculpture, performance, video, written word, photography, or anything else, Ai asks hard questions about proprietary culture, power, subversion, destruction, and resurgence. In the Zodiac Heads, European influence and dynastic tradition surface in questions about whose traditions were exploited, when, by whom, and to what end. The work went from being a symbol of Western pretense to a casualty of looting, black-market treasure — and a target for repatriation by authorities that once advocated erasing that part of the national character. “Communism destroys the old world to build a new one, and either does not care about or is ignorant of [its] own history,” the artist has said. The troubled provenance of the objects and their symbolic legacy is distinctively Chinese. Circle of Animals/Zodiac Heads is on a global tour that began in New York in May 2011 with successive stops in Berlin, Dallas, Denmark, Great Britain, Montreal, Moscow, San Diego, and Palm Springs. Daniell Cornell, deputy director of art and senior curator at Palm Springs Art Museum, welcomes the chance to show the acclaimed work. “Ai Weiwei’s installation offers a stunning visual encounter and engages with the historical relationship between China and the West,” he says.

The artist has long been in close contact with the U.S. avant-garde, especially the Warhol-centric crowd he ran with in 1980s New York City, before he returned to live in China in 1993. In 1976, Ai went to study art at Sichuan, where the Yuanming Yuan is located, and marveled at the commonplace ruination of this palace, which the locals scavenged for building supplies.

He was inspired to start the Zodiac Heads when two original pieces from the palace — the rat and the rabbit — surfaced at the 2009 Christie’s Paris auction of the Yves Saint-Laurent estate. Ai was ready for the ensuing conversation about disputed artifacts, cultural humiliation, and power struggles. His previous work had included documentation of him breaking a priceless Han Dynasty vase, as well as painting corporate logos on Neolithic ceramics — efforts to highlight the cultural pillaging that still occurs.

The Zodiac Heads continue a conversation about authenticity and value that the artist instigated decades ago, saying, “We never change the subject, but always change the interpretation.”

With several of the original animals still unaccounted for, the artist has relied on conventions of historical styles, extrapolation, and pure imagination for the new Heads. The result, he says, is “something that is a copy of an original, but not an exact copy; something that has its own sensitive layer of languages, and that bears the mark of our own time.”