Pappy and Harriet's Among Best Roadhouses 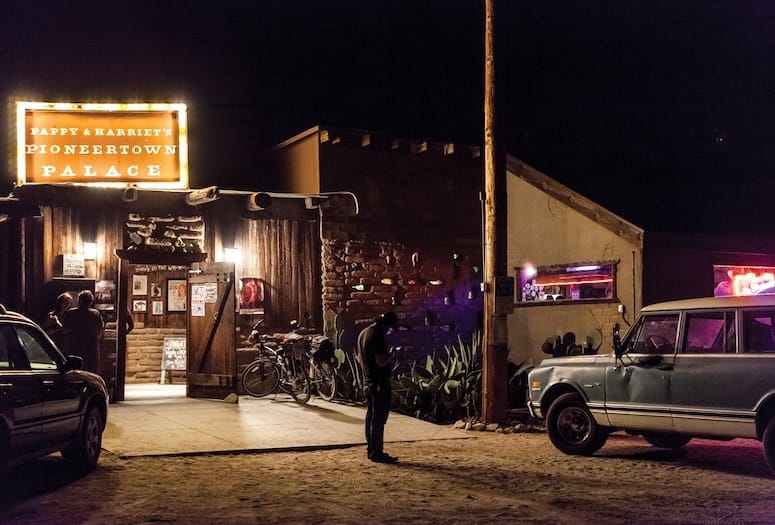 Almost every story of an epic night in the High Desert has one thing in common — a stop at Pappy & Harriet’s.
PHOTOGRAPH BY LISA CORSON

Wine bars are cozy and cocktail bars are a chic delight. But a roadhouse is like slipping on a well-worn glove.

Good roadhouses have all the trappings of a traditional bar. Certainly there’s a bartender, some stools, and an array of taps. But there’s something else — an elusive, indefinable quality that makes this more than just a place to dance, sing, and carouse. A roadhouse offers both a sense of the outside world and a respite from it. It’s a haven for anyone willing to make the journey.

Not too long ago, I drove my friend to Landers Brew Co. for the first time. As my car slipped along the soft dirt of Golden Slipper Lane, the clouds of dust parted, providing a glimpse of the squat, rectangular bar waiting for us at the end of the road.

“Is this real life?” my friend whispered.

Almost every story of an epic night in the High Desert has one thing in common — a stop at Pappy & Harriet’s. It’s the kind of roadhouse where misfits, eccentrics, and travelers are greeted the same as Hollywood celebrities. In recent years the venue has developed a reputation for live music, and an eclectic mix of indie darlings are booked year-round. Paul McCartney played a surprise show following his Desert Trip appearance last year, while Shooter Jennings and Kesha have dropped in for open mic nights. Roll up on your bike, on your horse, in your pickup truck, or in your luxury SUV and start living your next epic story.

If you call this watering hole a “haunt,” you might not be far off. The roadhouse, constructed in 1925 as the Morongo Lodge, was once owned by a man murdered by suspected mobsters  and was named for a man who apparently killed the father of the girl he loved and led police on one of  the largest manhunts in  the history of the West.
Now a venue that welcomes “cowpokes, bandits, settlers, strangers, and friends,” Willie Boy’s is festooned with antiques from the 1800s, a stage fringed in red drapes, and mounted trophy animals on the wall. The draft beer selection is limited, but the pitchers are a bargain, and the food will force you to loosen your belt a notch.

This unassuming building, located on a stretch of Palm Canyon Drive jammed with banks and home furnishings retailers, is 100 percent classic roadhouse on the interior. Wood paneling? Check. Neon beer signs? Check. A bloody mary spicy enough to singe your eyebrows? Double check. You’ll be hard-pressed to find a weekend when the place isn’t flanked by motorcycles, the sound system isn’t thundering, and there’s not at least one guy walking around in a skull bandana. The abundant crowd is an impressive mix of locals and people just passing through. All of them are ready for a great time.

Landers Brew Co. unfolds like a dream — that is, if your dream whisks you down a dirt road, around a curvy gravel driveway, and deposits you into the company of unusual but charming characters. Landers Brew Co. boasts dozens of beers on tap, including regional favorites like the Landers Way IPA and Van Tassel Triple IPA, named for George Van Tassel, an aviator and ufologist who constructed the nearby Integratron dome and held annual spacecraft conventions. There’s a pool table, a couple of dogs on the couch, and usually a band setting up on the postage stamp–size stage.
Dollar bills stapled above the bar are decorated with marker and say things like “Keep Landers weird” and “Weird, but in a good way.” Kind of like the best dreams.

61835 Twentynine Palms Highway, Joshua Tree. 760-366-2250; joshuatreesaloon.com
It’s hard to say what’s the best thing about this saloon — the proximity to Joshua Tree National Park, so you can enjoy a tremendous meal after your outdoor adventures, or the sprawling property nestled under a perfect desert sky. Constructed from an assemblage of corrugated metal and wood, the bar feels like a step back in time. The fish tacos go beyond all expectations or warnings your mom might have issued about eating fish in the desert. Late nights here are worth it, but don’t miss the breakfast either, which begins at 7 a.m. every day of the year. 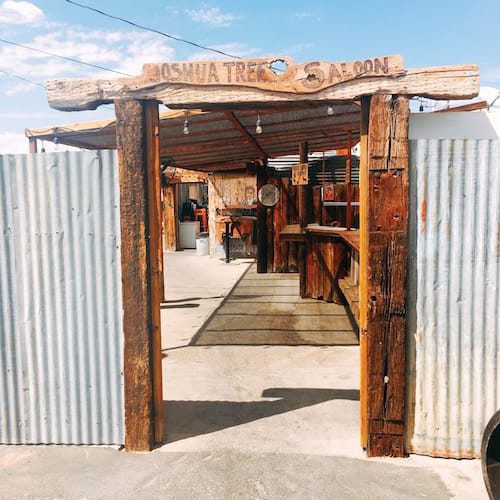 PHOTO BY EMILY CHAVOUS
Joshua Tree Saloon feels like a step back in time.

The Red Barn of  Palm Desert

73290 Highway 111, Palm Desert. 760-346-0191; redbarnpalmdesert.com
The facade resembles, well, a big red barn, so the cool, dim bar inside might come as a surprise. But if you’re looking for a party, you’ve come to the right place. Open 365 days a year, Red Barn offers free bar games, like darts and shuffleboard, a luxury loft available for parties, and one of the best dance floors in the desert. The food is solid too, with a menu that proves anything worth eating can be fried, smoked, or slathered in barbecue sauce.

64647 Dillon Road, Desert Hot Springs. 760-774-7131; dillonsburgersbeers.com
Legend has it that The Doors once played in a former incarnation of Dillon’s. It’s tucked inside one of the oldest buildings in Desert Hot Springs. The beer is ice cold and the live shows are worth checking out. You never know when you’ll be seeing the next Doors.

80956 Highway 111, Indio. 760-347-1522
It’s not often that bars gain legendary status from their karaoke nights, but that’s the case with Neil’s Lounge. The raucous festivities draw all kinds: country crooner Keith Urban once serenaded Nicole Kidman with a few songs here. The KJ is quick, the crowds are always ready to launch into song, and the daily happy hour defies time, stretching 10 hours.

81800 Ave. 51, Indio.  760-347-9985; tackroomtavern.com
If you think you can’t find a roadhouse among a manicured polo pitch, think again. Located at the Empire Polo Club, the Tack Room Tavern is the kind of down-home bar you can pony up to. The stiff pours are nothing to scoff at either. From our experience, the polo field never looks quite as lovely as it does when viewed through the bottom of a highball glass.Remember, if you’re not sitting on one of the saddles, you might as well not be there at all.