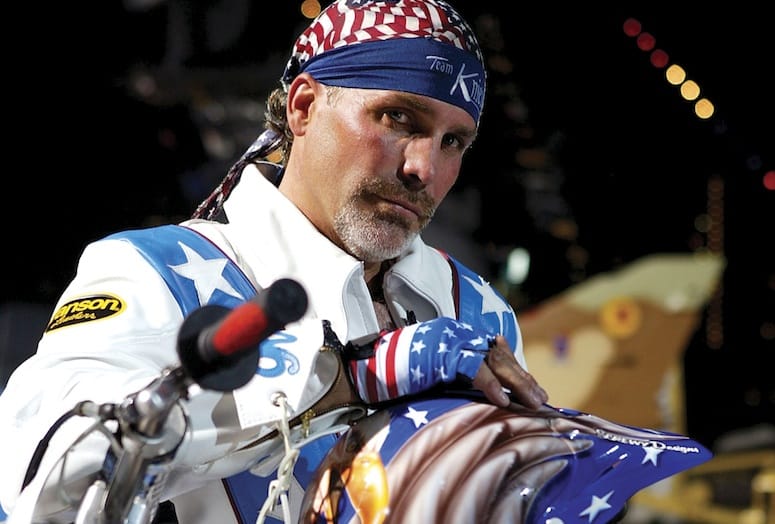 Robbie Knievel expects to launch his motorcycle on Oct. 24 at the Spa Resort & Casino in downtown Palm Springs.
Photo courtesy of Robbie Knievel

There have been broken bones. The possibility of blackout while hurling into the air with an imposing g-force. The thrill of completing the stunt. And the desire to give tribute to a legend.

For Robbie Knievel, the life-long pursuit of going higher and faster with his grand scale, dare-devil motorcycle jumping is both an exciting adventure and a dangerous passion.

“I do it for me,” Robbie says. “I grew up with it. I looked up to my Dad as a superhero. He had charisma and he did a lot of good things.”

The son of famed stuntman, Evel Knievel, Robbie has cheated death more times than he can count, tempting fate while attempting some of the most treacherous trick rides ever conceived. Robbie Knievel has set 20 world records and conquered more than 350 jumps including:

It might be difficult for the faint of heart to comprehend these death-defying acts, nor understand the motivation for such a level of suspense.

Knievel’s has been readying himself for his next performance jump at the Spa Resort Casino in downtown Palm Springs. He is the featured act for their fall fest, Brews & BBQ: Food, Music, Craft Brews & Cool Cars, on Oct. 24. The event will showcase local restaurants, craft breweries, live music by the band “Shaken Not Stirred,” a kids zone, and giveaways. Palm Springs Motorsports will be out with a display of new bikes, quads, and all types of all-terrain vehicles.

During his 45-minute show starting at 5 p.m., Robbie will reprise the spectacular jump similar to the distance he landed at Caesars Palace in Las Vegas in 1989.

This time, instead of clearing the illustrious fountains, he will attempt to safely fly over 25 big cars. (at this time, the type and makes of the autos is unknown). He alludes to the fact that the space at the Spa Resort Casino is “tighter” and he adds, “I hope I’ll get up and walk away without breaking anything.”

Robbie says he prepares for each jump by focusing on the ramp.

“I just focus and I like to be left alone…to sit and think and stare at the ramps to psych myself up,” Robbie says. “There is adrenaline when you go for the gold. In my case, my competitor is death. It’s another athlete. I keep beating it.”

VIDEO: Robbie Knievel talks about the risks of his profession.

On his bucket list, to recreate two of his father’s most notorious jumps:

• The Snake River Canyon Jump: Evil Knievel attempted to cross the Snake River with a rocket-powered cycle that crashed into the river.