A studio view demonstrates the scale — roughly 10 1/2 by 16 feet — of Untitled (Iceberg for Greta Thunberg), 2020, a charcoal drawing on mounted paper.
PHOTOGRAPHS BY AUSTIN HARGRAVE

Robert Longo looks every bit the New Yorker wearing a black button-down shirt by the pool of the Old Las Palmas house he’s renting. The artist has visited Palm Springs several times, staying at the bougainvillea-laced boutique hotel La Serena Villas and the second homes of his two longtime dealers, Helene Winer and Janelle Reiring, from Metro Pictures. He’s considering desert digs of his own, but this sojourn is coming to an end. He returns to his studio this month to finish drawings for a May exhibition in Paris.

Palm Springs embodies the antithesis of Longo’s art, which grows darker and more turbulent as the news cycle careens deeper into the outrageous. A progenitor of the Pictures Generation — artists who emerged in the 1970s and ’80s and were interested in working with mass media images — he became inextricably known for his early-’80s Men in the Cities drawings of business suit-clad men and women in contorted poses. But, for the last six years, he has focused on current events.

“I always talk about the image storm we’re living in,” Longo says. “People don’t actually look. I’m trying to slow things down. I find these images and alter them, transform them into iconic images, and give them some resonance.”

It’s more complicated than it sounds. Longo re-creates images in monumental, hyperrealist charcoal drawings that often fool viewers into thinking they’re mural-scale black-and-white photographs. (He uses paper with a subtle texture to give the charcoal a photo-like grain.) They’re so labor-intensive that deciding what to draw is almost as exhausting as the execution.

These days, the process frequently begins with outrage.

The shooting of Michael Brown in Ferguson, Missouri, for instance, hit him like a roundhouse to the gut. Referring to the photograph on which he based Untitled (Ferguson Police, August 13, 2014), now in the permanent collection of The Broad in Los Angeles, he says, “I remember seeing that picture in the New York Times, and I thought, ‘Oh, it must be Ukraine, or it’s someplace in ...,’ and then I saw in the distance a McDonald’s sign and an Exxon sign, and went, ‘This is fucking America.’ It was painful, so outrageous, and it called for a response." 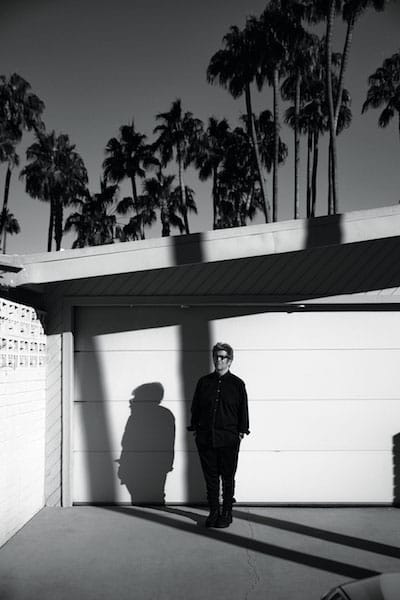 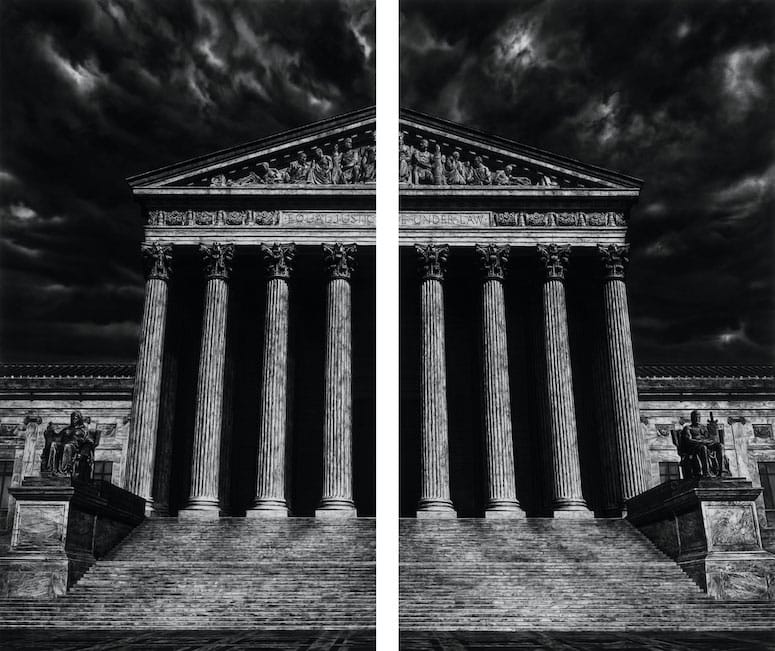 Ferguson sparked The Destroyer Cycle series, which includes chilling depictions of a kneeling football player; a bullet hole from the Charlie Hebdo shooting; the removal of a Nathan Bedford Forrest statue in Memphis, Tennessee (the subject was a Confederate general, slave owner, and Grand Wizard of the Ku Klux Klan); and a split and rotting Supreme Court building beneath an ominous sky. The latter two drawings appear in Longo’s exhibition Storm of Hope through Feb. 20 at Jeffrey Deitch gallery in Los Angeles. 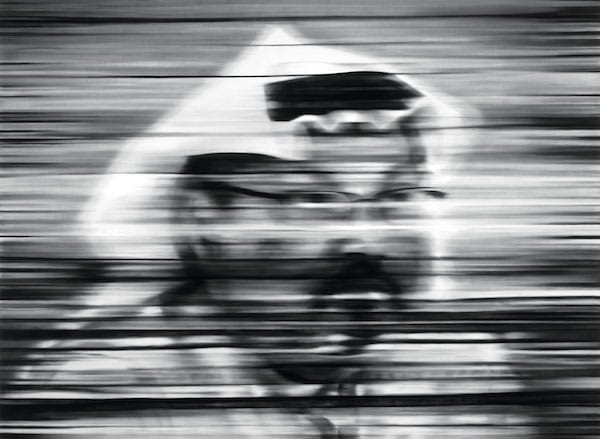 People, when they find out that they’re charcoal drawings, they look more, which I think is really important. Part of my work has always been this idea of ripping out parts of the world and showing them to the viewer and saying, ‘What do you think of this?’ You want people to make their own decisions about things, for sure. But at the same time, you want to construct a pathway to how you want things to be seen.”

The 7-by-10-foot Untitled (Jamal Ahmad Khashoggi; Istanbul, Turkey; October 2, 2018) shows the U.S.-based Saudi journalist, who was assassinated in his government’s consulate in Istanbul, disappearing into the poor reception of a television screen. “We’re forgetting about this guy,” Longo says. “So, I took the photograph — I buy the rights for all of these images — and then I ran it through an old television set and played with the reception. Then I photographed it, because I wanted the image to have tension, that if you turn a knob one way, you see it clearly, and if you turn the other knob the other way, it disappears. That’s where he’s at right now.”

Longo’s interest in the excesses of power and authority traces to 1970, when he graduated high school and the news was dominated by a Kent State University protest of the U.S. invasion of Cambodia. The Ohio National Guard fatally shot four unarmed students, including Jeffrey Miller, who went to high school with Longo and appeared in a famous photograph from the incident that still resonates with the artist. In the following years, he studied art history and restoration in Italy, graduated from New York’s Buffalo State College, and co-founded the still-operating Hallwalls Contemporary Art Center, where he exhibited Vito Acconci, Bruce Nauman, Lynda Benglis, Robert Irwin, John Baldessari, David Salle, and Richard Serra. In 1977, Longo moved to New York City with Cindy Sherman, another Pictures Generation artist, and quickly became an art star in his own right with Men in the Cities. 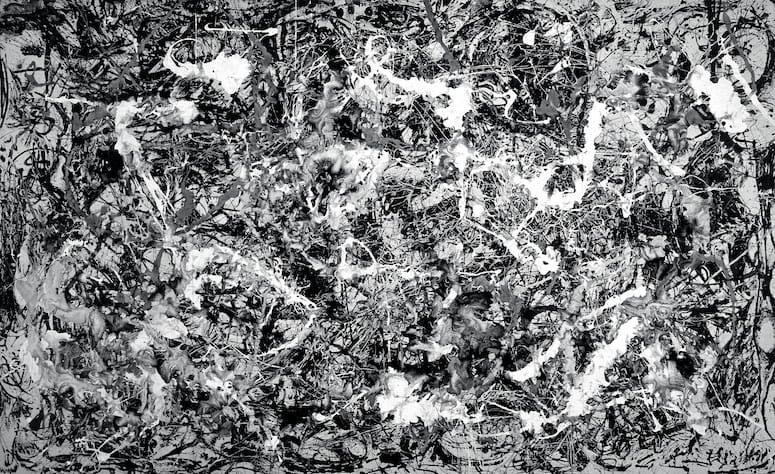 “I emerged as an artist during [the administration of Ronald] Reagan, the first guy who said, ‘Make America great again,’ but who could not say ‘AIDS,’” Longo says. “At that time, I became hyper-aware of how the government could come along and tell me I couldn’t make this stuff.”

Following Men in the Cities (1980-82), he created painting-sculpture hybrids (Combines, 1982-88) and sculptures of blackened American flags (Black Flags, 1989-91) before returning in earnest to drawing. The next two decades would bring larger-than-life-size guns (Bodyhammers, 1993-95), Sigmund Freud’s consultation room in Vienna during the Nazi occupation (Freud Drawings, 2002), atomic bomb blasts (Sickness of Reason, 2002-2008), as well as series of sharks, planets, waves, swimmers, roses, and horses.

“What I’m trying to do,” Longo says, “is find this balance between something that’s highly personal and also socially relevant.”

Other drawings in the show at Deitch include Untitled (California Wildfire), Untitled (Iceberg for Greta Thunberg), and the three-panel Untitled (White House). “I made the White House with this gnarly forest around it,” he says, “and the front of the White House as a sink hole. Somewhere in those windows, very subtly, is this little profile, like the Alfred Hitchcock profile, of [Donald] Trump. It’s hard to see.”

Ironically, for all his hyperrealism, Longo loves supersized, unapologetically American abstract expressionism. He studied paintings by Willem de Kooning, Jackson Pollock, Joan Mitchell, Lee Krasner, Robert Motherwell, Mark Rothko, and others and audaciously re-created them as a series of exacting drawings. In the Deitch exhibition, Untitled (After Pollock–Convergence, 1952) reveals, in more than a dozen values of black charcoal, the details of Pollock’s famously strewn surface.

The Deitch show also includes Longo’s 2-ton Death Star, a massive sphere composed of 40,000 AR-10 bullet casings and tips, reflecting the number of deaths from gun violence. Neoset Designs in Brooklyn helped the artist realize the sculpture, which hangs from a chain attached to steel I-beams. An earlier iteration of the piece, from 1993, had about 18,000 blank bullets. “I was so shocked at how [deaths] increased that it demanded to be remade,” he says. “The biggest difference is that the average bullet back then was a .38 caliber; now, the average bullet is for the assault rifle.” 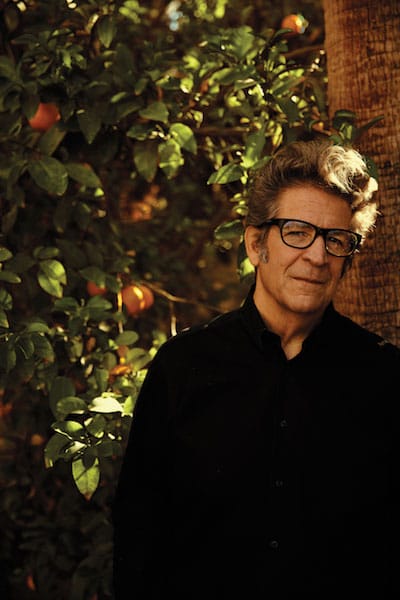 “I became hyper-aware of how government could come along and tell me I couldn’t make this stuff.”

Longo turns 68 this month and is excited about the New Year. With this show closing Feb. 20, he’s now focused on Paris, where he’ll exhibit a pandemic-inspired diptych juxtaposing an empty Yankees Stadium with thousands of flying bats, as well as a NASCAR crash that looks almost like an abstract expressionist painting with one car falling apart in mid-air.

It’s probably a safe bet he’ll be back in Palm Springs next fall. The longer he stays, the more he discovers he knows people in the desert, including collectors and artists. Although he already splits his time between New York City and East Hampton, he’s softening to the idea of becoming bicoastal. 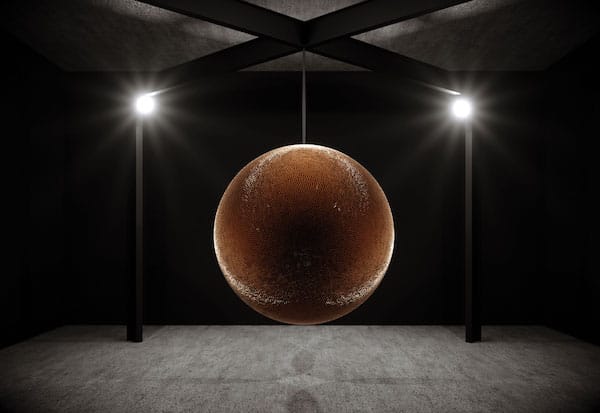 “I was talking to a friend about this as we were riding bikes around Palm Springs,” Longo Says. “I was saying, ‘You know what? Growing up, I remember being in Paris and going, Did I ever imagine as a kid that I would be in Paris? And I said, ‘Maybe, but did I ever imagine I would be in a place like this? Never.’”

• The Deitch Connection: Dealer Jeffrey Deitch was first to buy Longo’s art in the late 1970s. “He saw Men in the Cities and wanted me to do a portrait of him. Jeffrey categorically didn’t fit into the way the guys looked in my Men, but I said OK, and the first one I did didn’t have a head. He says, ‘I really like that, I’ll buy that one, but could you do one with my head?’ I made one with his head, which was kind of cool. But I remade the one without the head, and it became part of an important triptych.”

• Monolith Madness: Longo’s 2018 sculptures More Monolith and Lost Monolith appear in his show at Jeffrey Deitch in L.A., but he’s not responsible for the tall, metal sculptures appearing and disappearing around the world. However, the artist applauds the mysterious saga. “I thought that was so cool,” he says. “I was jealous. I love when people make art that I can be jealous of. That’s the ultimate compliment to other artists.” Longo inscribes his monoliths with text describing what we’re accumulating and losing: lost energy, lost time, lost respect, or more empathy, more money, and more trust.