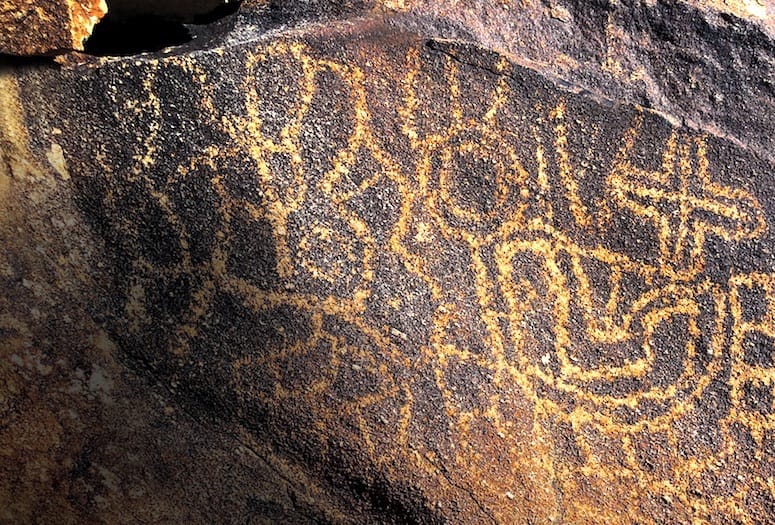 Created some 1,600 years ago on land belonging to the Agua Caliente Band of Cahuilla Indians, the faded images — diamond chains and chevrons, as well as a humanlike figure with outstretched arms and legs — were painted in red ochre, a natural paint pigment made of iron oxide and other minerals, across a large boulder known as Sacred Rock. Parts of the paintings, or pictographs, are easy to make out, while others have been worn or entirely weathered away by the elements. The Tribe offers ranger-led interpretive tours that include Sacred Rock, since it is one of the few rock art sites that exist along the Tahquitz Canyon trail. While rock art is prominent throughout the Cahuilla Traditional Use Area, it often exists in caves or remote locations where only few may ever encounter it.

These pictographs, as well as carved images classified as petroglyphs, are considered humankind’s earliest form of creativity and written communication and are not exclusive to the Coachella Valley, or even to Native American tribal lands. They appear in culturally diverse landscapes around the world and can be oddly similar in places located thousands of miles apart. For decades, archaeologists have been studying what this early art form can teach us about ancient cultures, as well as devising new ways to date it. Most rock art in the Coachella Valley and surrounding desert is believed to be between 2,000 and 3,000 years old, but on other continents there is evidence of pictographs dating back 70,000 to 100,000 years. Despite considerable research, most rock art experts say they are only beginning to scratch the surface of these beautiful discoveries. 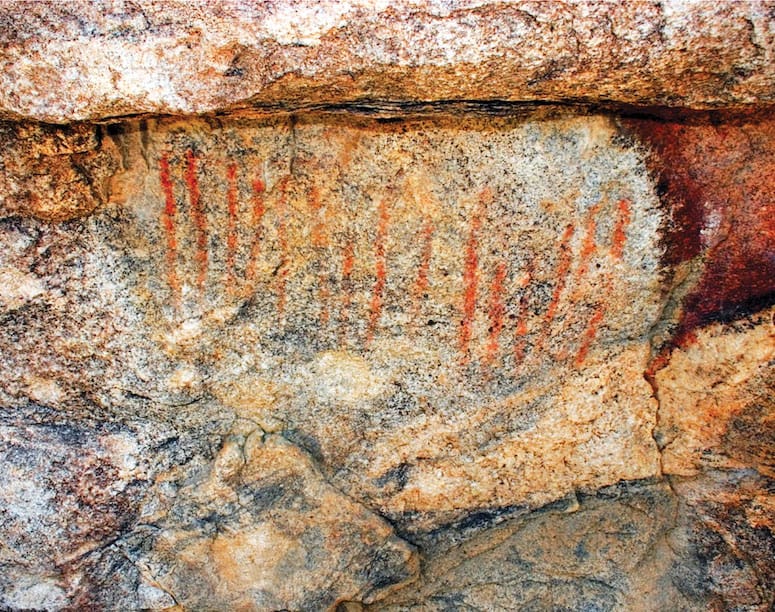 A pictograph rock art panel consisting of 15 vertical lines in red ocher, located at a sacred site in the Agua Caliente Paniktem village.

The meaning remains a mystery

While archaeological understanding of early Native American life in the Coachella Valley might provide context for rock art here, it is impossible to interpret it with certainty “without ethnographic data to back it up,” says Wade Stevenson, a tribal ranger for the Agua Caliente Band of Cahuilla Indians, adding that practical drawings and etchings, such as the mapping of astrological events, are easier to interpret, and anthropomorphic figures reveal that the first people in the Coachella Valley were very spiritual. Beyond that, he and other experts can only speculate.

“Certain images, given their location, are thought to correspond with specific ancestral narratives, like the migration story,” he says. Other images likely depict communal events like coming-of-age ceremonies, communication, or spiritual visions. “Some of these rituals are still very much alive and very personal,” he adds.

Some rock art is also esoteric — its meaning can only be understood by the individual or the few people who created it. “There are as many potential sources who could have created these images as there are reasons for why they did it,” Stevenson says. “We may never really know the intent of the communication. This is what makes it such a great mystery.” 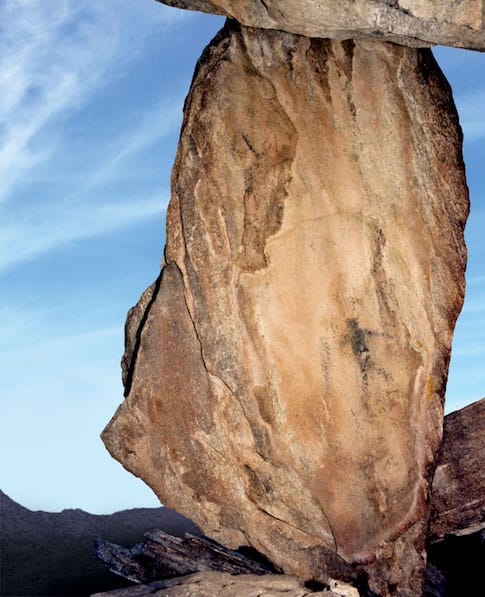 This pictograph, painted on a boulder slab, consists of charcoal human figures and red-ocher diamond chains, as well as various ocher streaks and charcoal smears. A sketch of the pictograph shows a clearer depiction of the drawings. 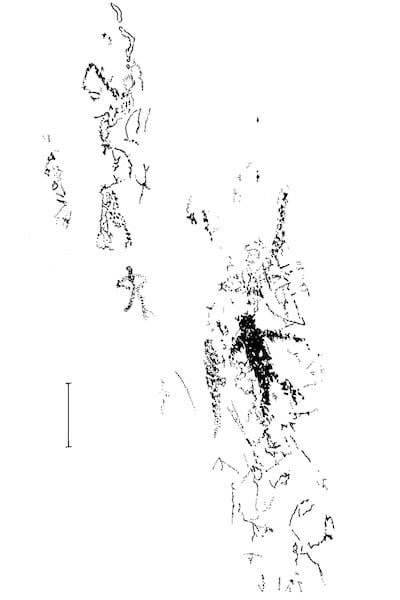 What can the images tell us?

David Lee is an independent researcher with Western Rock Art Research in Bishop, California, and an affiliate of the American Institute of Archaeology who has spent decades studying petroglyphs and pictographs here in the Coachella Valley and in Australia. His work is not about decoding the meaning of the images, but rather discovering how the images fit into the lives of ancient people. Most researchers around the world, he says, stopped focusing on interpretation long ago.

“It turns out that all the various theories researchers came up with fall apart when compared to actual data still found at rock art sites, and most importantly, what traditional peoples have always said about these images,” Lee says.

The Cahuilla territory consists of mostly pictographs and petroglyphs depicting geometric rectilinear designs like zigzags, chevrons, straight lines, diamond chains, and dot patterns, often bordered at one end and occurring in vertical series. Archaeologists call this style of rock art San Luis Rey — one of three styles they use to categorize rock art in Southern California. These types of images are also prominent among the nearby Luiseño, Cupeño, and Kumeyaay territories.

These styles, Lee says, are a way for researchers to observe similarities and differences between rock art sites, as well as to better understand physical boundaries that existed between the Agua Caliente and neighboring tribes. “The farther from this area you travel, you see less and less of this style,” he says. The Rancho Bernardo style (defined by large, maze-like motifs, plus some zigzag and crosshatching patterns) and La Rumerosa style (lizards, anthropomorphs, sunbursts, oval grids, crosses, and unique historical elements) overlap with San Luis Rey on some sites and occur more frequently to the south and east of the Coachella Valley. 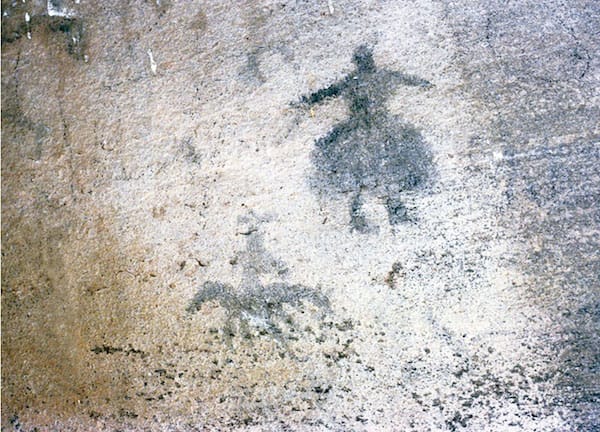 A pictograph depicting black charcoal drawings with historical motifs, including a horse, an equestrian riding figure, and a human figure wearing a skirt.

“Among the petroglyphs, Palm Canyon has a high concentration in the Rancho Bernardo style,” says Steve Freers, an avocational rock art specialist who’s authored two books on the subject while researching rock art throughout Southern California and the Grand Canyon. Miscellaneous styles of rock art can also be seen at various locations in the mountains and along the foothills to the west. This includes a site in Andreas Canyon, where there are motifs of human figures wearing hats.

“The Agua Caliente were known for historic rock art that included equestrian riders, men in hats, and women in high-waisted work dresses, which was something you didn’t see from other tribes in the area,” Freers says. Images like these help archaeologists narrow down a potential time frame for their creation, though the meaning still remains obscure. “Were they celebrating these images? Did they fear them? …We have no idea,” he continues, adding that since the first recorded European contact was in 1775, those images would have likely happened after that. 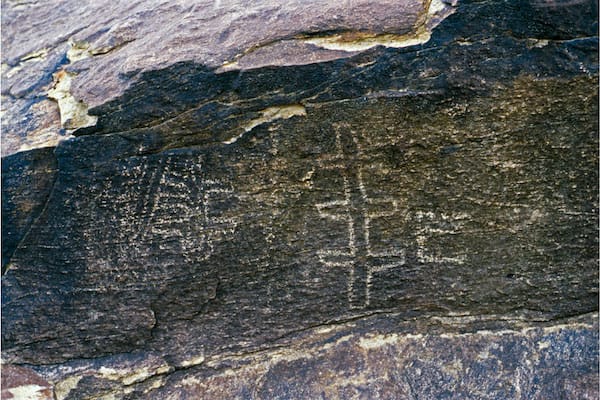 How it was made

“Pictographs were typically made with Earth’s minerals,” Freers says, adding that local rock art is predominantly red or black, though white and yellow are found in some places, which indicates that trade existed between tribes.

“To make red paint, they would take hematite and mix it in a potsherd with some type of organic binding agent, like oil from an acorn plant,” he explains. “The red color could be intensified by heating the sherd.” Another method was to first crush the mineral in a rock mortar with a pestle, then mix it with water to create a mud. “This mud has some self-binding characteristics,” he says, “though the paint will not endure as well as one mixed with oil.” This might explain why we don’t see as many pictographs on rocks that are exposed to the elements. Charcoal or manganese were commonly used to create black paint, and white “chalk” might have come from diatomaceous earth or clay.

We may never really know the intent of the communication. This is what makes it such a great mystery.

Potsherd in hand, the artist would typically use his or her finger to paint directly on the rock’s surface. “You can often see the stop and start of the fingertip in macrophotography,” Freers says, “though we do know yucca paintbrushes were also used.”

Freers believes the process of painting — more so than the design being painted — was where most of the meaning and power existed for the artist. “The paint itself was significant. The rock was not just a rock but a way of connecting with the landscape,” he says. “What better way to spiritually interact with the earth than to paint with your own hand?”

Petroglyphs in the Sonoran and Colorado deserts range from representational art to hemispherical dimples, called cupules, which are typically found in clusters. Petroglyphs are carved by pecking at the stone’s surface with a sharp tool, such as a chisel and hammerstone. These are more difficult to date because there is no organic matter in the rock, Stevenson explains. “Therefore, we must depend on desert varnish — that reddish-black coating on the rock surface comprising minerals, oxides, and other particles — to give us an estimate.” 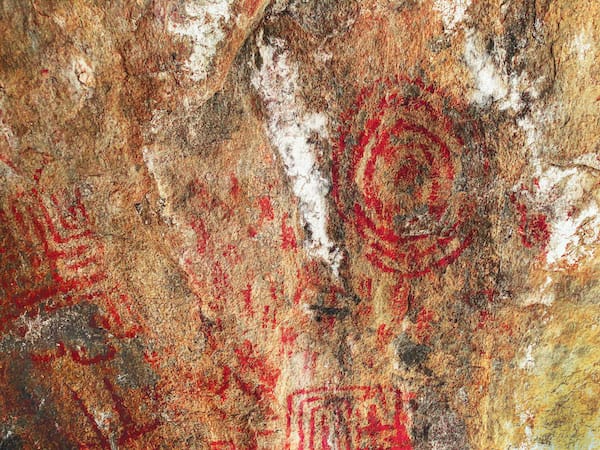 A red-ocher pictograph depicting various geometric shapes and figures. According to Ague Caliente Tribal Ranger Wade Stevenson, some drawings represent the mapping of astrological events, correspond with specific ancestral narratives, or depict communal events like coming-of-age ceremonies, communication, or spiritual visions. Others simply cannot be interpreted and remain a mystery.

Patination darkens over time, so the darker the petroglyph, the older it is. But geologists have conflicting theories about what causes this varnish and what that process indicates about its age. “So there’s no universally accepted date range on any of this stuff,” Stevenson concedes.

Regardless, experts agree many of these images depict timeless lessons about our shared human connections and values, including respect, responsibility, and reciprocity. “The more we study the past,” Freers says, “the more we understand that humans got here through cooperation, not through competition. We need to relearn this through traditional peoples, so we can go forward into a better future.”