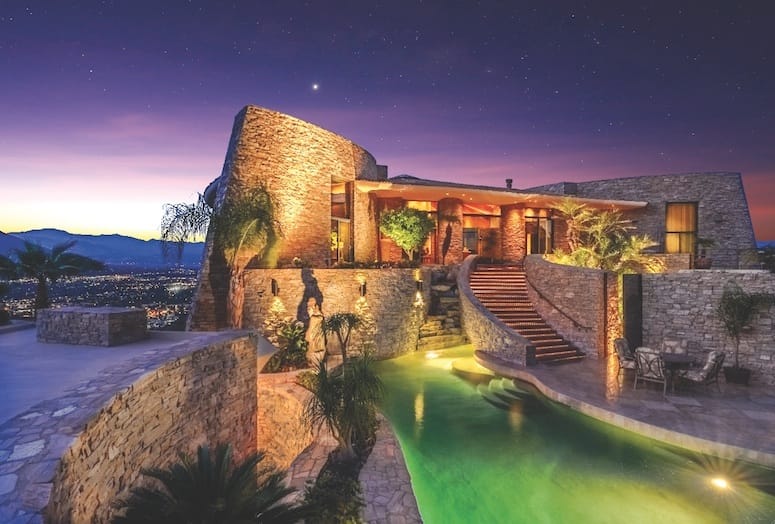 Everybody Must Get Stone. La Piedra, Southridge retreat of the late actor David Janssen, is an impressive rock quarry.
PHOTOGRAPHS BY DOYLE TERRY

Dr. Richard Kimble spent five years on the run, haunted by charges of a murder he didn’t commit and seeking to prove his innocence by finding the guy who really did kill his wife. The Fugitive ran for four seasons in a classic story of delayed gratification that might well serve as a metaphor for the Palm Springs real estate adventures of David Janssen, the actor who played Kimble.

In the mid-1970s, Janssen commissioned architect Edward Giddings to build him a home in the tony Southridge neighborhood of South Palm Springs, where rocky hilltops and windy conditions challenge the design and maintenance of its signature residences. Other notable edifices in the ‘hood are John Lautner’s curvaceously roofed Hope house, and also his Elrod house. Another notable is the Hugh Kaptur–designed residence known as the Steve McQueen house, and a curiosity built by Michael P. Johnson dubbed the Boat House for its resemblance to a ship’s hull.

The Janssen home took Giddings seven years to complete, and the result indeed was impressive. Not that Janssen would know — he died young in 1980, three years before the house was completed.

Giddings had fulfilled both of Janssen’s requests: The home had to be spectacular, and it had to be stone. La Piedra, as the property was called (Spanish for “The Stone”), was a single-story structure constructed from more than 400 tons of Idaho quartz. With views that go on forever, La Piedra is the perfect estate for a multi millionaire fugitive to keep on eye out for the law.
Photo by Doyle Terry

In 2004, the residence was renovated at a cost of $2.6 million, and plied with even greater quantities of piedra — tons of additional quartz was stacked to add a mosaiclike curved wall. Other improvements included the removal of walls and closets that had impeded the jaw-dropping views afforded by the floor-to-ceiling windows in the great room, whose ceiling stretches to 23.5 feet.

According to Will Fuller, the co-listing agent for the property (yours for a tad less than $7.3 million), locating the new wall’s proper piedra required missionary zeal. “To match the color of the existing quartz,” he says, “stone had to be quarried from different parts of the mountain from which the original stone came … ”

The 7,500-square-foot quartz, concrete and wood temple embraces several Giddings trademarks, including the large glass windows, dramatic ceilings, and exposed beams that render the residence so grand you feel compelled to straighten your shoulders upon entry. There are five bedrooms, six bathrooms, a breakfast room, gym, and the aforementioned great room, replete with a dining space and sunken wet bar.

The 2.25 acres of grounds provide a dramatic setting for an outdoor kitchen, fire pit with de rigueur stone benches, a travertine shuffleboard court fringed by putting greens, and water falling into a swimming pool accessorized by a spa.

Then there’s the garage. The next time you see a real estate listing that touts garage amenities will be the first, right? Make that the second: La Piedra, says Fuller, “has one of the most unique garages in the entire desert. One of the two individual stall[s] … is built against the side of the mountain with an entire wall of exposed stone.” The other sports a window offering panoramic valley views. In addition to these primo spots, there’s a carport with two spaces, and several other places to park your myriad vehicles.

We assume the spaces are occupied most of the time. Because no one would want to remain a fugitive from this home.