Date Shed at Empire Polo Club (the Indio home to both festivals) satisfies those who dig the Coachella vibe. 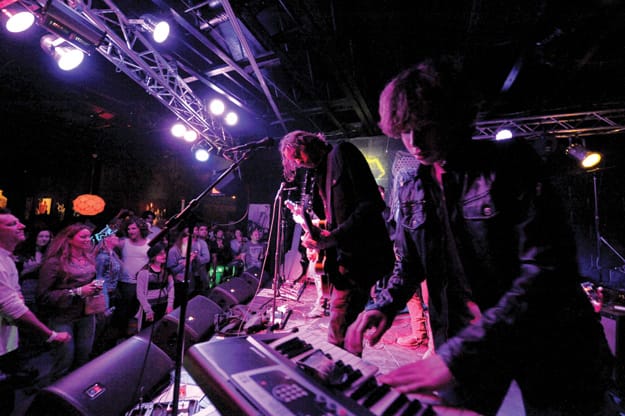 Looking for live action outside of the Coachella Music and Arts and Stagecoach music festivals? Date Shed at Empire Polo Club (the Indio home to both festivals) satisfies those who dig the Coachella vibe.

Proprietor Alex Haagen IV describes Date Shed as “not a bar with a stage, but a music venue that happens to have a bar. The lighting and sound systems are what we thought about first. The rest of the space was created around that.”

The atmosphere inside the musician-friendly space feels more like an underground urban club than a reconverted barn, and the bands booked reflect that.

“We have everything fromblues to rock to hip-hop to alternative, and this year we’re dedicating one night a month to country music,” Haagen says. “We want to bring in the best artists possible to carry the Coachella feeling throughout the year.”

Another eclectically funky venue is Pappy & Harriet’s pioneertown palace. Tucked away in the High Desert, it’s easily among the coolest (and most unlikely) music venues around. Catch a great mix of indie rock, classic rock, and country. The bands, even the relative unknowns, are uniformly great, and the kitchen serves a mean barbecue sandwich.

On the other side of town, Riviera Palm Springs brings cool sounds to life in The Starlite Lounge, Sidebar, and Bikini Bar.

A new arrival on the local live music scene is Woody’s Burgers, situated in what was once a Greyhound Bus station. In the front, an updated 1950s-era diner serves terrific food. The surprise is Woody’s back door, which leads to an area hosting live music nightly. Scheduling leans toward high-end jazz musicians, with the occasional blues performer, comedy, and karaoke. With its “hidden” entrance and hipster performers, Woody’s feels a bit like a prohibition-era speakeasy.

If you prefer old-school supper club ambience, you have several tempting options. In Palm Springs, three sixty north lounge and restaurant serves its steaks and seafood with cabaret-style entertainment. Music ranges from jazz to R&B to American standards and show tunes, depending on the night.

In Palm Desert, Castelli’s Ristorante serves up Tuscan-style fare with live music every night. Jazz musician Patrick Tuzzolino performs Sunday through Tuesday, and pianist/vocalist Joe Jaggi performs Wednesday through Saturday. “Our atmosphere is that Frank Sinatra/Dean Martin vibe,” office manager Linda O’Melia says. “Both musicians stick to that style, though Patrick is more of a laid-back lounge singer and Joe is a bit livelier.”

For good old-fashioned rock ’n’ roll, let your ears lead the way to Las Casuelas Terraza, the popular Mexican cantina in downtown Palm Springs. Toss down a top-shelf margarita on the palapa while listening to crazy-good house bands Palm Springs Sound Company and Hot Rox. Both groups play classic rock and oldies every night of the week, and during the day on weekends.