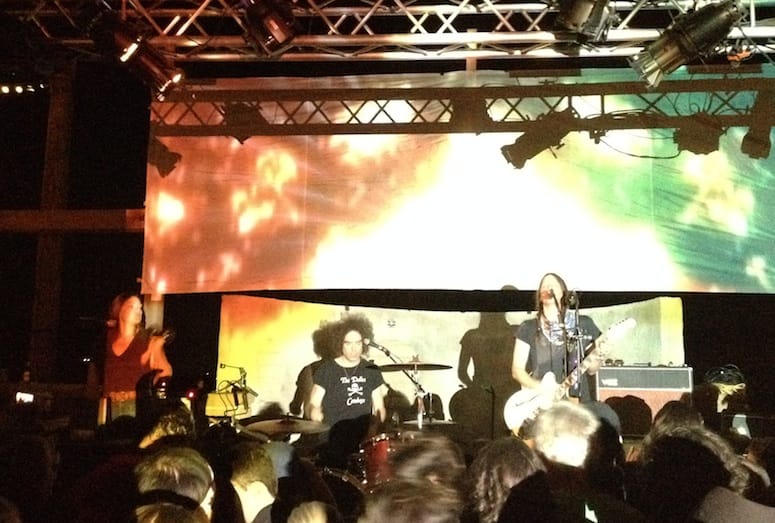 The abundance of good-looking people with edgy haircuts in bohemian attire, the thick indie rock sound enveloping every corner of Pappy & Harriet’s outdoor area, the jovial and youthful atmosphere transported me back to my Silverlake backyard for a few hours. I really felt at home and enjoyed every second of this year’s Desert Stars Festival that delivered on its promise to be the best ever.

Dozens of music acts performed from three stages including Jesika von Rabbit, Miranda Lee Richards, and The Dandy Warhols. Being able to see different bands in a cozy setting like Pappy’s is priceless, thus it creates a real intimate interaction impossible to establish in big arenas. Musicians feel free to experiment and improvise, just as if they were playing in their own living room. This is precisely what happened during the Warhols’ set, the moment when the generator stopped working after only three songs. The lead singer, Courtney Taylor-Taylor, kept performing, diving into an acoustic version of “Every Day Should Be A Holiday” and then taking suggestions from the audience as to what songs they wanted to hear next.

The loud sing-along went on for a good 10 minutes until the generator came back with a roar and the show continued with the signature songs “Bohemian Like You,” “Godless,” “The Last High,” and many others from their garage-pop-rock repertoire.

Taylor concluded the set by saying “You guys are so cool, you are my best friends.” That was the perfect love note for a two-day event that brought together many indie bands and music lovers in a place that Taylor said it’s his “favorite in the whole world.” Even the festival’s main sponsor, Lyynks, is all about love — it’s a music platform that works on a grassroots level to give each band the opportunity to reach their fans.

At Desert Stars Festival, this mission was accomplished. It was definitely an interactive stargazing affair!