Palm Springs - things to do | Rock the Holidays with Brian Setzer 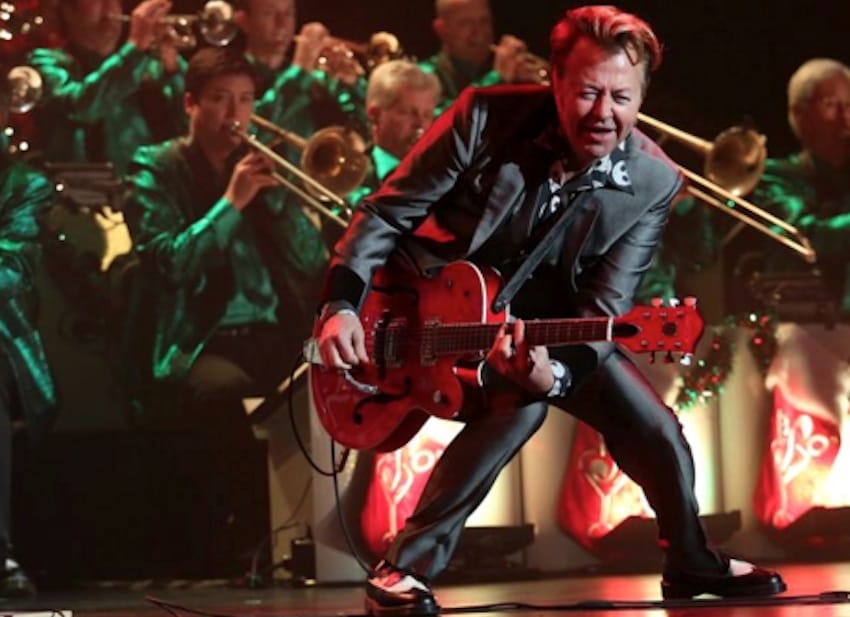 When word reached the Palm Springs Life offices that Brian Setzer was not only embarking on a 31 city tour for the 12th holiday season in a row, but was releasing his first studio Christmas album in 10 years entitled, Rockin’ Rudolph, the inevitable jokes quickly circulated. Ok, maybe it’s a bit early in the holiday season to successfully demonstrate the razor sharp wit of the PSL staff.

The fact is, it’s a little difficult to get one’s head around the idea that the once ultra cool rockabilly who has won three Grammys, sold 13 million records, was asked by the Smithsonian to donate a replica of his 1959 Gretsch guitar, and (in perhaps the highest tribute of all) was animated in a season of the Simpsons, is now leading big band sing-alongs of “Yabba-Dabba Yuletide”, “O Little Town of Bethlehem”, and “Hark! The Herald Angels Sing”.

Ok, I’m no Grinch. Some great modern vocalists from Bing Crosby to Nat King Cole have elevated songs such as “Have Yourself a Very Merry Christmas” into jazzy holiday standards that make even last minute dashes through department stores bearable. Song selection is critical. Even Nat King Cole knew that “Good King Wenceslas” was beyond his reach.

Take “Yabba-Dabba Yuletide”, a holiday ode to the Flintstones and the decidedly un-Christmasy town of Bedrock. Yet, once you get past the eye rolling, Hanna-Barbera flashback ‘yabba dabbas’, Setzer takes over with some of the sweetest licks on his guitar that have been heard in years.

Indeed, Setzer’s orchestra on the album, particularly the horn section, has the ability to make you feel like it’s a big band Christmas recording of 60 years ago. And while Nat and Bing’s Christmas vocal supremacies remain unthreatened, Setzer does justice the most romantic standards of the season such as “Most Wonderful Time of the Year” and “Have Yourself a Very Merry Christmas”.

Frankly, nothing has gotten me pining for spiked egg nog, holiday wreaths and gingerbread men faster and more completely than “Rockin’ Rudolph”.