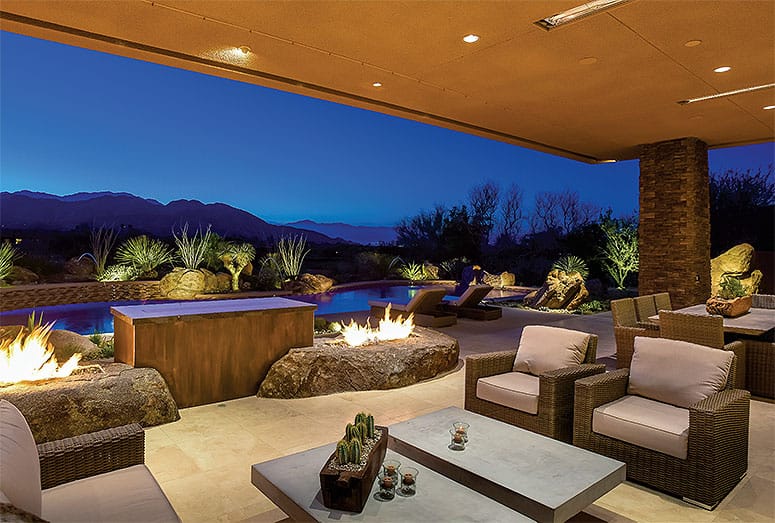 "It’s good to get out of the office and kick the dirt," says designer Angela Wells. Her nonchalance belies her impressive portfolio at The Reserve and a mounting client list of custom spec houses at Sterling Ridge and Mirada Estates. By "kick the dirt" Wells is referring to the arduous process of hand-selecting rock-yard boulders to fulfill her designs. Each monolithic jewel unmistakably brings the outdoors in when plunked down amid her otherwise refined living environments. The boulder handpicked for this soaking tub was the "baby of all babies," says Wells, who scoured a mountain of rocks for a perfectly round boulder. "I was looking for a circle, and rocks don’t come in circles," she says with a laugh. "I wanted it to curve up on top like a pebble." Sunk halfway into the ground, "it’s only half as big as you see it," placed between a fossilized black granite shower and a courtyard with an outdoor shower that sprays from another boulder. A valve on the wall fills the tub from the ceiling.

On her pre-construction quarry hikes, Wells is on a mission to find boulders of a specific dimension, color, and shape. Hours from home, she negotiates a sunbaked field of rocks on foot to source them. The winning 8- to 12-ton boulders hop a truck back to the desert where they turn into her custom fireplaces, fire pits, soaking tubs, and other features. "It’s part of the design, and it’s going to be in your house forever," she explains of her exacting quest for perfection.

Wells credits her father for this set-in-stone obsession. She grew up watching dad Daniel Foxx manhandle gigantic boulders in his landscape designs for The Foxx Company. She says the towering boulder walls he erected to fortify Rancho Mirage’s Sterling Estate in the early 2000s rubbed off on her as an early influence. "Every designer has a niche and I fell into an organic, desert contemporary aesthetic," Wells says. Wood, stone, water, and fire elements define her homes with welcoming warmth — often on a colossal scale.

Her first home debuted with a titanic boulder fireplace six years ago; she has been a rock hound ever since. "There’s nothing intimidating about it," she says with a shrug. "It’s a rock. You draw on it where you want it cut." It’s that easy? Maybe for Wells, who says she immerses herself at the rock-cutting level for all of her homes. Wells complements a boulder fireplace in this home at The Reserve with a wood console, stone wall, and metalwork and a lighting feature that she created above the fireplace.

"Even if they don’t ask for one, I usually suggest it," says Wells, who admits it can be an acquired taste. "Not everyone wants a 10-ton boulder in the middle of their bathroom." But those who do can dream of little else. "People no longer want overdesigned spaces. They’re beginning to realize how fast that dates a home," she says. "Natural elements are elegant and classy. They seem to withstand the test of time," in addition to rocking a bold look throughout her commissions.

In a Mirada Estates custom spec home that Wells is finishing up, a boulder hunkers down at the end of the kitchen island for visual intrigue. In the powder room, a stately stone stands dutifully as a pedestal sink. After a basin was carved, Wells had the top and the sink polished to contrast with the rough exterior, resulting in a one-of-a-kind statement piece.

The Reserve is where Wells has done the most design work, upwards of 11 projects starting in 2009. Her flair for incorporating Mother Nature can be found in the community’s custom spec homes and ground-up turnkey client residences as well as in remodels and smaller design projects. "I love it there and it’s an amazing development if you want that natural look," she says. "It really speaks to what we’re doing with its undisturbed land and lack of curbs. It feels like a private resort built right into the mountainside."

Multi-ton rock accents require massive planning. When Angela Wells and her clients want to see boulders from living room to bathroom to entertainment patio (and they almost always want to), this hands-on designer dusts off her climbing shoes.

2 Spend roughly two days climbing over and around enormous boulders, searching for the ideal size, shape, texture, and color of rock. 6 Recruit multiple men to place them in exact location on property lot. Larger boulders that weigh too much to be supported by the pad are installed before concrete is poured. Smaller ones (under two tons) can be installed during framing. Wells wanted this dining room at The Reserve to appear "all natural, with nothing manufactured," a look she pulled off by incorporating a stone wall, woven baskets, and a wood trough as a planter. The slab table required six men to move it into place. At 10 feet long and 5 feet wide, it weighs 800 pounds.

Wells completed the LEED silver–certified home shown on these pages for a two-time Reserve client who favors the "cave look." He insisted that his home appear nearly indigenous, as if it has rested on its lot for centuries. Among its boulder soaking tub, living room fireplace, and patio fire pits, Wells mingled other large-scale furnishings and accents that have roots in primitive living. Wood slab tables and consoles find harmony with stone walls, woven baskets, granite countertops, and a dash of cowhide.

Take note that boulders are only a fraction of what Wells does, masterminding homes from the ground up with a staff of seven. Though this confident thirty-something is certainly one of the desert’s younger designers, she is self-described as "a rebel in the industry in regards to some of my designs, but a power player nonetheless."

That power gets a push from the past. Wells’ work is part throwback to the midcentury greats who had their own way of taking natural materials to an extreme. "Frey, obviously, for instance," she says of architect Albert Frey. "I call him my spirit animal." Having grown up locally, Wells says she has always been enthralled by the legends who designed and built the valley’s architectural foundations.

"They either built the homes into the mountainside and threw glass around them or put rocks inside and used them as a piece of furniture," she remarks, adding that she strives to reimagine that aesthetic, incorporate the desert landscape, and carry on the tradition. Although the mountainside home projects still elude her, the incorporation of semi-truck-size boulders into many of her projects does not. "Our homes pay homage and that’s exactly what many people want — even if they don’t have a midcentury or a modern home. So for me, it’s coming full circle."