Rocket Fizz Offers Blast From the Past Candy, Soda 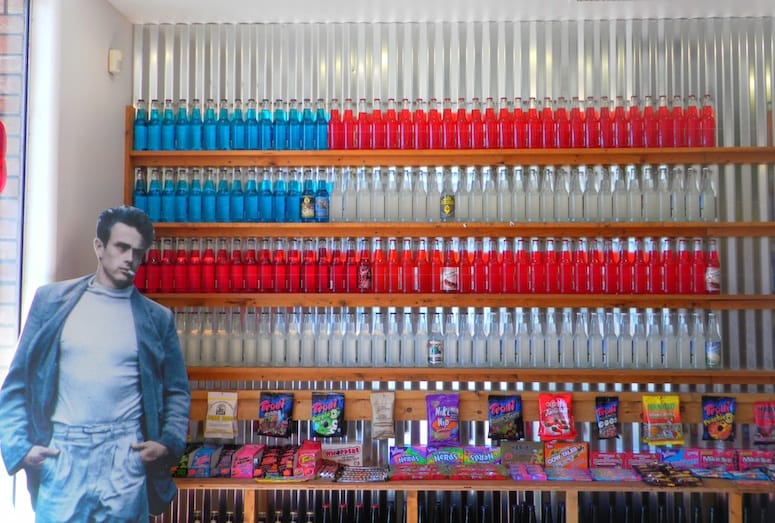 Brian Williamson thought it was time to be his own boss.

He had seen enough of them pass before his eyes at his last position in commercial swimming pool sales.

“I worked for a couple of big corporations, lots of spreadsheets, lots of conference calls, and I just got tired of that,” Williamson says. “Honestly, I was at my last job for 12 years and I had 14 bosses, and when they hired the 14th one I was like, ‘Check, please.’”

Williamson has traded his briefcase for retro soda and candy with the recent opening of a Rocket Fizz franchise in downtown Palm Springs.

The shop on South Palm Canyon Drive recreates the candy store once the epicenter of every child’s sweet dreams.

“Even if it was just a 5 and Dime, we all have a place we went somewhere,” Williamson says.

Rocket Fizz specializes in retro soda and candy with 46 stores in 14 states.

“What we try to carry are things from across the country that you can’t get in Wal-Mart or Vons or Albertsons,” Williamson explains. “I have Coke, but it’s the original sugar formula from Mexico. In fact, about 90 to 95 percent of the soda here is all sugar based.”

Try some of these store favorites as recommended by Williamson: Here’s a collection of five sodas with each label more racy than the last. If you’re not easily offended and find political puns humorous, Rocket Fizz has something bubbly for you. Try Fidel Castro’s Havana Banana, Kim Jung III’s Nuclear Orange Bomb, the Stalinade, Osama bin Laden’s Seal Ya Later and Gaddafi’s Cream My People. The Big Hunk candy bar, made with honey-sweetened nougat and whole roasted peanuts, evades most candy aisles forcing most to order online. Rocket Fizz has a generous pile for purchase. The store stocks sodas from the Lester’s Fixins collection with soda favorites such as the Bacon, Ranch, Peanut Butter & Jelly and Buffalo Wing Soda. The Buffalo Wing Soda packs a spicy punch with its orange-soda base. Looking for a new prank or do you tend to prepare early for Halloween? If so, add the Arrow Thru Head! to your collection. Williamson spoke reminiscently about a past Halloween when Rocket Fizz was still inside Palm Desert’s Westfield Mall. Apparently kids ogled at this headband thinking, “that can’t be real because you’re still talking to me.” The candy past generations could purchase in quantities of one for a penny are now available in a 10 pack at Rocket Fizz. The candy that originated in the 1900s is still enjoyed today by “nipping” off the wax bottles top and consuming the flavored syrup inside.

Last, but certainly not least, are the variety of signs that adorn most of the store’s walls. Some customers are so enthralled with the displays of sweets that they forget to look up. “I’m guilty of this, Williamson says. “I used to shop at these (Rocket Fizz) in Los Angeles and I went in there probably three times before I noticed the signs. I have what you call candy vision.”