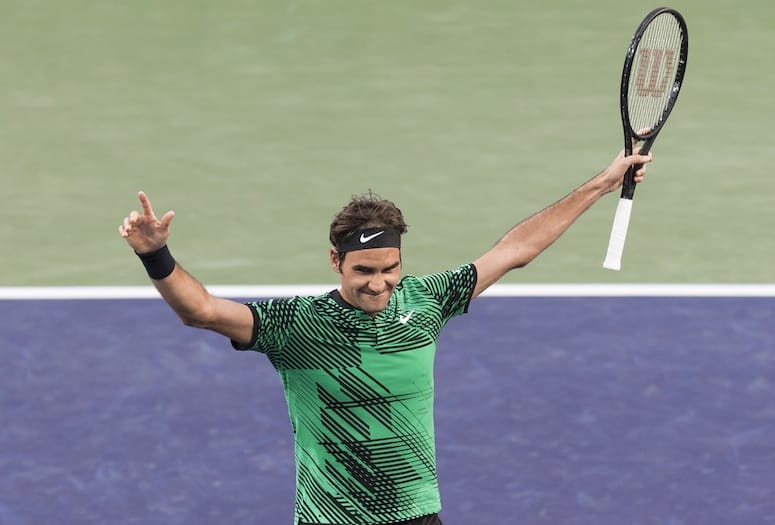 In a match expected to be dripping in drama but never shed a drop, Roger Federer demolished Rafael Nadal Wednesday in the fourth round of the BNP Paribas Open.

The 16,100-seat Indian Wells Garden main stadium was as packed as it will ever be for a late afternoon fourth-rounder, with temperatures still in the 90s and descending sun in the eyes of many in the stadium. This was supposed to be Dempsey-Tunney. Instead, it was closer to the New England Patriots versus the San Francisco 49ers.

Federer’s performance was virtuoso. He was a man, in total control of everything, tapping his baton on the podium as the orchestra’s crescendo found perfect harmony and tune. He strolled onto the court like a man waiting for the valet to bring his car around. No hurry. No worry. He had this.

Federer’s performance was virtuoso. He was a man, in total control of everything, tapping his baton on the podium as the orchestra’s crescendo found perfect harmony and tune.

Federer has won more major tennis titles than any other make player, 18. He has won the title here, at a tournament generally considered the fifth major, four times. He is a multi-millionaire, an international spokesman for the sport, a man who wears a tuxedo as easily and comfortably as his tennis shorts.

He is also 35 years old, well past midnight in terms of tennis age. And he has four children, two sets of twins. Some wag once joked that, for every twin, a parent would gain five-year’s worth of gray hair. That would make Federer 55, or at least bald.

He also spent half of last year out of action with injuries. For most people, the road back would be long and tortuous. Not for Federer.

Federer was playing his good friend and close rival. Nadal has won 14 major titles himself, second most in history with Pete Sampras. Nobody pushes Nadal around on the court. Wednesday, Federer did.

They have now played 36 times. Nadal has won 23. The only bigger route by Federer over Nadal in their 13-year rivalry was Federer’s 6-3, 6-0 victory in the 2011 ATP finals in London. Of those 36 matches, six have gone five sets, five have gone four, and most of their matches, like Wednesday’s are in events that play best-of-three sets.

Federer said Tuesday, after his third-round win over Steve Johnson had set up yet another widely anticipated showdown between these two active legends of the sport, that his recent win in Australia, “helps me a little bit.” 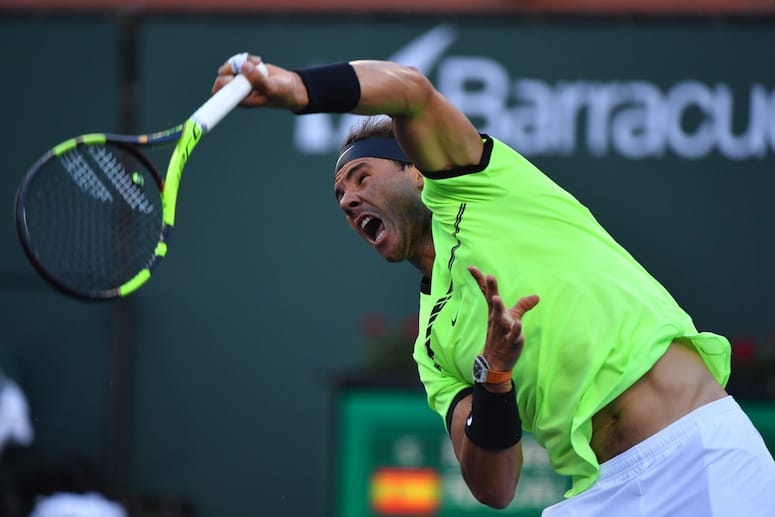 Rafael Nadal’s post-match summary was as flat as his game. “I didn’t play my best match,” he said. “He was better than me.”

He had beaten Nadal in the Australian Open final in five grueling sets. t was the kind of match that the younger, more physical Nadal would be expected to win. Federer’s victory there was a shocker, not least of all, to himself He also said, after acknowledging that the Aussie win might give him a psychological edge, that “at the end of the day, I’m still in my comeback.”

Against Nadal, he came out attacking in the first game. This is a departure from a player who tends to kind of play himself into matches. Not this time. He broke Nadal’s first serve game, broke it again at 1-3 and never looked back. Nadal had the look of somebody who didn’t know what hit him, and that’s not a normal look for the veteran Spaniard. It only took Federer until the third game of the second set to break serve again. By that point, with bullets flying past him on the left and right, it looked as if Nadal’s main goal was to make the match go an hour. It did, barely, at 1:08.

In the end, Federer gave the Indian Wells fan a masterpiece seldom seen here. Or anywhere. He hit winners from every angle.

Federer had a chance at five break points and converted four. Nadal had one but didn’t get it.

Nadal’s post-match summary was as flat as his game.

In the end, Federer gave the Indian Wells fan a masterpiece seldom seen here. Or anywhere. He hit winners from every angle. His newly aggressive backhand, much discussed after his win in Australia, was suddenly a huge weapon, especially given that Federer’s forehand has always been considered the textbook example in the game.

Federer’s majesty on the tennis court, celebrated for so long but expected to be seen now mostly in film clips, was in display once again at Indian Wells. He was Michelangelo, being hoisted to the ceiling with brush and paint. He was American Pharoah, giving us the Triple Crown we thought we’d never see again. He was Clayton Kershaw on the mound, Mike Trout with a bat in his hands.