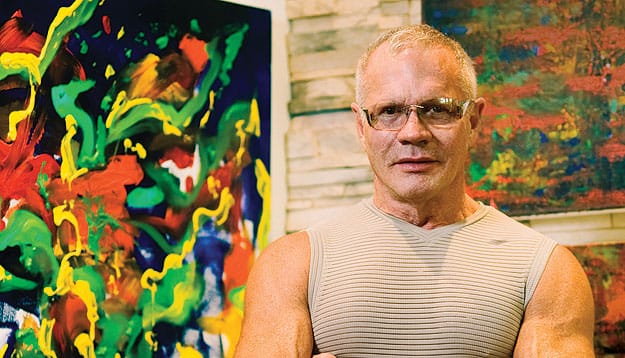 In their 40s, professional photographers Tommy Wu and Alan Reade of Los Angeles were looking for role models.

“We didn’t find as many as we would have liked,” Reade says. “Oh, sure, there’s George Clooney, but he’s one man! So we set out to do a project to inspire people and fight stereotypes about being 50 and older.”

Wu and Reade found seven of their 15 models among Palm Springs residents, including an architect, two artists, two personal trainers and a fitness consultant, and an online business owner.

The men over 50 project involves photo shoots and videos in which the subjects (ranging in age from 50 to 75) discuss such topics as ageism, looking at life from a wiser vantage point, creating community, and manifesting personal power as part of growing older.

“I feel the best in my life now,” says J.R. Roberts in his video. The 51-year-old Palm Springs architect and former mayor of Sausalito notes that he was too intense when he was younger and couldn’t appreciate what he had achieved. “It’s not so much about what you’ve got or what you’ve become, but the friends you’ve gathered along the way,” says the older-and-wiser Roberts. “The things you really want will come to you, but require patience,” he adds. “Maybe that’s one thing we don’t have chemically in our youth is patience.”

The goal of Wu and Reade’s project is “to raise visibility of men (and, by extension, all people) over 50 and to show that 50 means something different now than perhaps it did in decades past,” Reade says. “Many of these men are changing careers, going back to school, and starting new projects because they see 50 as a beginning rather than a time to fade quietly into their twilight years.”

Roberts agreed to be a part of the project because he believed in the message. “We are all living older and we are doing it better, and I think their project is a good way of getting it out there,” he says.

Steve Hodges, a 58-year-old Palm Springs painter featured in the project, dislikes the word “retirement” as it’s typically used. “You can retire from one thing and go on to something else,” he says.

Ted Guice semi-retired from running a wedding and event company in his 40s when he got cancer. Now 54, he works 50 to 55 hours a week as a fitness consultant in Palm Springs.

“I feel good about myself going forward,” he says. “I am just right in the middle of things — not anywhere near the end.”

Wu and Reade plan to eventually turn their personal project into a book. Meanwhile, they have posted the photos and videos on their website: www.tommyandalan.com.