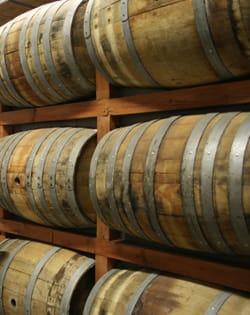 While the Y2K scare and elaborate fireworks displays around the world grabbed the spotlight at the turn of the millennium, a quieter revolution took shape — a backlash, if you will, against oak-aged chardonnays.

Today, many winemakers produce what is called “unoaked” or “no-oak” chardonnay; others make a “low-oak” version. Just like beer producers, a limited number of wineries offer both traditional and “light” chardonnays (fortunately, none seem to have opted for the “lite” spelling).

In addition to barrels, malolactic fermentation leaves a buttery calling card. The process — an inoculation of bacteria that turns malic acid into the softer lactic acid — is often limited or precluded by the winemaker in unoaked chardonnays.

Perhaps the best way to discern the effects of oak aging is to make a grapes-to-grapes comparison of chardonnays by wineries that let consumers have it both ways.

“Tolosa has commonly held back some tank-fermented chardonnay as a blend-back in the estate-bottle wine,” says winemaker Nathan Carlson. “In 2003, there was a tank of stainless-fermented chardonnay that was so tasty we bottled it as a tasting-room-only item. It was very popular. So in 2004, we bottled even a larger amount, which received high praise from wine publications. With 2005, the No-Oak became a whole separate project, with concerted vineyard sourcing and specific winemaking and stylistic goals. I think we hit our mark, with selection by the San Francisco Chronicle Competition as Best of Class for all chardonnay between $15 and $22, taking in oaked and unoaked styles. It has become our best-selling wine.”

Whereas malolactic fermentation is encouraged in two-thirds of Tolosa’s barrel-aged chardonnay, it is blocked in the No-Oak to maintain acidity and minerality.

“Even though this is our lower-priced wine, the viticulture is absolutely fastidious,” Carlson says. “There’s no way to hide bad fruit in a wine as pure as this.”

Carlson attributes chardonnay’s fall from grace in California to a trend toward “very obvious” oak, poor acid balance, and bitterness due to hard pressing. “These wines did not hold up well, did not work with food, and did a lot to turn people off,” he says. Priced at $6 a bottle less than the oak-aged chardonnay, No-Oak wins by-the-glass placement on restaurant wine lists, whereas the oaked wine sells by the bottle.

“The [oaked chardonnay] really appeals to traditionalists, and more so to those who have European palates,” Carlson says.

The two wines are sealed differently (the no-oak with a screw cap and the estate chardonnay with cork) and will age differently.

“The no-oak is so focused on fruit and delicate estery aromatics, which are prone to fading over time,” Carlson says. “What will remain is difficult to say. I am sure that much of the minerality will be present, and the basic structure of the wine is built to age. … I think that I would mostly expect that the no-oak would not take on the honeyed richness of barrel-fermented styles over time.

“That said, it may be a delicious wine with age,” he continues. “I am very confident that it will be around and vibrant for at least the next three to five years. … Typically our wines start to show their best at about two years post-bottling and maintain a very nice plateau for another four to five years. Bottling with high-quality, natural cork allows for a slow oxidation of the wine in bottle. Over time, this will modify the flavors of the wine toward honey, macadamia, custard, and complex floral bouquet.”

“It used to be the big, oaky, buttery chardonnays were the quintessential style,” says President Kristi Brown, “and I think now the pendulum is swinging.

“Our goal [with the unoaked chardonnay] is just to really highlight the fruit. … It’s just chardonnay without much manipulation.”

After fermenting for 10 to 14 days, the wine is left in stainless steel tanks for a couple of months before bottling, with no malolactic fermentation. On the other hand, Tulip Hill raises the temperature in 30 percent of its oak-barreled wine to encourage the secondary fermentation.

“When it comes to chardonnay, it’s a stylistic decision, because you know if you allow your chardonnay to go through that, that people love it or they don’t love it,” Brown says. “This year, for ’06, we did a full-blown, 100 percent malolactic, barrel-fermented reserve. … For us, it’s about having two completely different chardonnays that are at the ends of the spectrum, and you drink them in different situations.” She considers the unoaked chardonnay “a nice barbecue wine” and the reserve chardonnay better with more complex menus.

Tulip Hill’s crisp, unoaked wine displays notes of vibrant pear and apple. The oaked reserve, which is held in a combination of Hungarian and French oak barrels for one year, is richer and softer on the palate.

“They sell about the same,” Brown says. “That’s what is so fun about having two distinct chardonnays. You can have two people standing at the tasting bar and one loves the reserve and one loves the nonreserve, and it has nothing to do with the [$6] price-point difference.”

Kim Crawford has been making both styles of chardonnay since its first vintage in 1996, though the majority of the varietal production goes toward an unoaked version (25,000 cases versus 2,000).

“We believe there are two types of chardonnay drinkers and have backed ourselves with the unoaked, food-friendly style when few wineries made it,” says co-founder Erica Crawford. “In the early 1990s when the Pan-Asian flavor set migrated to London’s West End, it was quite clear that there was a gap for a clean, fruit-drive, premium chardonnay. We really just filled a gap.”

Crawford’s Tietjen-Briant Gisborne chardonnay and Unoaked Marlborough chardonnay are treated similarly until the former is transferred to barrels. The Marlborough stays in tanks for four months, the Gisborne in American oak barrels for five months.

“High acid from New Zealand, and particularly Marlborough, needs malo to make it accessible in the unoaked style,” Crawford explains. “Furthermore, it gives weight and complexity and enhances the chardonnay flavors. The wine can be quite angular and austere without malo. Malo also makes it more fruit-friendly. This wine sits beautifully underneath food — never dominating, always enhancing if well matched.” This second fermentation mingles the aromas of stone fruit and grapefruit with creamy butterscotch. The Gisborne wine suggests white peaches coupled with toasty oak and butterscotch.

Between the two, Crawford sells more of its unoaked chardonnay, which retails for about $9 less than the oaked wine. “For the first seven years, we sold twice as much unoaked in New Zealand and the United Kingdom as [our] sauvignon [blanc],” Crawford says. “Unoaked is still a very strong category here in New Zealand, and I am thrilled to see it getting more attention in the United States.”

A Note on Steel, Wood, and Wine

Gathering some wine-loving friends to compare the differences between the above-mentioned wines, I hoped to find some inherent pattern in oaked and unoaked chardonnays that would label one “an oak person” or “an unoaked person.”

Conclusion: While you can make some generalities about the style of the two varieties of the varietal, it still comes down to whether your palate matches that of the winemaker.

Solution: Don’t limit yourself to one type of wine.

Time in a Barrel

Raise a glass to the Roman Empire for its widespread use of barrels to transport wine from one part of the empire to another. It turned out that the contact between the wood and liquid cargo produced pleasing results: toasty aromas and the flavor of vanilla.

Today, winemakers around the world ferment and age their precious grape juice in American, French, and Eastern European (typically Hungarian) oak. Their choice of wood becomes a part of their signature.

Barrels impart the following color, aroma, and flavor characteristics in wine: coconut, vanilla, smokiness and spice, cloves, butterscotch and caramel with a hint of almond, and astringency.

According to James Waller, author of drink’·ol·o·gy Wine: A Guide to the Grape, barrels lose half of their flavors and tannins during the first use, 3/4 after their second use, 7/8 after their third use, and so on. That makes barrels an expensive component in the winemaker’s toolkit. However, when spent barrels are cut in half, they make really great planters.