Roll Out the Red Carpet 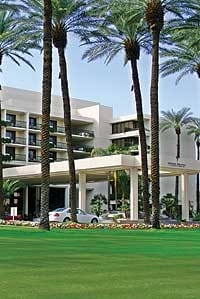 The Entrepreneur of the Year program began 18 years ago when an employee in Ernst & Young’s Milwaukee, Wis., office decided there were a lot of entrepreneurs who were not being recognized for the important economic impact they made on their cities. The program swept across the United States and now is in 38 countries.

The national competition celebrates its 17th year Nov. 18-21 at Desert Springs, a JW Marriott Resort & Spa, in Palm Desert. Last year’s event drew 1,800 regional EOY winners, their management teams, and their families. After the awards’ first three years in Boca Raton, Fla., the event has been held here. The attendees “absolutely love” the locale, says Chris Bruner, Americas director of the Entrepreneur of the Year program.

“I think it’s just the atmosphere in the area, the pizzazz that Palm Springs has,” he says. “Our guests always enjoy coming back, and the Marriott takes very good care of us. It’s just the aura of Palm Springs being a special place.”

Finally, it can’t hurt attendance that Ernst & Young gives attendees plenty of R&R time. Afternoons are open for golf, tennis, spa treatments, and poolside relaxation. “Free time” begins on Friday at 1:30 p.m. after lunch and on Saturday at 11 a.m. The only organized event on Thursday, beyond registration, is a hospitality reception and on Sunday a “getaway brunch.”

But, back to business — the core reason for the program. Ernst & Young, a global leader in financial services, begins the Entrepreneur of the Year selection process with the close of nominations and onsite interviews in April. “We’re really looking for the best companies,” Bruner says. “There’s no requirement that they are [Ernst & Young] clients.” The 35 regional programs across the country average 60 nominations, for a total of more than 2,000 EOY candidates.

In May, independent panels of judges (CEOs) choose regional winners in diverse categories: distribution, manufacturing, and security; financial services; health sciences; media, entertainment, and communications; real estate, hospitality, and construction; retail and consumer products; services (a broad category whose 2005 nominees include Curves and J.D. Power and Associates); technology; and — new this year with sponsorship by Microsoft — Realizing Business Potential. Regional winners, announced in June, are eligible for the national awards.

Next, 42 judges, who include past EOY winners, convene in August at the Kauffman Foundation in Kansas City, Mo., to select not only the winners in the nine categories, but also from among those nine the overall Entrepreneur of the Year. Last year’s winner was John Mackey, CEO of Whole Foods Market.

The distinction of the business leaders is not overlooked by Desert Springs, whose director of event management, Sam Garcia, calls the national awards the resort’s marquee event of the year.

“We do about 100 large conventions a year and maybe 400 smaller events; but out of all of them, this is sort of the granddaddy. And the reason for that is the profile of the audience,” Garcia says. “This is a well-traveled, affluent audience; and the nature of the program is to put forth the conference experience for them that’s worthy of their time ’cause these folks can go anywhere.”

In terms of impact on the hotel, Garcia says attendees fill all 850 guestrooms for three nights. They also fill not only the resort’s five restaurants on Wednesday and Thursday night, but also other local dining venues. A lot of private jets come into the Bermuda Dunes and Million Air airports, he notes, and a lot of the CEOs have second homes at The Vintage Club, PGA West, or Bighorn Golf Club.

Not only has the Entrepreneur of the Year Awards been held here for 14 years, but it also is committed to the resort for three more years after this one. “So in a sense,” Garcia says, “the conference has found a home.”

The event management director notes that the visibility and timing of the event makes an impression on Desert Springs employees. “It’s a lot of excitement for our staff,” he says. “This program really launches our season.”

In May, the national winner will attend the international awards at the Hermitage Hotel in Monte Carlo. Up to 500 people will attend that event while U.S. judges begin looking for next year’s potential winner.